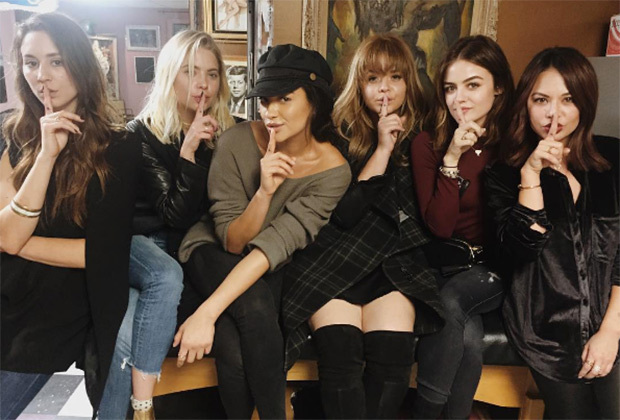 We never thought we’d actually make it to this day but here we are, mere hours from finding out who A.D finally is and ending this game once and for all.

It’s been 7 long, long, LONG years and we’ve gone through so much with the Liars, some of which we don’t even remember because we got lost somewhere in the twists and turns of the Lost Woods.

After tonight’s 2-hour SERIES FINALE of Pretty Little Liars, we will finally have all the answers we’ve been so patiently waiting for.

Aria, Spencer, Hannah, Alison and Emily’s stories will come to an end but these friendships we’ve made, they’ll live on forever. (Hopefully until the movie comes out!)

While we still need to find out who A.D is, there are some other pressing questions still lingering and we need some closure.

I think more fascinating than the ‘who’ is the ‘why’ here. Sure, we were shocked when it was revealed that Charlotte was Uber A but it was more twisted, more mind-blowing to find out why she did what she did. Up until this point, we’ve narrowed down a list of possible suspects, but the backstory, the reasoning behind all the torture is still something we’re having trouble piecing together. Why would someone go through all this trouble to torture 4 small town girls?

2. Who is the father of Emily and Alison’s baby?

Will this person be the same as A.D? We know A.D stole Emily’s eggs and inseminated Alison with them but we don’t exactly know who the other half is. Marlene says both the A.D reveal and the father reveal are “rewarding, satisfying and surprising.” Ah, the anticipation is killing me!

3. How did the mom’s get out of the basement?

No… I won’t let it go. Did they crawl out through a window? Did someone let them out? Do they really not suspect any foul play in Rosewood?

4. What’s The Deal with Bethany Young?

I have to consider that Bethany Young is somehow connected to this A.D madness. If you don’t remember, she’s the girl that’s allegedly in Ali’s grave, was Charlotte’s BFF in Radley and also allegedly killed Toby’s mom. We’ve mentioned her on so many occasions but never actually saw her in teen or adult form…. why?

We know Mona accidentally killed Charlotte but who killed Sara Harvey? Was it A.D because she was getting too close to the truth?

6. How Is Wren Involved?

Wren, who has been in and out of the show since season 1, has to be serving a bigger purpose here. Especially since he was just whispering about something with Spencer in an airport…. why is he back in town? Who is he shooting in the final promo? How has been involved this whole time?

We have a theory about A.D’s identity, which you can READ HERE.