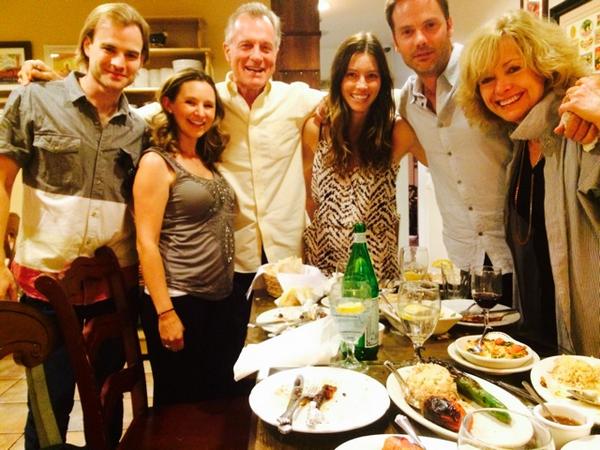 The Camdens are back!

In true Camden fashion, the cast of 7th Heaven reunited this week, over a family dinner.

Actress Beverly Mitchel, who played Lucy, also wrote on Twitter:”Something truly amazing happened last night and my heart is overflowing! Love these peeps more than I can ever explain! Feeling so incredibly blessed to have these incredible people in my life!!! #theresnothinglikefamily #7thheaven #love #blessed.” Missing from the picture is little Ruthie… who isn’t so little anymore. I mean, she posed for Maxim and it was super awkward. Anyways, what was the reunion for? Is their a re-boot in the works? I’m sure no one from the cast would be opposed to doing a reunion episode or two… except maybe Jessica Biel, whose the most famous out the group and married to music super-star Justin Timberlake. Did they get together to watch Jessica Biel guest star on New Girl? That would be cute.

Would you watch a 7th Heaven reunion?

Speaking of reunions. Doesn’t it seem like everything is getting a reunion these days? The 1997 hit movie I Know What You Did Last Summer isn’t getting a reunion per say— although I’d love to see some Sarah Michelle Geller, Freddie Prinze Jr., Ryan Phillippe and Jennifer Love Hewitt try to outrun a murderer again. The teen slasher is getting a reboot! Photo: I Know What You Did Last Summer/Columbia Pictures

I’m sure we won’t be seeing many crop tops– yeah I’m looking at you Hewitt– but we will be seeing a new generation of teens and tweens covering up a homicide and dealing with getting stalked by the fish-hook killer. Although in a world where we have “A” I’m not sure the fish-hook killer is as scary anymore. Will he be modern? Find these teens on Twitter? Stalk them down via Instagram?

Sony pictures teamed up Oculus director Mike Flanagan, with original producer Neal Moritz for the remake. The original made $125 million worldwide, plus got a sequel a year later.

What do you think? Would you want to see a remake with a new generation of teens? Or would you like to see the original cast, take on the killer again? I’m leaning towards the latter.

XoXo– I Know What You Did Last Summer– A. (See what I did there?)

Another 90’s horror flick Scream is returning as well, but this time, to the small-screen. MTV is producing the flick with Bob and Harvey Weinstein. It will also focus on a clique in high school facing a serial killer… so maybe we can do a Rosewood crossover episode?

Really, the 90’s (and early 2000’s) were a great time for movies and T.V. We’re currently celebrating the 20th anniversary of Friends, a.k.a the greatest show on television. Lifetime recently released a tell-all of the show Saved By The Bell, and the hit teen movie Sisterhood of the Traveling Pants is also working on a third movie that follows the clique of girls, 10 years later. And we can’t forget the reboot of Boy Meet’s World– Girl Meets World airing on Disney Channel right now. It got picked up for a second season already.

How To Get Away With Murder First Look!