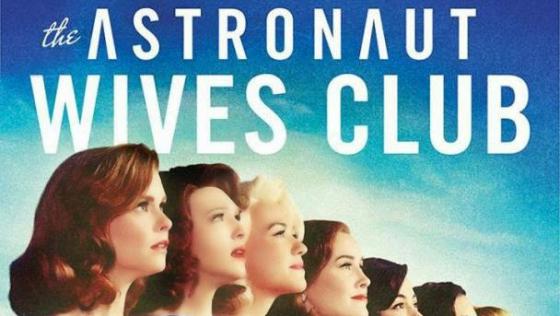 Astronaut Wives Club is ABC’s new drama about the wives of the first space astronauts that’s set in the 60’s. It’s based on the 2013 book called ‘Astro Wives’ by Lily Koppel.

Episode 1 started off with Louise Sheppard watching her husband, the first American man to go up to space and most likely make history. She’s waiting to find out if NASA regains contact with her husband, while the other Astro-families watch in anticipation.

We jump forward to two years prior and get a feel for Louise and Alan. She marches into his office, where he’s no doubt rendezvousing his assistant because she got a call from NASA, where he learns he landed a spot in the team of hopefuls that they’ll try to send up into space.

They head over to a party being thrown by NASA where Louise meets the other wives of the potential astronauts. Watching this I felt like it was a “dirty little housewives” of the 60’s. Unfortunately, it’s nothing like independent shows about women today. These women had goals and dreams that they could not pursue because women at the time were only good for two things- cleaning and raising children. So that’s what they did. They pretended to be perfect and proper while their husbands had extra-marital affairs and they accepted it because god forbid a woman tried to divorce her husband at the time. This is definitely going to lead them down a path of secrets and lies further down in the show. For example, Louise and the LIFE magazine reporter are totally going to get it in and that would be considering shameful… but when her husband sleeps around, he’s a hero. Same with the cars… the guys get fast sports cars, while the women get toilet bowl colored wagons that fit groceries and kids. Seeing this makes me so glad women have come this far in society. I’d love to go and tell those women with dreams to keep dreaming… that one day a woman would go into space and it wouldn’t be outrageous.

Anyways, the ladies are recruited by LIFE magazine and a reporter follows them around because they too are the stars of America now. In all honesty, it’s a bunch of propaganda. They use the women to make everything good and happy in America while trying to beat the Russians to the launch.  It also reminds me of what “reality shows” are nowadays.

Each one feels the need to compete with the other because 1. women in that time were catty as well and 2. they all believed their husbands were the best. Of course, Louise’s husband eventually gets to go up first, a little after the Russian’s send their first man up. We fast forward 2 years and Alan makes it into space and back, much to Louise’s relief. She basks in the glory, meeting the President and the First Lady, but he stands her up at the hotel because he’s going to rest and train for the next mission- becoming the first man on the moon.

Unfortunately, that’s a lie… he’s actually going to boing other girls even though he promised he wouldn’t embarrass her again and she stuck by his side. Sad, really. Louise then realizes she might just need the other housewives who are going through the same thing she is and the ladies get together to party. That’s when Betty Grissom gets a call from her husband Gus that he’s the second man going up to space and Louise feels her pain, but pretends to be happy for her anyways.

Aside from Louise (Dominique McEllington) and Betsy (Joanna Garcia) there is also Rene Carpenter (Yvonne Strahovski) the Marilyn Monroe look alike that loves bold prints and her husband Scott Carpenter (Wilson Bethel) who we don’t know much about. We have Annie Glenn (Azure Parsons) who has a bad stutter when she talks, so she doesn’t because apparently that’s not accepted in the 60’s. She’s married to John Glenn (Sam Reid). Trudy Cooper (Oddette Anable) is Louise’s main competition in the beginning, but she becomes one of her friends towards the end of season one. She’s the one who wants to be a modern day woman and was almost done filing for a divorce from husband Gordon Cooper (Bret Harrison) because he slept with the neighbor. Ultimately she stayed for his career because woman are beautiful souls like that, but any emotional feelings or sex is off the table. Gordon is also Al’s biggest competition. Then there’s Margie Slayton (Erin Cummings) married to Deke Slayton (Kenneth Mitchell) and couple Jo Schirra (Zoe Boyle) and Wally Schirra (Aaron McCusker). Not much is known about these 2 couples yet except that Wally is a goofball and he’s not funny.

So there you have it folks. Did you enjoy the first episode? Will you be tuning in for the rest of the season?

Related Topics:astronaut wives club
Up Next 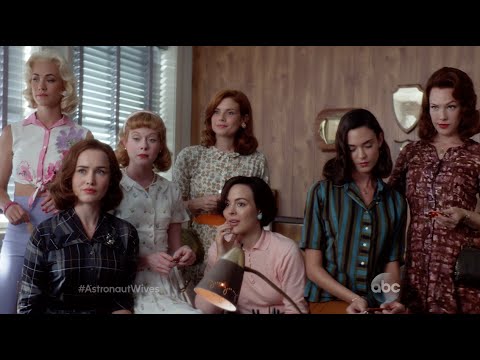 Faith comes into question for the astronaut wives on “Retroattitude.”

Last week, Marge found out Deke had been grounded and his mission postponed. While it seemed like it was because of her previous marriage, it turns out it was because of Deke’s irregular heartbeat. Regardless, she seems wracked with guilt which causes tons of tension for her and the wives. Deke is upset because of how things turned out and gets drunk and picks fights with the other astronauts, telling Scott Carpenter that he doesn’t deserve to be the next man up in the space.

So yes, that means Scott scored the honor to go up next. Thing seem to be going dandy until Rene tells a bunch of paparazzo that she will not be praying for her husband’s safe return to earth. Clearly, religion was a big deal back in the day and this sets press into a frenzy. She’s scolded for not being on her best behavior, but also, for not wanting to retract her statement. None of the wives can figure out why she’s so against church and prayers in the first place.

To escape from the press, she escapes to Cocoa Beach with Trudy Cooper, who runs into her estranged husband Gordon getting a little too close with one of the slutty women at the pool. She freaks out because she gave up on divorcing him in order to launch (literally) his career. If you remember, they were divorcing because he cheated on her with the neighbor. Infidelity seems to be a BIG things during this era despite being frowned upon. Anyways, she flips out because she realizes the houses NASA was gifting them in Texas weren’t set in stone. Gordon told her they could only build 2 rooms because he wanted to get back into bed with her.

She goes out drinking and being kind of flirty with the bartender, which worried me for a bit because doesn’t everyone know who the wives are? That’s what I thought but apparently not because a woman sits down next to Trudy and tells her “he’s not worth it unless he’s an astronaut.” Can you believe there were women who preyed on these men with a dream? Gold diggers I tell you. They are the Kardashians of that era. Trudy pulls information from this woman about which guy is the easiest. Turns out Sheppard (Louise’s husband) is the easiest screw. Gordon however, is the one no woman wants to mess with because he puts on a macho act for the guys and then talks about how much he loves his wife all night. Awwww. This proves to Trudy that Gordon really does love her and she semi-forgives him and tells him she’ll move to Texas with him.

Meanwhile, the wives try to convince Rene to twist the story for Life magazine before Scott goes up. She doesn’t budge however and escapes to watch the launch by herself in a beach house. Everything seems to be going fine until base looses signal with Scott’s ship. Thankfully, Annie comes to watch with Rene after realizing that no matter what, she had to be there for her friend because her friend was there for her when the whole “speech” thing was going down.

Thankfully, they get contact with Scott again, who drifted 250 miles off course. Why? Because he wanted to inspect some yellow “lightning bugs” which turned out to be urine. Yep, he almost died for pee. Seeing Rene and him in the bathtub in the end just celebrating with champagne was delightful. There’s some marriages worth fighting for.

In the end, he convinced her to write her article and mention her baby boy, who died at 6 months in his crib sleeping. That’s the reason she wouldn’t pray she reveals to Annie. In the article, she explains how she believes in faith, leading an interesting life, embracing the wives and loving her kids, the ones here and the ones gone to soon. Her article narrates the move the couples make to Texas, where everything is bigger.

Meanwhile, Wally Schirra reveals his time has finally come and that he’ll be going up to space next. Wally was supposed to go up in Deke’s place but the “process” chose Scott instead. He tells Jo to trust the process, but she doesn’t. Her views change when he’s picked for a nine-hour mission however.

And while this didn’t play a huge part in the episode, Louise seems to be developing feelings for the reporter Max. He visits her one late night seeking advice about the article but it’s clear, he wants more. She returns the house call at Cocoa Beach, but she finds him with another woman. She’s clearly thrown off and upset by this. Awkward. Later on at the party, Max admits he wants to write more about Sheppard so he can spend more time with her, but she brushes it off, clearly not comfortable with her feelings for him or the fact that she loves someone other than her husband. This is totally going to go down however and I don’t think she should feel bad. After all, Sheppard is the easiest guy on the team according to the women at Cocoa Beach right?

Are you loving this show? Sound off in the comments!