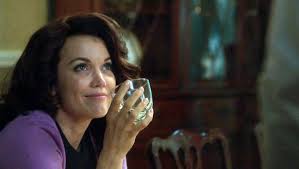 Fans are squirming around in their seats for some Scandal spoilers/scoop, or really any info about Kerry Washington and her baby. Unfortunately, it doesn’t look like we’re going to get much of anything!

Bellamy Young, who plays Mellie, revealed to US Weekly that she’s not allowed to talk about Kerry Washington or her recently born baby girl on the red carpet. Consider her privacy, handled.

When asked about her co-stars bundle of joy, TV’s First Lady responded, “We can’t talk about Kerry on the carpet.” How rude!

Bellamy can speak out about her character though, who we saw constantly clutching a glass of booze this season. Yeah, being married to the President of the United States can do that to you. Especially when he’s in love with another woman, that you don’t really hate.

She admitted that she’s not one bit shocked with Mellie’s addiction to alcohol. “Hooch, baby, hooch,” she said. “Mellie doesn’t play. She goes to the source.” (But literally, how can you not LOVE her?!)

Playing Mellie in an inhibited state was thrilling for Bellamy, who was able to explore the character who sober, looks completely put together, but drunk shows her troubles and demons. She’s a woman scorned and you never know what she will do.

“I have loved drunk Mellie so much. I mean, I love pregnant Mellie too, don’t get me wrong. When she’s drunk, all bets are off. It’s so fun to see her be that girl. And you see a little bit more of maybe why they got together or how they got together, ’cause otherwise you’re like, how did they even kiss?,” she told The Los Angeles Times.

It’s true, seeing Mellie and the president affectionate is a rare sighting but it might be becoming more common now that Fitz has been re-elected, which means he can’t divorce his wife for the next four years. Olivia also up and left his campaign and ran away with Jake, which will definitely take a major toll on him. The death of their son might also bond the estranged couple, but it could lead to more drinking for Mellie. To be honest, I don’t think she’s sobering up anytime soon.

“I don’t know what’s ahead,” she said. “We tried to put her drinking down once we lost our son. I loved how Fitz took care of me in that.”

You gain some, you loose some. All we know is that there’s been absolutely no news on the Scandal front, so hearing that the unsung hero might continue to drink her sorrows away, is kind of thrilling news…..