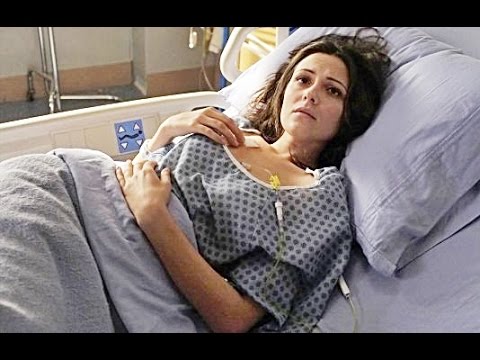 Yes, the summer finale of Chasing Life just aired, but we already have scoop on what to expect when the second part of season 1 returns.

While most of the first half of the season and the finale focused on April’s cancer–discovery, acceptance, treatment– most of 1b will focus on the other characters in Aprils life. Executive producer Sean Smith told Zap2It that we should definitely expect more Brenna and Greer despite her parent’s forbidding the girls from seeing each other. “When we pick up after our time jump, we do address their relationship. Greer is back, but it’s made complicated by their parents, which takes us to this place that we’re all really excited about — telling the story of Juliet and Juliet. Brenna’s such a rule-breaker and having her do that before sort of for evil instead of good, now it’s for the best of intentions while she tries to maintain a relationship with Greer despite their parents being against it.”

Brenna will also try to reconcile her friendship with Ford– although it might be a little harder than she thought. “We’ll see them try to reconcile. It’s a little bit deeper in to the 10. We really thought that we had lost the actress Dylan Gelula to ‘Jennifer Falls,’ but they ended up shooting across the street from us, so by the time we were coming back into production for these 10, we realized that she was available to us — and we missed her. We really wanted to get back into that friendship that Brenna and Ford had and how that plays into Brenna’s relationship with Greer, so we’ll see Kieran, we’ll see Ford and we’ll see Greer.”

Will Thomas Carver make a comeback? Quite possibly. Obviously he’s deceased so he won’t be rising from the dead, but he will be appearing in flashbacks to help guide the Natalie Ortiz story along. “We would love to go there. We didn’t have the opportunity in these back 10 episodes, but it’s something we would love — to understand Thomas Carver more and as we get more into his back story with Natalie and their relationship, I think it’s definitely fertile for much more of our series.”
Natalie Ortiz will be back in 1b in a “big way,” which I’m assuming means she’s going to be April’s donor. Raquel might’ve found some humanity when it came to April’s cancer but that doesn’t mean she’s going to stop from trying to excel at work. Sarah and Uncle George’s history will be explained more thoroughly. Will they get back together though? I think their cute but it might a little weird.

What about Leo Hendrie? Does he die? Does he live? You don’t have to wait till January to get the answer to that!

While the second part of season 1 premieres in January, the holiday episode will air during ABC Family’s 25 Days of Christmas that reveals Leo Hendrie’s fate. Did he die? Did he decide to remove the tumor?

“You definitely know the outcome in our holiday episode, which picks up right where we leave off in the finale.It was always kind of by design that we wanted to have this moment of fear and ambiguity over which way Leo is going. You’ll know the answer in December.”(I’m leaning towards he’s getting the tumor removed and him and April will fall madly in love. Suck it Dominick!)

Most of 1b is much more lighthearted. The holiday episode starts off after April’s month in the hospital. She’s going back to work and trying to enjoy her life and have fun, although she’s constantly wondering if the chemo was successful.

“How effective was the chemo in getting rid of her cancer but also keeping it away? She is out of the hospital. The next 10 after the Christmas episode will pick up with her first day returning to work and the fallout of everything with Dominick. She’ll try to find some normalcy while she’s waiting to see if her cancer returns,” said Sean.

Italia Ricci, who plays April, added, “It’s not quite as emotionally draining as the first half [of the season]. Almost all of the bad news has been pretty well dealt with, so the writers wanted to have April have a little more fun. She gets to try and live a normal life again. She goes out and gets wasted, she tries pot, she does really, really bad karaoke that I apologize for. [ laughs] She tries to live it up and they spend more time on everybody else’s stories, but there’s the undertone of her constantly worrying that she’ll relapse, and having to deal with still being around Dominick at work.”

Once Upon A Time Extended Season Four Spoilers!