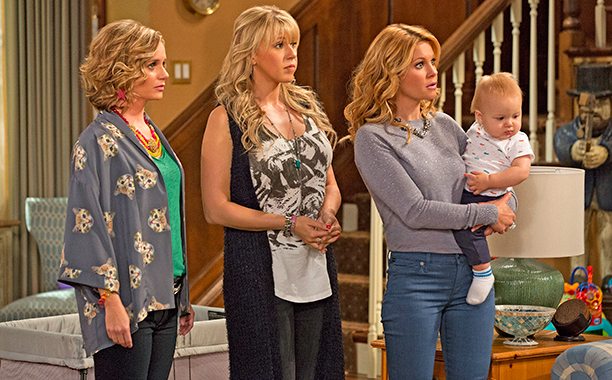 When Netflix announced a Full House reboot, the 90s kid in me could not wait. When it was finally released on Friday, Feb 26, I rushed home to take a trip down memory lane in a spaceship that would take me back to the Tanner House in San Francisco. Fuller House does not disappoint the original fans. I’ve read many reviews that bash the revival and all I can say is, what did you expect? Fuller House is exactly like Full House – wholesome cheesy family television. It’s an ode to the original fans and everything I would expect. Jesse singing Elvis songs, Danny obsessively cleaning the house, Stephanie dancing, Joey bringing out Mr. Woodchuck, Kimmy airing her smelly feet, Becky being the best wife to everyones uncle, and DJ struggling to be a single mom just like her dad had all these years before. I was finally home and it felt better than ever.

Of course, the season did come with some lows and I won’t ignore those just because I’m a die hard Fuller House fan.

Opening Sequence – Whoever thought of the opening sequence was straight up brilliant. Of course we want to see how all of these characters progressed. We’ve know DJ and Steph since they were toddlers – and now they’re grown women. As for the rest of the cast members, having them replicate their opening credits in the present was chock full of nostalgia. I’d lie if I didn’t share a tear or two.

Nostalgia – That was definitely present throughout the whole 13-episode run. Jesse singing “Forever” his wedding song for Becky, the family singing “Flinstones” to help Tommy go to sleep, just like they did with Michelle. Stephanie brining up her “husband” Harry Takayama and things so simple as the old sets and the cheesy catchphrases. Yes, I screamed a little when Jesse uttered “have mercy,” or when Steph said “how rude.” Even when DJ said her less famous “my lanta.”

Plot- The show begins with DJ Fuller living at the old Tanner house as her dad Danny helps her raise her kids after firefighter husband Tommy’s death. The whole family reunites before DJ realizes she’s on her own with these three boys. When she has a breakdown over the baby monitor, Stephanie and Kimmy step up to help, vowing to move in with DJ to hold the fort down, similar to when Jesse and Joey moved in to help Danny raise his 3 daughters after his wife died.

Kimmy/ Ramona/ Fernando- Kimmy, who by the way hasn’t changed a bit because she still wears ridiculous outfits and is stuck in the 90s, now has a daughter Ramona who is very reluctant to move in with the Fuller’s because they are the “whitest family on the block.” Overtime, she forms a nice bond with DJ’s boys Max and Jackson and eventually doesn’t want to move out of the house. Meanwhile Kimmy files for a divorce from her cheating yet seductive husband Fernando, only to fall back in love with him and get reengaged. When she walks down the aisle again, she gets cold feet and settles to be engaged for an unkown period of time. She realizes she like living with DJ and Steph (the wolfpack) way too much.

DJ & the kids – DJ works as a veteranarian while raising her 3 boys. She gladly accepts help from Kimmy and Steph who throw her back into the dating game. That game includes the her boss’s hot son Matt and her old high school sweetheart Steve, who will do ANYTHING to get back at her. After she’s caught making out with both of them, she has to choose one. The whole thing goes down like the bachelorette but in the end she picks herself. She’s clearly not ready to chose a guy and it’s understandable – she’s newly widowed. It was fun seeing DJ and Steve reunite and go back to their old high school romance but if I had to have DJ choose, I’d tell her to go with Matt. Sometimes, the past needs to be left in the past and Steve’s a bit of a clinger… you know?

Steph- Always the musical one in the family, Steph has traveled all over the world working on her music career. She puts that all aside to help her sister raise a family. Some of the best and worst moments happen with Stephs character! The best: we see her date 3 men at a time including a baseball player who seems to strike out because of his relationship with her. She’s also getting the hang of raising children and is broke as a joke (I feel ya girl) so she gets a job at Kimmy’s party planning company. The worst part – that dreaded Coachella episode. There is no way ANY of that would have happened. Would Steph, a lowkey artist, ever get to play the mainstage? No. Would she ever hear her phone when Max called? No! Would she really play his “trumpet” music to the crowd? HECK NO! I always give shows like this the benefit of the doubt, but even this was a stretch! Seriously guys?

We also find out Steph can’t have any kids, which is kind of a sad blow considering she comes from this big family. But DJ is the Danny of the group, Kimmy seems to be the Jesse, so Steph is definitely the Joey. Maybe that’s why we never heard anything about Joey’s family or kids?

The rest of the OG cast – Joey is still rocking pajamas at 55 and doing stand up comedy. It’s classic and I love how they stayed true to his character. Jesse hasn’t aged a bit, rocking his leather jacket and being completely in love with wife Becky, who he renewed his vows too. Their twins are also all grown up and in college – how wild is that? Danny still has OCD, I’m happy to hear, and he’s also settled down with a woman. His morning show is also still going strong… so strong that they just got hired nationally for Wake Up USA! Go Team! Throughout the 13 episodes, they all come back in some way to help DJ babysit and teach the kids some kind of lessons. You didn’t think we’d have a reboot without wholesome family value lessons and A LOT of group hugs right? That’s a staple in the Tanner/Fuller household!

Michelle Tanner – While Michelle didn’t make an appearance for Fuller House, her spirit was very much alive. Would she be happy about it? Well, that’s questionable. In the very first episode, the whole cast calls out the Olsen twins when explaining that Michelle couldn’t come home because she’s too busy working on her fashion line in New York. Cue the blank stare the TV screen. Savage! Later on in the season, Kimmy is buying Ramona a birthday dress and she says its from the Elizabeth Olsen collection by Mary Kate and Ashley. “With these prices, no wonder they don’t have to act anymore,” she explains. Savage x2! Another great nod – when Steph is changing Tommy’s diaper and she recalls changing Michelle’s so much, she could of sworn there was two of them. That was actually cute. And lastly, when the *she-wolf* pack got drunk during Kimmy’s bachelorette and called Michelle. Obviously they reached voicemail but that didn’t stop them from reciting all of Michelle’s catchphrases.

With all of that, I’m still not upset the twins didn’t reprise their role. Not that it wouldn’t be great to see Michelle back, but the show worked really well without her. She wasn’t needed. At one point – I forgot she was even part of the family. The trio dynamic of Kimmy, Steph and DJ worked really well, especially because it mimicked Danny, Jesse and Joey raising their own set of kids in the same exact household… a household that’s worth A LOT more nowadays then it used to be.

Overall, Fuller House managed to capture the same magic Full House did so many years ago. Somehow, the writers managed to make reference to things that made sense in the past, like the Spice Girls, but also incorporated the present – kids on their cellphones and the word fleek. If you ever wondered how the cast of the show would do in the future, now you know.

The season didn’t finish in a way that said “this is the end.” In fact, I think it ended with a “we’ll see you soon,” so I’m putting it out there – I am 100% down for another season of Fuller House. Bring it on – bring on several more seasons. The show proved that while from the past, it’s still relevant today so why not? I’ve seen comedies on network television that are way worse than this show, so I’m saying it now – I can’t wait for a second season of Fuller House – haters not welcome! The show may have been hoping for the nostalgia of the millenials but really, it was just giving us exactly what we wanted. What a time to be alive.

Related Topics:Fuller House
Up Next