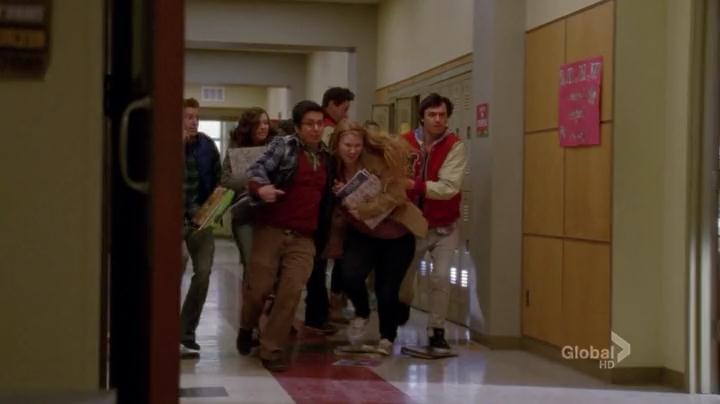 Glee decided to dedicate an episode to the Sandy Hook Elementary, re-enacting the shooting, just four short months after 26 kids and teachers were gunned down. The episode titled “Shooting Star”  forever changed the students at McKinley High as gunshots rang down the halls. 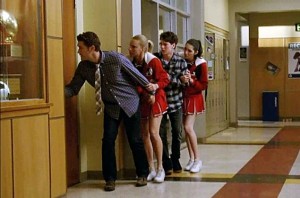 During choir practice, a gunshot was fired. The choir teacher, played by Matthew Morrisey, gathered all the students in the choir room where he asked them to tweet and text their loved ones. Lots of ‘I Love You’s’ were exchanged. The episode showed how different students dealt with the situation of a potential shooter in the school.

The cheerleading coach, Sue, played by Jane Lynch eventually turned herself in claiming she had the gun for safety and it was registered. She than revealed that the gun belonged to a student, with down syndrome who brought the gun to stop the bullies. As Sylvester tried to stop her and take the gun, she fired two gun shots.

I know this is a very brief summary of last nights episode, but it has caused much uproar. The episode was like any other before and with such a sensitive topic, it caused much controversy. Fans took to twitter to state their opinoins. While some people thought the episode was very educating and done tastefully. Others say that a situation like that is not of entertainment value and that the show crossed the line. I can understand why people were a little upset though. Glee doesn’t do serious very well, amongst its jokey atmosphere and singing musical acts. It also addressed the gun issues raised in our state. 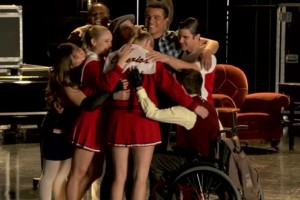 The director exclaimed that he was very excited for the episode and that it was one of the most powerful and emotional episodes. It comes at a very interesting time with all the government gun talk. The episode targeted that a little bit when Sylvester’s character talked about how their trying to ban guns, when in reality time are changing and no one feel safe anymore. It also caused a little tension because Sylvester was fired even though she lied to protect a student. The student also stated she was dealing with a serious issue, bullying.

What I believe Glee failed to do, was give a expand on the reason for the student and the fake shooting. Sure, there was a girl who felt scared so she had a gun, but there was no value to that story; no meat. It was an episode that built up so much sadness and tension, just to have it evaporate and pretty much slide over the real reason that people actually do these things.

Also, some might say that shootings and tragedies are not entertainment value, but in Glee’s defense, One Tree Hill also did a shooting episode, that tied the shooting at a high school to their plot. It was one of the saddest and most emotional episodes in Tree Hill history, but it taught valuable lessons. The episode did nothing to poke fun of the situation, but explained that this could happen anywhere at anytime.

Many people think guns are bad, but there are of course two sides to every story. Gun’s are also protection. Gun’s can get into the wrong hands. I believe the episode showed a well-rounded explanation of the situation. It also might have been a little too soon for an episode like this, just months after about 20 young children died.  Do you think a different show would be better at the hot topic of school shootings? Did you like the episode? 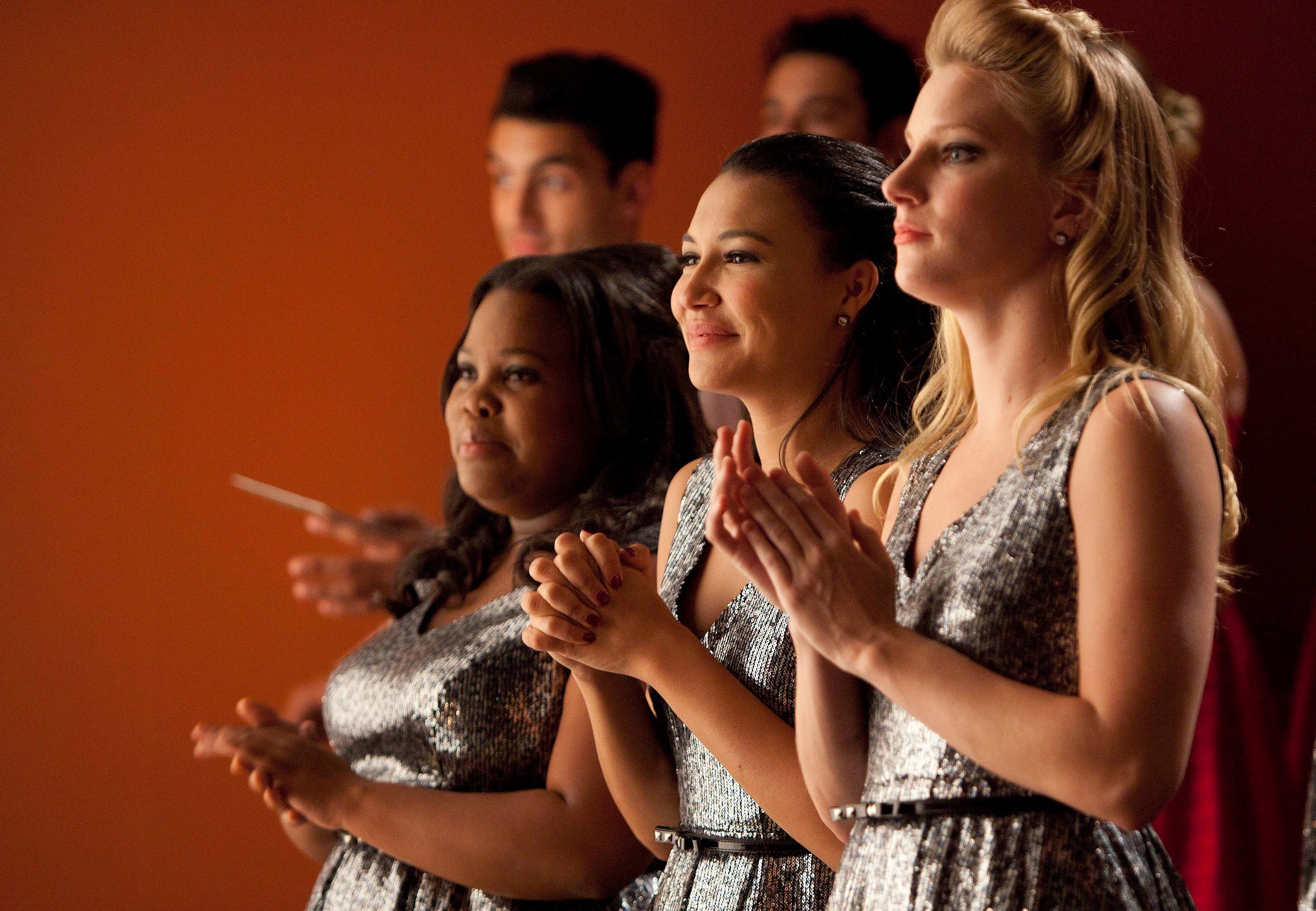 The Glee cast is coming together in support of Naya Rivera.

After authorities confirmed the body of Naya Rivera was found at Lake Piru concluding a 6-day search,Jane Lynch, who played Sue Silverman, tweeted “rest sweet, Naya. What a force you were. Love and peace to your family. ”

Rest sweet, Naya. What a force you were. Love and peace to your family.

Other cast members Amber Riley and Kevin McHale asked the fanbase to show some compassion in light of the tragic events.

“Show some respect. All our energy is going toward helping find Naya and praying for her safe return and for her family,” Riley wrote on Twitter. “No one owes anyone online a performance of grief. This is very real and devastating. Focus on Naya and her family. Not us. We don’t matter right now.”

“I cannot begin to understand what Naya’s family must be feeling. I know the rest of us are completely shattered, but not without hope. Please respect her family & their privacy in this moment. Please refrain from judging those who don’t show their pain on social media.”

I cannot begin to understand what Naya’s family must be feeling. I know the rest of us are completely shattered, but not without hope. Please respect her family & their privacy in this moment. Please refrain from judging those who don’t show their pain on social media. ♥️ https://t.co/DXsUj3qdCh

The comments defended Lea Michele’s silence in the wake of Rivera’s disappearance. Fans called her out for not speaking out, which forced her to delete her Twitter account.

Earlier this year, Michele was dragged for comments made by former actress Samantha Ware who said the actress was a bully and made her life a “living hell.” The comments were supported by other members of the cast.

Heather Morris also updated fans writing:
“I have spoken to Sheriff Eric Buschow and rest assured they are using every single one of their resources to locate our Naya. I have full confidence that they’re doing everything they can, and probably more. We will hold off on the citizen search and rescue until we get the go ahead that they’ll allow volunteers. Understand it’s 110 degrees here and if you’re not highly trained in search and rescue, this could end up a much more dangerous situation for everybody involved. Please be kind, compassionate and caring for those who are looking for our Naya.”

Ahead that they’ll allow volunteers. Understand it’s 110 degrees here and if you’re not highly trained in search and rescue, this could end up a much more dangerous situation for everybody involved. Please be kind, compassionate and caring for those who are looking for our Naya

Earlier today, authorities revealed they found a body at Lake Piru where Rivera was last seen.

The timing is chilling considering today marks 7 years since Corey Monteith overdosed at the age of 31. Many fans have pointed to a Glee curse placed on the cast as Rivera marks the third cast member to die in her 30s. In addition to Rivera and Monteith, Mark Salling committed suicide in 2018 at the age of 35 after pleading guilty to child pornography. 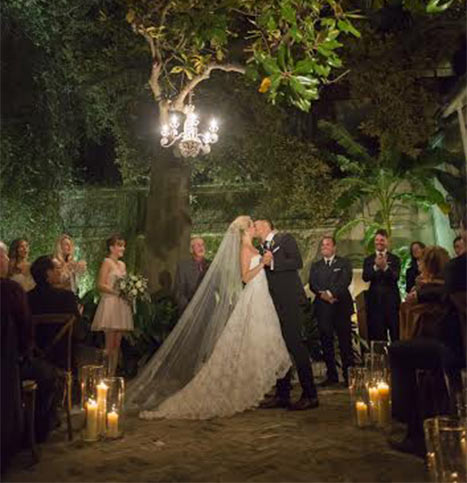 Paul Wesley, Nina Dobrev, producer Julie Plec, Kat Graham, Michael Trevino and Claire Holt, were all on-hand to help the new Mrs. King celebrate her big day  Former co-star, Kayla Ewell was even a bridesmaid! Throughout the weekend, the stars of TVD and The Originals shared pictures of their mini-vacation.

Co-star Ian Somerhalder could not make it, but he sent the couple a heartfelt message on Instagram writing, “”Candace and Joe- my brother, my sister. What a magical day this is for both of you. From the eye of the storm I am still with you in spirit!”I am missing my home state of Louisiana and my city, the great city of New Orleans. Sending you so much love from my shoot in ATL- i’m working hard & I wish I could be there physically, but we have the rest of our lives to celebrate. I love you guys! So. Much.” The couple got engaged in May 2013 in Florence Italy. This is the first marriage for Accola. King shares two daughters with his ex-wife Julie.

They met at the DirecTV’s Celebrity BeachBowl in 2012, after co-star Nina Dobrev talked to King for Accola, who was too shy.

The newlyweds shared their first pictures after tying the knot on Instagram. The black-and-white photos captured the aura of the happy day, showing the newlyweds during their first dance and kissing in front of their guests.

Accola, 27, wore a Monique Lhuillier gown. The groom rocked a Tom Ford tux for the “French Quarter Wedding.”We hope the bride got permission from Klaus and Marcel for the party, as they tend to have some good old fashioned fights in the quarter. The celebration kicked off with a parade through the streets of New Orleans. Accola traded in the traditional veil for a princess tiara for the after-party. The other photo was shared via King’s Instagram. “My wife, she makes me wanna dance,” he captioned the photo.

It was a small affair, with about 50 family members and friends who arrived in Hawaii earlier this week.

“I’m very happy. Renee’s not in the industry — I need that normality. We like to stay home and cook, we’re not that Hollywood,” the actor told Closer magazine.

They were first spotted together in 2011. He popped the question last summer, tweeting that he was going to marry his best friend.

This is the first marriage for both.