Gossip Girl- I am Number Nine

“Because there’s no going back now. And it looks like this ones going to be the ride of our lives.”


Scandalous Upper East Side it is! An episode full of mischief and emotion and in Gossip Girl world that means its an episode well done.

Charlie seems to have no boundaries. She really does work for what she gets. After stopping by Blairs and realizing she had a potential story on her hands she turned over her mediocre work to Nate and dove head first into Blairs ridiculous bridesmaid competition. The last challenege- kissing New Yorks most eligible bachelor (or not) Nate. Charlie definately had the upper hand on this one being his co-worker and the fact that he wanted to make his significant other jealous worked in her benefit. But wait, his significant other is also her boss. The one thats threatening to expose her. So although she got into Blairs wedding, she has is now even more on the negative side with Diana and obviously not Nates favorite person (considering she played him and used him). But something tells me that Charlie has the hots for Mr. Archibald, and he wouldn’t have been so hurt if the feeling wasnt mutual. Finally falling for someone his own age, regardless if shes a compulsive liar, its still progress.

Blair went back to being crazy, mean, insulting, high-school steps Blair and boy have we missed her. After getting a pass from her Prince to do as she wanted for the day she got right down to having her minions compete for a spot in her royal wedding.  But will there even be a royal wedding at this point? I mean in order to prove how good and honorable Louie is to Blair he kind of shot himself in the foot especially when she looked at him and said “Chuck destroys everything and everybody in his life and that will never change, but whats scaring me is that your changing into him”. I guess thats the effect the Upper East Side has on even the most humble people. Louie wanted the best to prove to Blair that Chuck was the wrong choice for her, but all he ended up doing was showing her that he could become a monster just like Chuck. Its also not working in his benefit that the therapist told Chuck that Louie wanted her to drive Chuck into a rage to turn him into a monster he used to be because hes threathened by him. This information along with the her insight on how Chuck has the potential to change and become a better person by letting go helped him to finally go to Blair and apoligize for everything he ever did to hurt or wrong her and for the things he never told her, for example that he loved her. This new side of Chuck had major impact on Queen B who secluded herself in the end and sort of had tears in her eyes. She really cannot give Chuck up and for good reason. There was never a man that loved her more then he did, and still does. He is her prince, not Louie. There is always a struggle between the perfect guy and the right guy, I just hope she finally realizes which one she belongs with before its too late and Chuck walks away forever.

Serena is asking for troubling meddling in between her boss and Diana and killing Dan’s movie. Of course she wants to be a friend and protect him so I guess killing the movie idea was a good thing, but manipulating Jane into doing so might have not been the smartest move. Now as she’s joining Diana at the NYspectator is she going to try to turn over Gossip Girl? Does the mean the series might eventually be coming to an end? Seems like this week the ex power couple fell of their high horses and landed straight on their ass. She lost a job that was important to her and Dan, well he’s off the bestseller list and has no movie in the making.

Other Thoughts
-Anyone think they should bring back Lil J for the holiday season? I’m a little upset that they aren’t making any holiday episodes.
-I wonder how Vanessa is doing… wherever she is.
-Since there is a date for Blairs wedding episode (which marks GG 100th eppy) does that mean she goes through with it? Or will Chuck be the groom?
-It was sweet to see Blair in dual roles. She is bitchy Queen B and then Chuck tells her shes always there for the people she loves. Beautiful.

Gossip Girl- The Fasting and the Furious 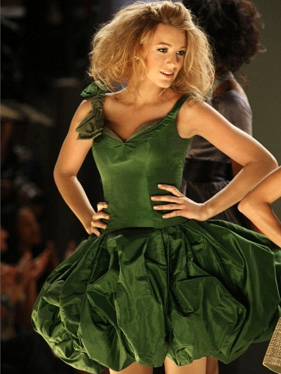