Gossip Girls return this week was a huge stretch from the anticipated. Seeing Chuck back on his feet and safe was a realization that the Gossip Girl writers know exactly what they are doing as they strayed from having 9 episodes involving Chuck in a hospital bed and got straight to the point. (Hint last season of One Tree Hill). One annoyance I must point out is the constant struggle that Blair faces internally between being with Louie and with Chuck. The decision is fairly obvious- be with the man you love, the one you spend all your time thinking about and the one you base your life decisions around. And that is not Louie. Yet another part of me can’t help but melt at the fact that a love so pure exists that Blair is willing to give up her own happiness for the sake of Chuck.

The introduction to Blair as a Catholic though was downright hilarious if not poorly constructed. Converting to Catholisim because your husband believes in it is explainable. Converting because you belive that God helped you out when you asked for it is also explainable, but if you don’t believe in him for the first 22 years of your life, the chances of that happening are kind of unbelievable. But straying from the rant on religion, the fact that she is converting because she wants to keep the man she loves safe while she marries another one because she thinks God will take Chucks life if she goes back to him is downright ridiculous. My understanding is that God wants you to be happy and happiness is with Chuck obviously. The fact that he got almost hit by a cab just means that Chuck Bass should look both ways before crossing the street and stop talking on the cellphone while doing so.

Thirdly, Bass deserves and explanation in all of this. Why lie to someone and keep them hooked and have your best friends lie for you. Humphries is already invested in Blairs life more than his own, this being he even has a life of his own and now Serena is in the lying game. Not to mention the two were put in the most akward situation since their “siblings” and “ex’s.” That look on Serena’s face after the midnight kiss was most likely just a sneak peak at the soon to be Dan and Serena love story take 19? Anyone still think its a good idea? Yeah, didn’t think so.

The Nate and Gossip Girl partnership, is a mighty fine addition to the season though as my interest in who Gossip Girl is, is peaking. If it is never revealed I might just regret the past couple of years of my life. But more to the point here comes my wise prediction for the next couple of episodes. Nate will figure out that the car was actually intended for him. He will tell Blair this on her wedding day, she will make a realization that God actually wants her to be with Chuck since this wasn’t her fate, she will leave Louie at the alter and all will be forgiven. Don’t say I didn’t warn you…

The biggest mystery though lies with Charlie Rhodes. The idea was that either the real Charlie Rhodes didn’t exist or that her and Carol had a falling out, but after seeing the real Charlie today its quite clear that she loves her mother very much, I mean you only keep pictures in your wallet of the people that mean a lot to you. So why hide her from the rest of the family and hire a decoy? Is it because Carol never wanted her perfect daughter (hint hint she goes to Juliard) to be sucked into the UPE lifestyle like fake Charlie did? Did she only use fake Charlie to get real Charlie’s money to fund her schooling in Juliard? This Rhode’s Riddle is impossible to solve, but with the help of a private investigator it shouldn’t take long. Too bad Carol wasn’t one step ahead of everybody else like maybe changing her daughters name or something. This would have never passed on Revenge….

And I wanna fall in love with you

Related Topics:Gossip Girl The End of the affair? Season 5 Episode 11 Blair and Dan Quotes Pictures Music Review Wedding
Up Next

Gossip Girl- Father of the Bride 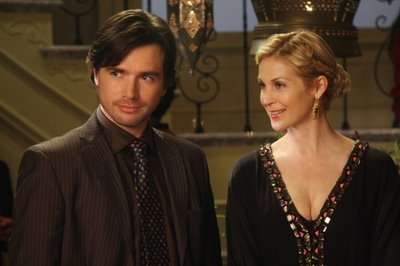