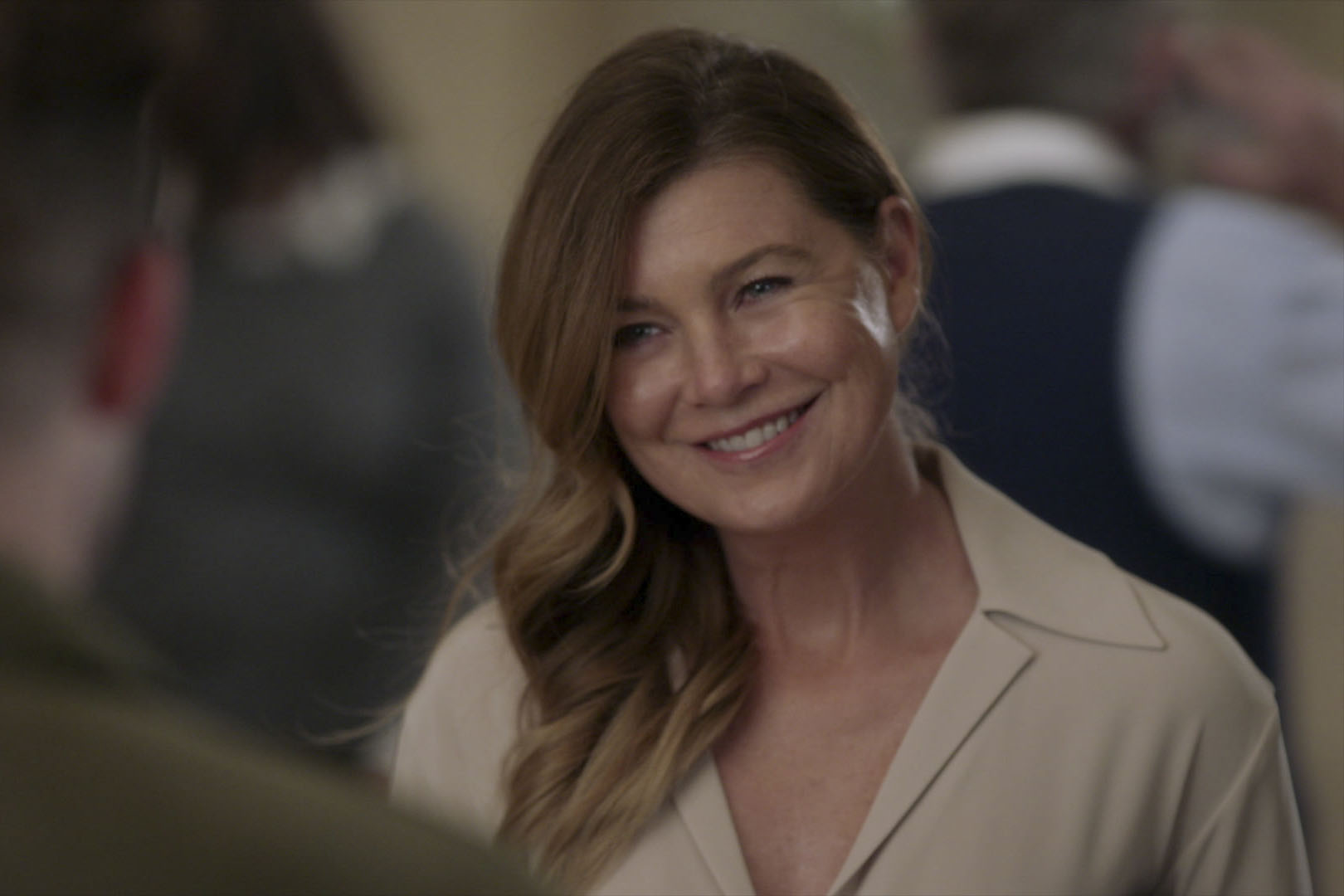 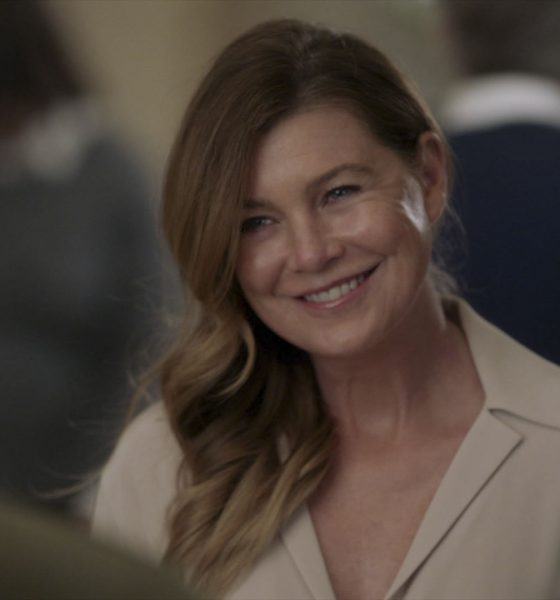 Ok, Grey’s Anatomy, I see what you’re doing! It really felt like the writers went back and rewatched old episodes. And just as Bailey said, it “feels like the old days.”

After a dull season premiere, Grey’s Anatomy, “Some Kind of Tomorrow,” was a breath of fresh air. Meredith’s got a sexy new romance going, interns are competing for surgeries, and doctors are fighting the big fight.

Even as Meredith’s fighting hard not to get sucked into the Midwestern fever dream, she can’t help but give into Nick’s sweet advances. If Nick’s going to be a series regular, we need Meredith to stay in Minnesota for a bit longer.

And to make it worthwhile for the show to focus on two separate locations, they had to bring another character with Meredith. Who better than Amelia? 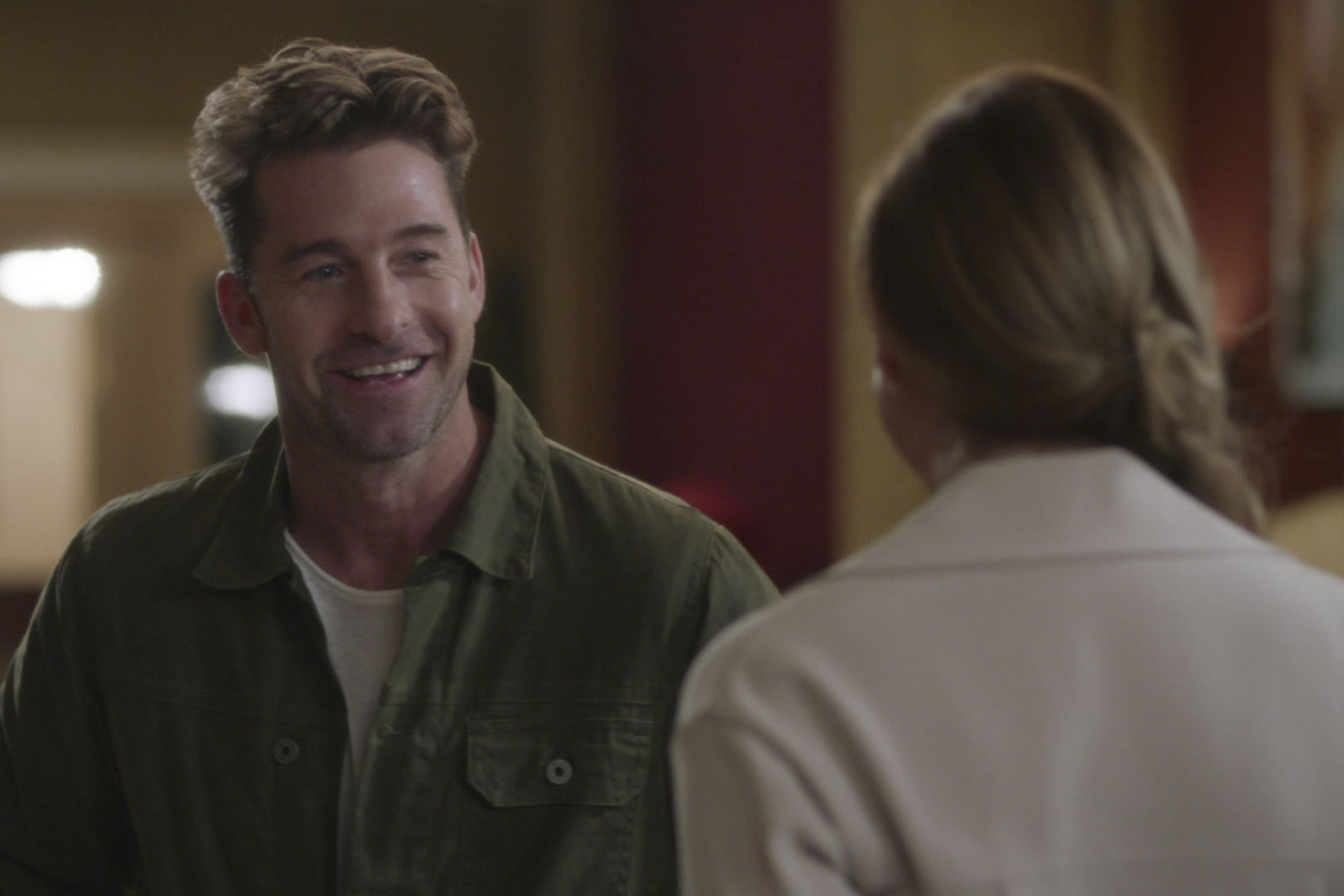 Nick and Meredith on Grey’s Anatomy. Photo courtesy of ABC

So, as Meredith’s wrestling against every desire to say yes to the most significant offer, Amelia’s there as a devil’s advocate to remind her what this moment means for them and science.

Meanwhile, back in Seattle, Bailey’s working hard to secure doctors as her current numbers are dwindling. And since it’s hard for her to secure doctors that want to work with lagging interns, Richard is back in the saddle preparing his interns for battle.

With Bailey and Richard standing at the railing atop the stairs, it really felt like the old Grey’s. A mini huddle is where all the big moments happened.

Just as the interns compete for their moment at a solo surgery, one lucky intern was already called in to help Winston with his diabetic patient. 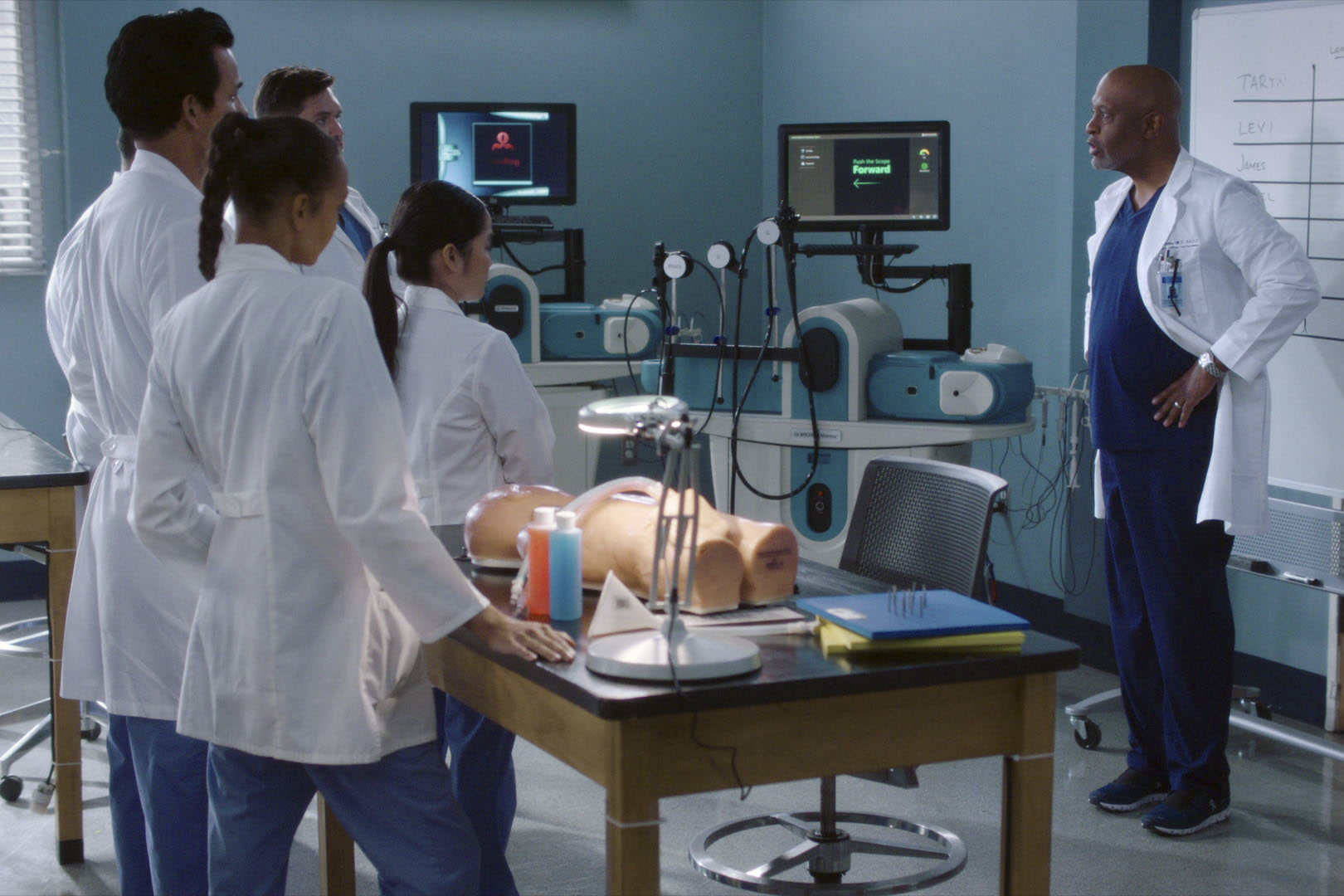 Richard and the interns on Grey’s Anatomy. Photo courtesy of ABC

Winston’s patient is a Black woman who needs a kidney transplant after her longstanding fight against diabetes. However, due to her labs, and numbers, and all that mumble jumble, she’s ineligible for the transplant list.

But, Winston does digging to find out that her numbers are within the range of many of the white patients on the transplant list. It’s just that the history of medicine is built on stereotypes of Black people and white norms.

He makes sure to fight against traditions and old ideals and gets her on the transplant list!

Finally, we have a patient to invest in. Someone who will return for the next few episodes! 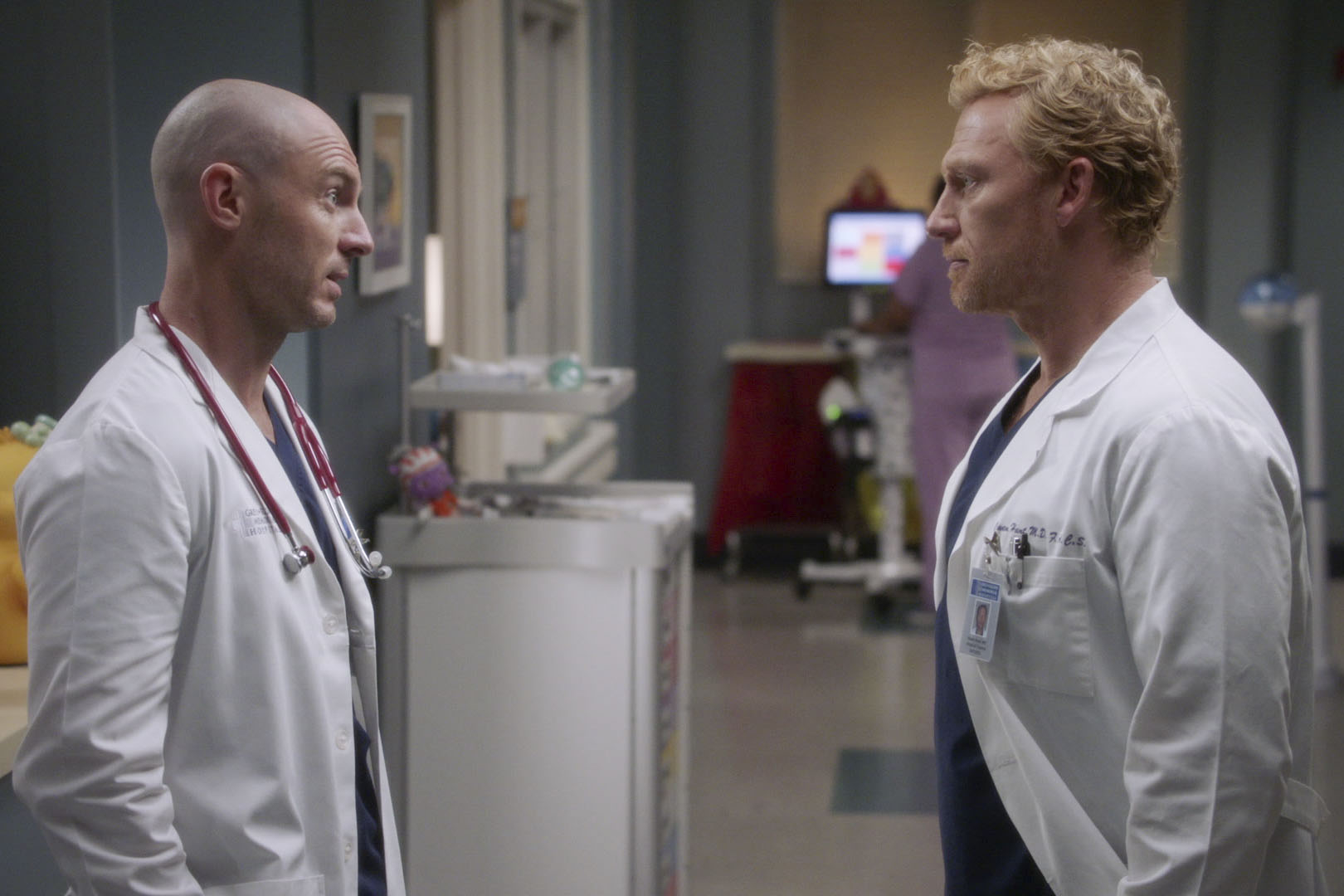 Hayes and Owen on Grey’s Anatomy. Photo courtesy of ABC

Now, the moment we’ve all been waiting for! Addison is making her appearance in the next episode, and I couldn’t be jumping higher for joy. If you’ve seen the preview, you know her first line is a reference back to her first words to Meredith “you must be the woman who’s been screwing my husband.” An iconic moment.

Grey’s Anatomy Review: With A Little Help from My Friends (18×04) 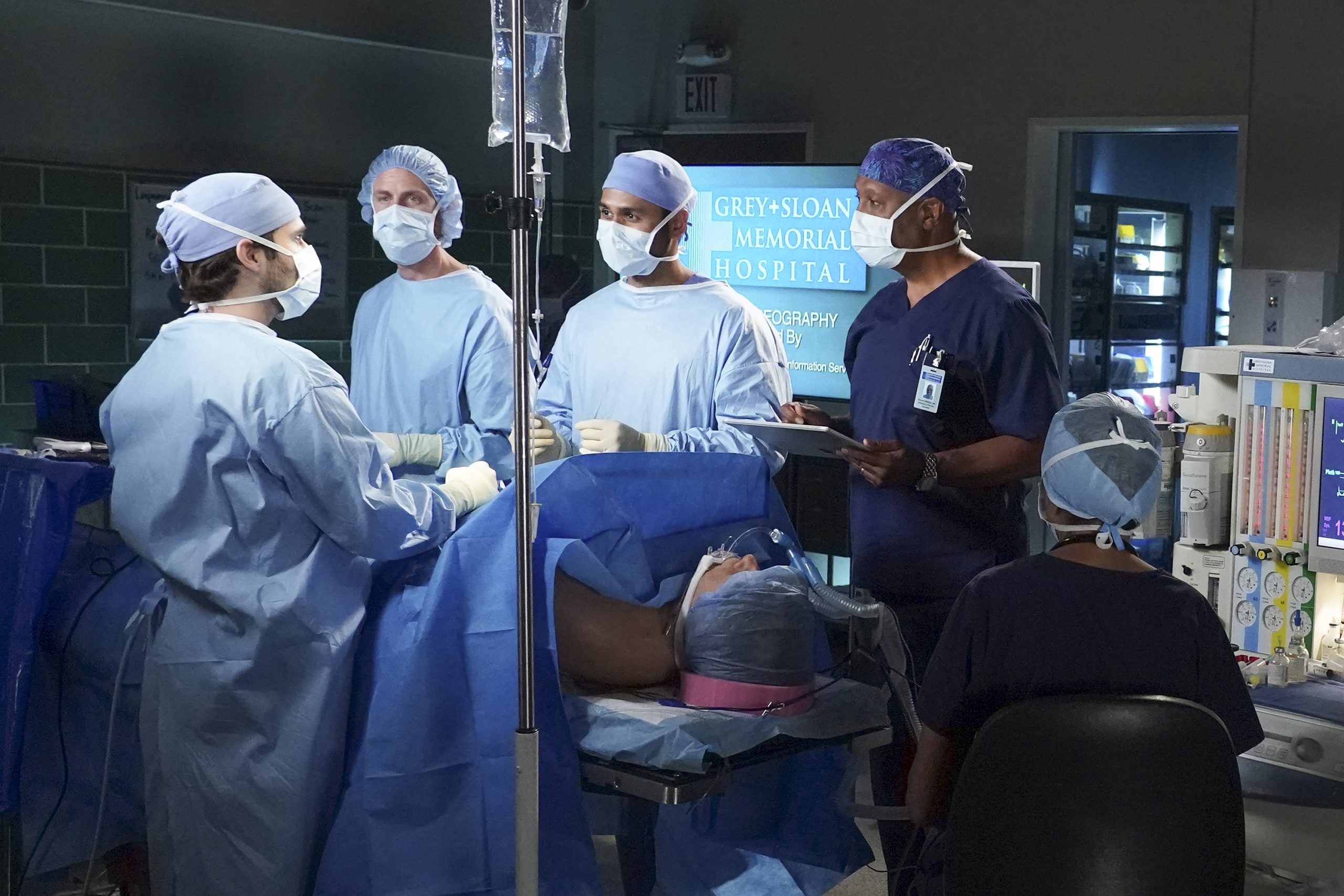 After watching Grey’s Anatomy Season 18 Episode 4,” With A Little Help from My Friends,” it’s clear what’s been missing all of these seasons. The friendship. Since Cristina’s departure so many years ago, there’s never been a duo that’s been able to fill that hole in the show.

Yes, Meredith has a strong relationship and friendship with Bailey and Weber, but it’s more of a mentorship and parental relationship rather than a deep friendship.

However, during these past two episodes we’ve seen the friendship between Amelia and Addison really thrive and blossom. If you’re a fan of Private Practice you already know they have an age-old friendship, so it’s nothing new. But, “With A Little Help from My Friends” sets aside perfect screentime for the two to share words of wisdom and tears together.

18 years later, following these surgeons for nearly two decades, it’s beautiful to see their personal problems evolve with age. No longer do their issues revolve around which man they need to choose this week, but it’s parenthood and depression resulting from the pandemic lockdown. 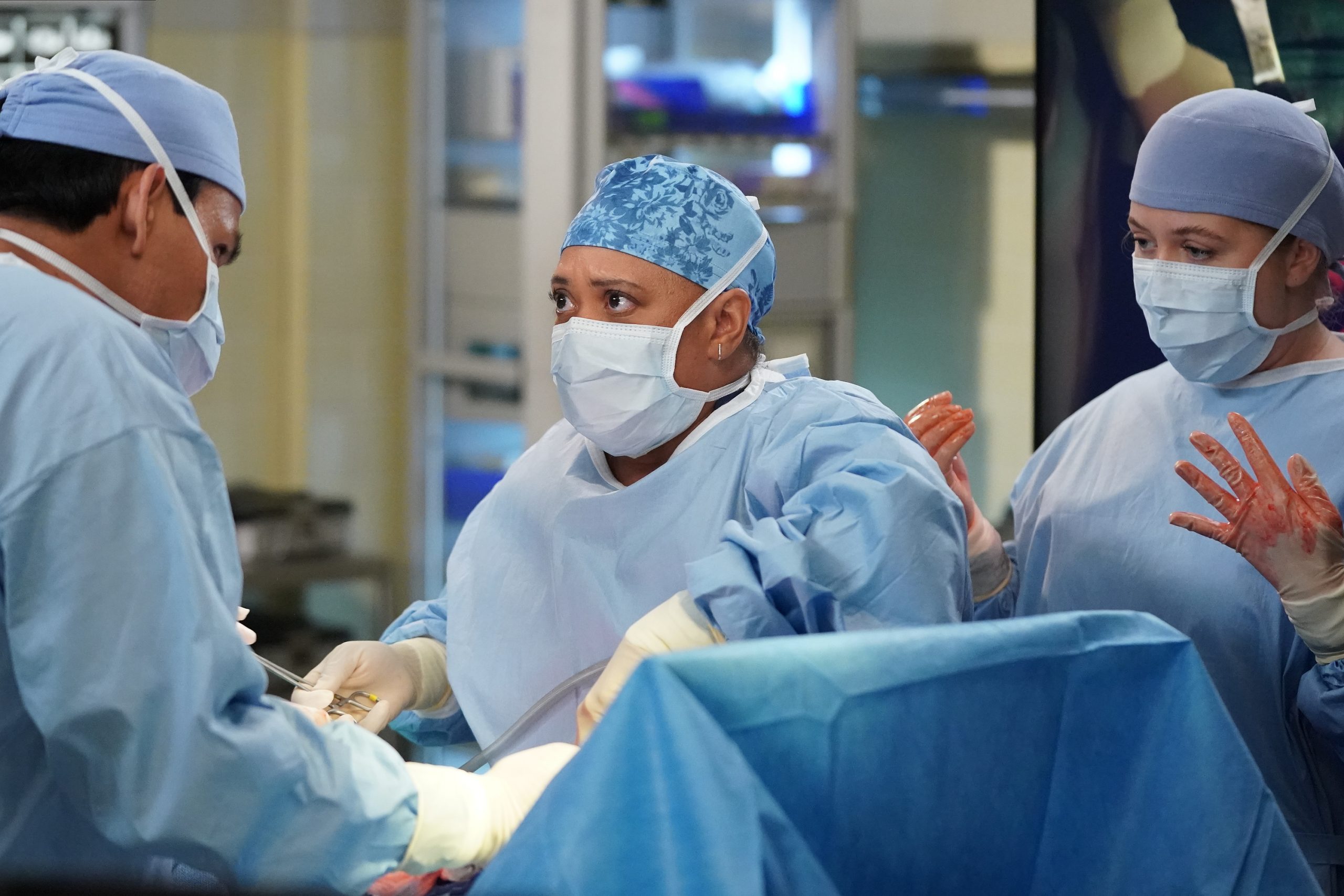 Bailey in the OR on Grey’s Anatomy. (ABC/Eric McCandless)

Choosing to tap into a real and relevant issue that many parents can relate to grounded this episode and brought back the show’s roots of humanity.

We hadn’t heard from Amelia her reasoning for not wanting to marry Link, but hearing her aversion to domesticity, is a legitimate reason and empowering to her character.

Meanwhile, Weber was working on speeding up the skills of the residents while also putting a band-aid over the healthcare worker shortage.

Meredith’s class went through so many more crises than this current class of residents, making them look like babies! Is it me, or does it feel like the current residents have been residents for also many seasons? 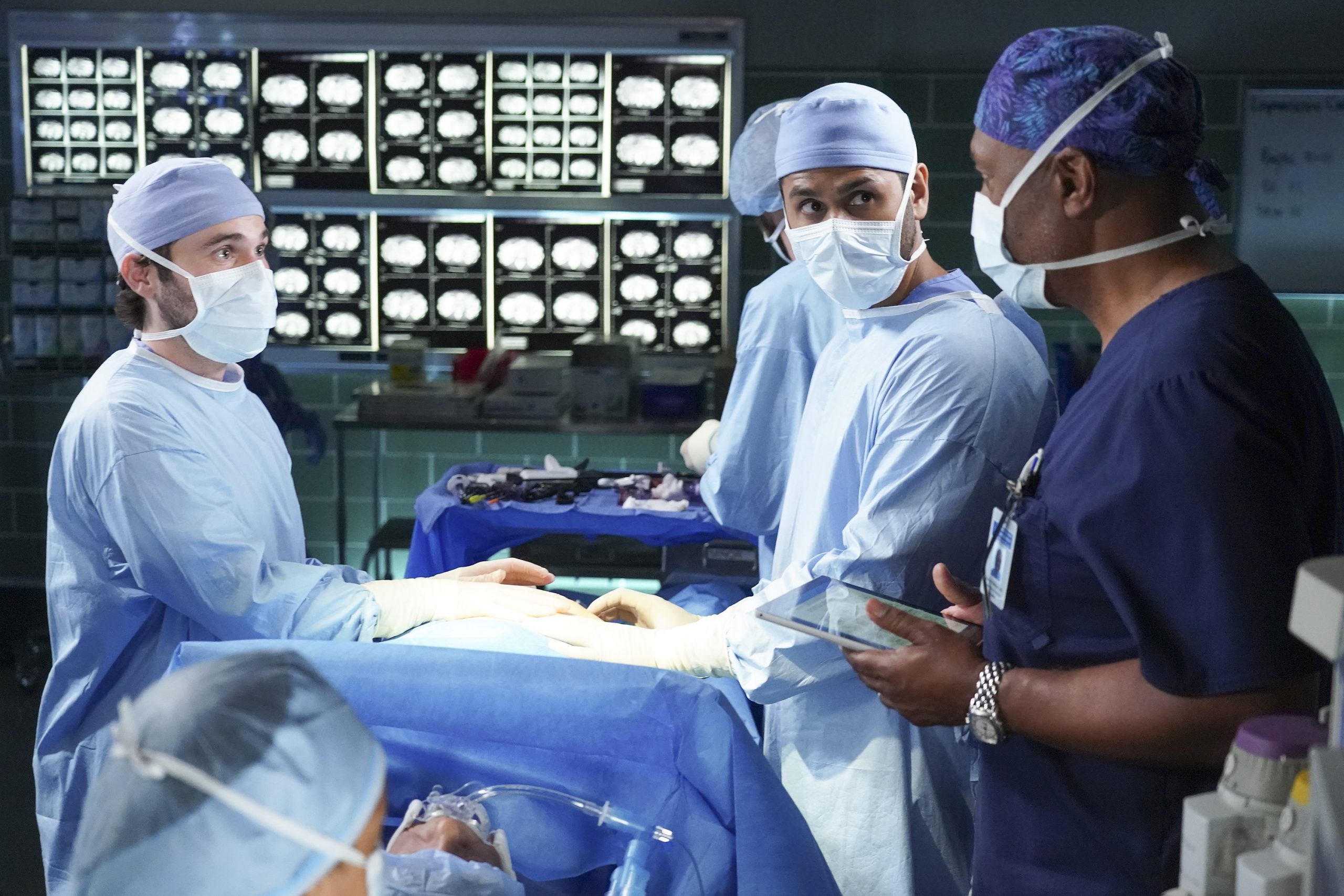 Weber and Schmidt in the OR on Grey’s Anatomy. (ABC/Eric McCandless)

Unfortunately, the storylines of patients waned and weren’t able to keep the episode very engaging. I would argue that the most compelling patient case remains Owen’s veterans. Even though his patient died, Owen’s fight will continue. It’s been a while since Owen fought for something he’s passionate about. He’s been a wallflower for much of the recent seasons.

With Meredith making her way back to Minnesota again, I look forward to the development between her and Nick, as well as Amelia’s budding romance with Kai.

What did you think of the episode? Please don’t forget to leave your comments down below! 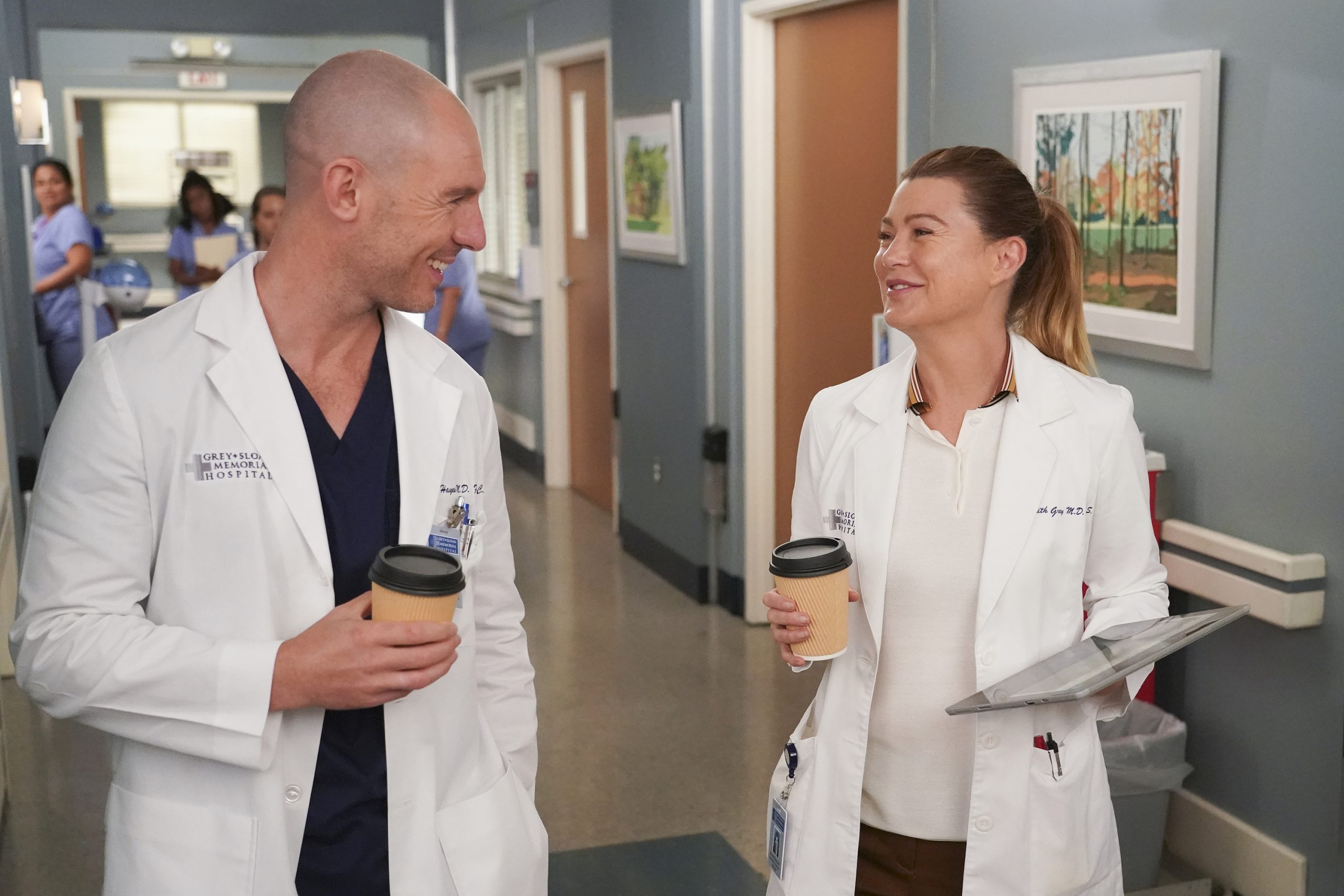 Addison’s back. That is it.

Grey’s Anatomy Season 18 Episode 3, “Hotter Than Hell,” was a successful tribute to the good ole days of this iconic show. Having Addie join the cast was an obvious tactic to bring viewership back up, and for me, it worked.

The not-so-subtle gossip shared between the residents to remind us of past characters, and past storylines was a fun bit of nostalgia and certainly meta!

This isn’t the only time residents have gossiped about past Grey’s Anatomy, but something felt different about it this time. We don’t realize how long this show’s been on television until it shows its age. 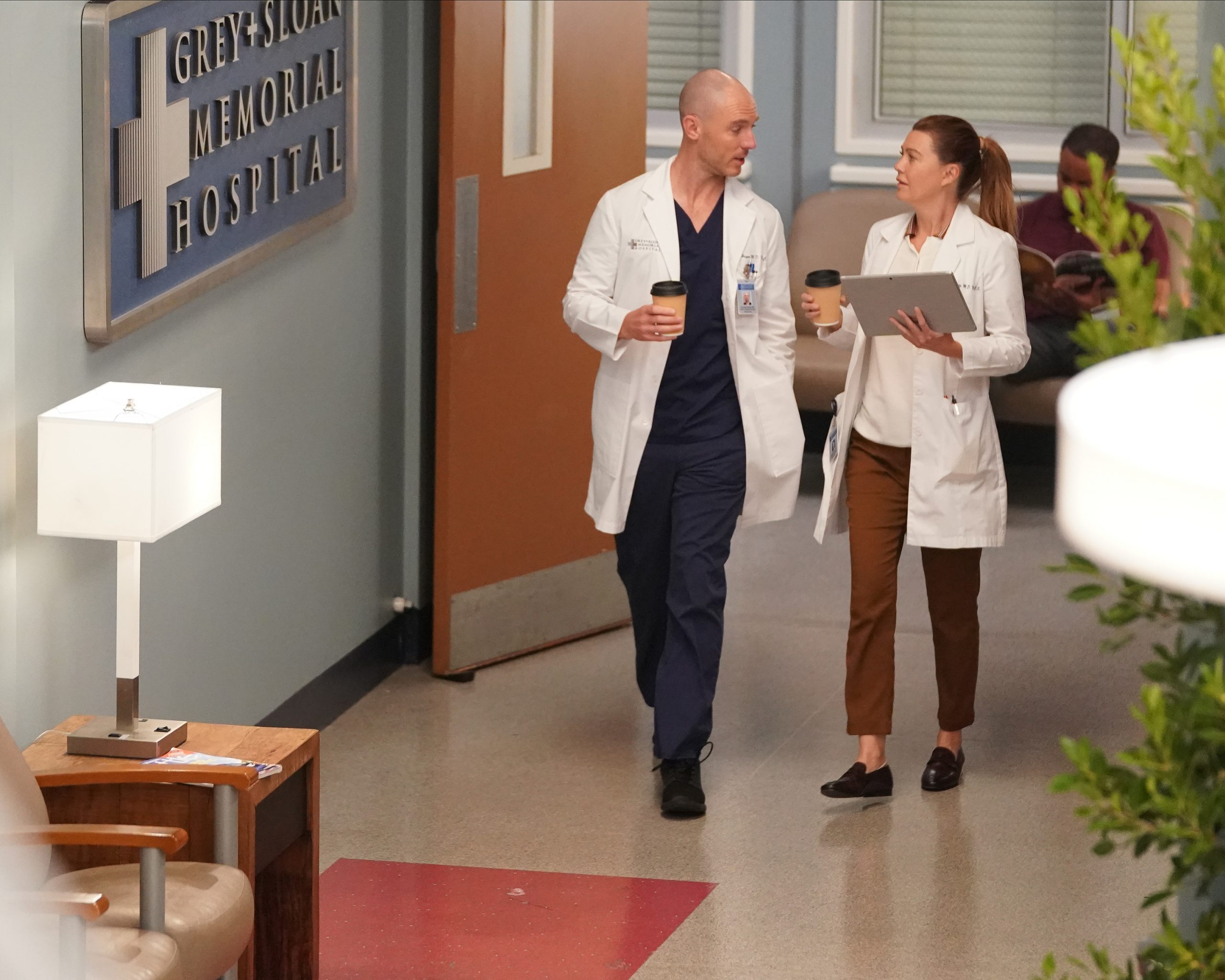 Speaking of the old Grey’s, it brought back another emergency situation. Albeit, a bit half-heartedly. While yes, Satan’s spawn was probably a high contributor to the heatwave in Seattle that shut down the HVAC system in the hospital, she at least helped a woman achieve her dreams of fertility in a groundbreaking procedure. So let’s just hand Addison the Harper-Avery award.

Many of the other patient cases this week were unfinished stories from “Some Kind of Tomorrow,” which the show seemed to shy away from in the last few seasons. But, with these episode-long cases, it offers time for us to invest in the cause and the character.

Or so it would seem. But there’s something so surface-level about many of the storytelling. We’re not sold on the stories. The relationship between the doctors and the patients is underdeveloped. Sure, Winston and his patient with the kidney transplant have the connection of fighting racial injustice, but it hasn’t had a big impact on the overalls storyline. I mean, they haven’t received much screentime! 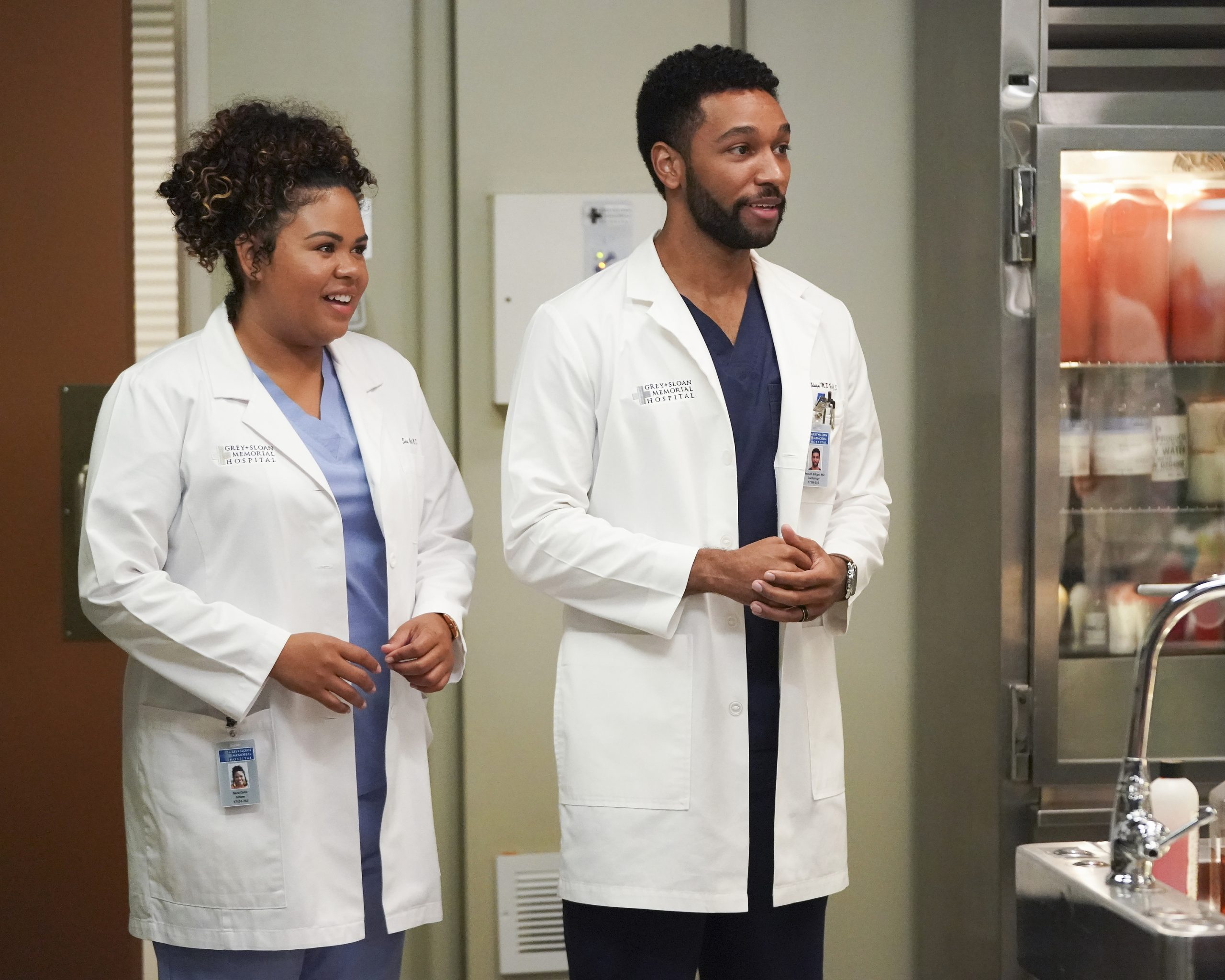 Winston and his resident on Grey’s Anatomy. (ABC/Eric McCandless)

Every character is splitting screentime, making it difficult for storylines to advance correctly. The cast seems bigger than ever right now!

At least Owen and Teddy are focused on their army history, and that’s a complete breath of fresh air. I have hope in this arc with the army veteran getting his new lungs.

Yes, time changes characters, and that’s one thing this show excels in: the evolution of characters for a nearly 20 year period. But many of the OG fans miss the storytelling of earlier seasons. And that’s been an overwhelming critique of the show in recent seasons.

This hour proved that there could be a decent mix of the old and new without seeming like it’s stuck in the past or the future. It places us in the Grey’s Anatomy we know and love. 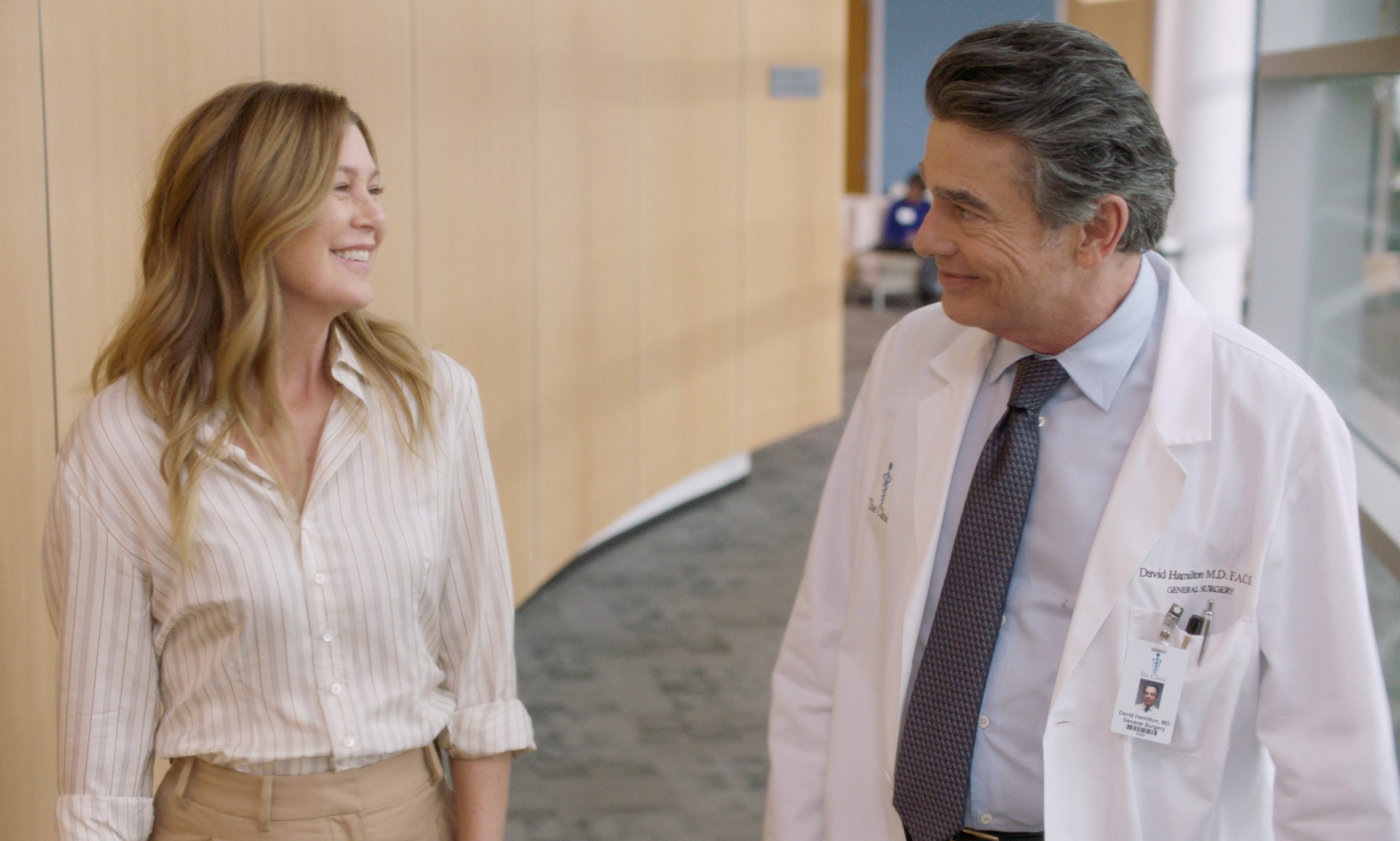 Usually, I would have been waiting in anticipation for the Grey’s Anatomy season premiere. However, 18 years later and a show that has sadly lost its momentum no longer holds a place in my heart as it once did. But, here I am waiting for something, anything to breathe life into it again. Yet, Grey’s Anatomy, “Here Comes the Sun,” the Season 18 premiere continued its path of mediocrity and left me pained and again missing what once was.

The season premiere reminded me of a patient going into V-fib. It was surrounded by doctors with paddles trying so hard to revive it, and every time they think there’s a pulse, it flatlines.

There were moments it felt like the original Grey’s was making a comeback. It even began with an ode to its very first episode, with Meredith entering the OR room referencing the “game” of surgical residency. Then it stopped, and we realize it’s a dream. And like all dreams that come to an end, so too did the episode’s potential.

Perhaps it was that there were too many storylines overwhelming the hour, leaving everything rushed. Patient cases used to be given more depth, allowing us to feel invested in the surgeries. Instead, every patient felt like an afterthought to remind us that oh yeah we are following the lives of doctors who work. 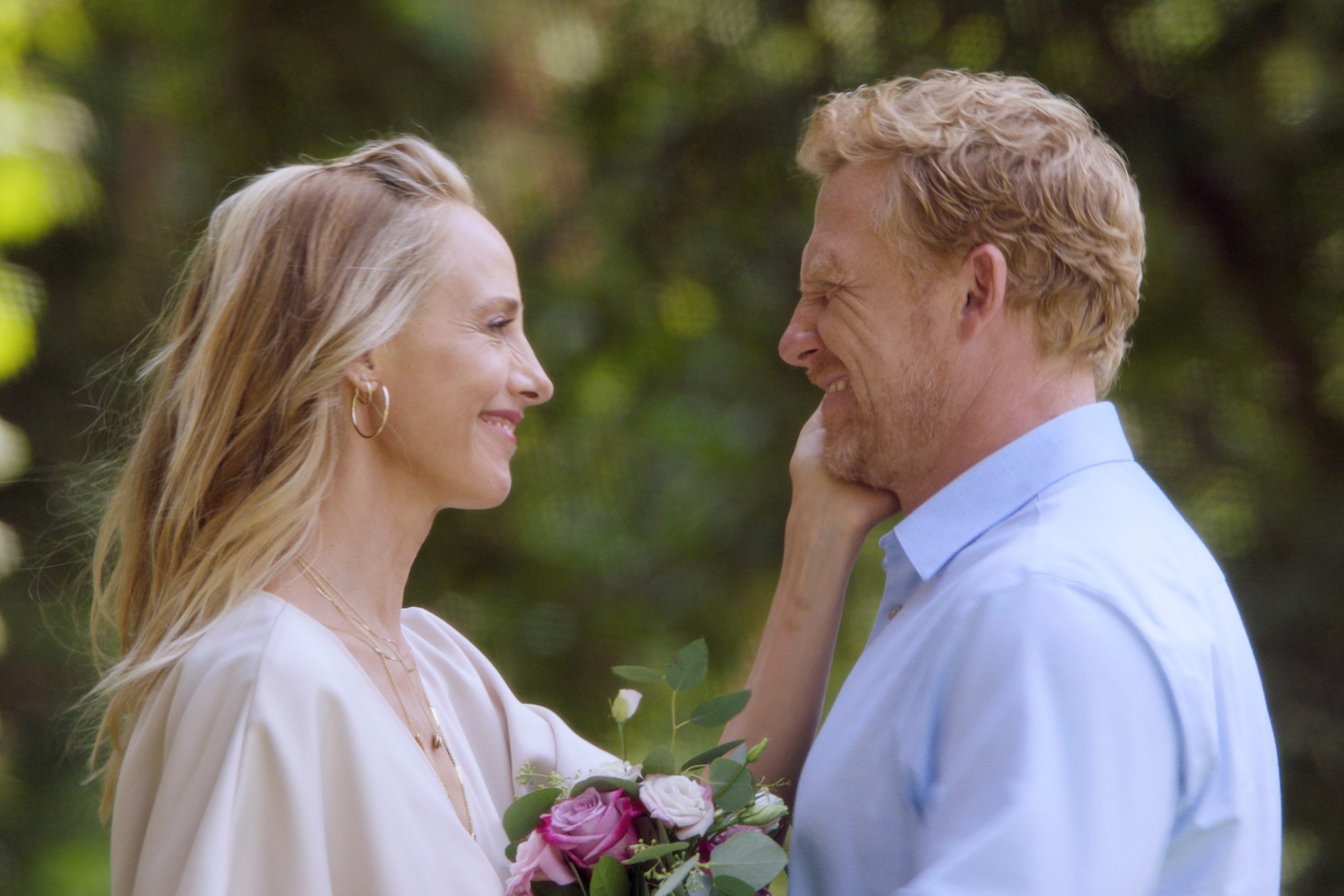 Doctors who work even on their wedding day. Finally, Owen and Teddy got married. I would’ve jumped ship if we had to sit through another season full of their on-and-off-again shenanigans. Their wedding in the park was interrupted by a medical emergency, in typical Grey’s Anatomy fashion.

And although there was a split second of momentary panic that this foreshadowed something bad, the episode ended in a happy makeshift wedding in Joe’s bar surrounded by all their loved ones.

While Owen and Teddy celebrated their joyous union, Amelia and Link might be ending theirs. I have no hard feelings toward Link. He’s probably the most upstanding guy on the show, and he deserves everything good. But, Amelia’s said no more than once to his proposals, and he needs to understand that no means no. And no doesn’t mean she doesn’t love him, it just means she doesn’t want a legally binding document to represent their love.

They better not try and match Link with Jo. Can’t they remain platonic best friends? That’s what the other needs right now. No more relationship drama! 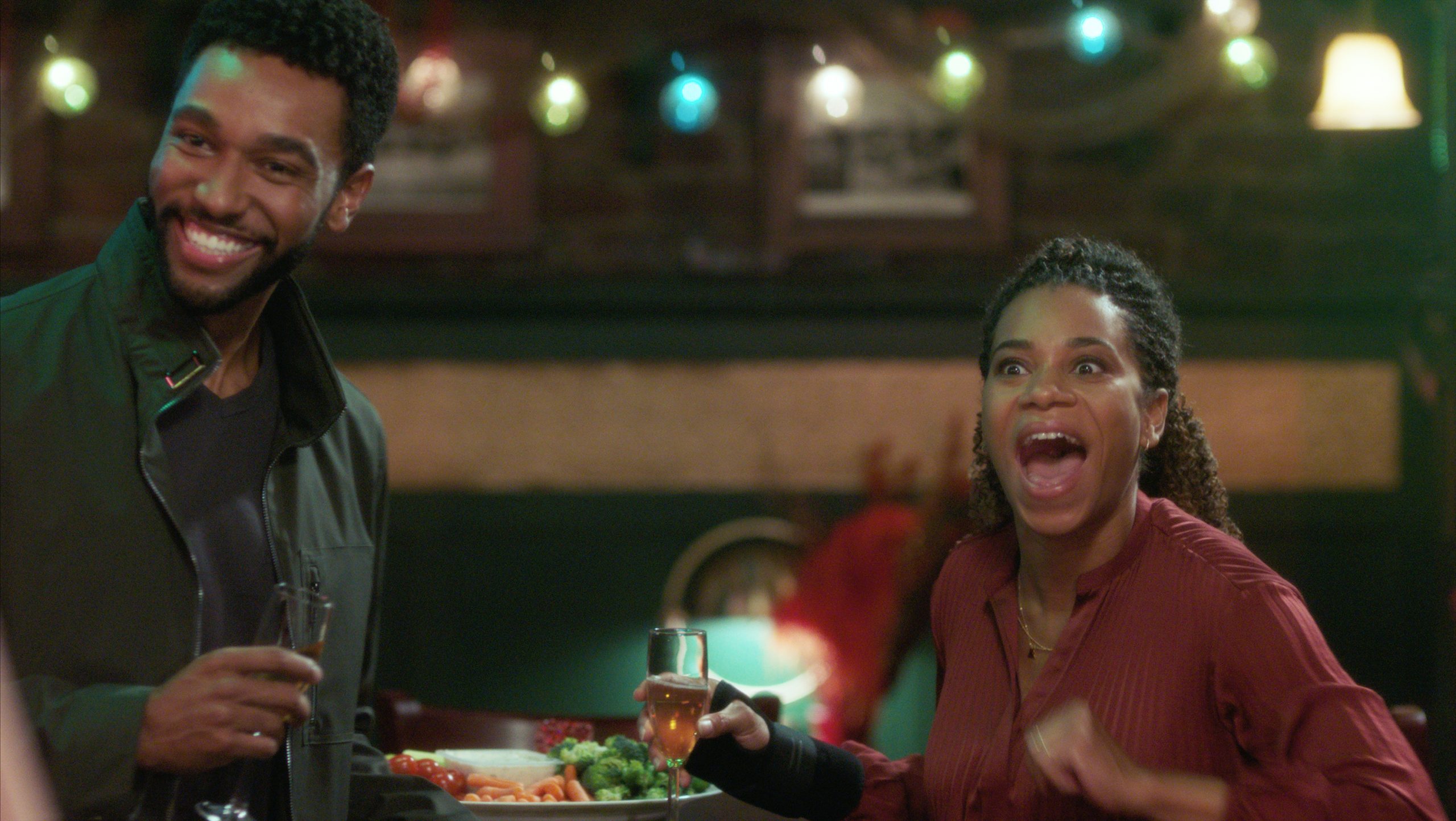 Speaking of relationship drama, Meredith’s in the middle of being wooed professionally by Minnesotan Dr. Hamilton (Peter Gallagher). There’s no way Meredith’s going to officially transfer to the midwest, but I do predict at least a quarter of the season to be split between the two locations.

I’m confused why they chose to do this, but we’ve gotten so used to Meredith not interacting with many of the current doctors, so it doesn’t feel out of touch.

During her dinner with Dr. Hamilton, she runs into an old flame, Dr. Nick, from Season 14. Their flirtatious vibe certainly remains, but with DeLuca’s recent death it seems too fast for her to jump into another romance so quickly, and she knows this.

If this season premiere is supposed to set the precedence for the entire season, we’re in for a long and bumpy ride. Here’s hoping they find a rhythm and can manage to keep things from falling into the same pattern for the umpteenth time.

Don’t forget to leave your comments down below! What’s your hope for Season 18? 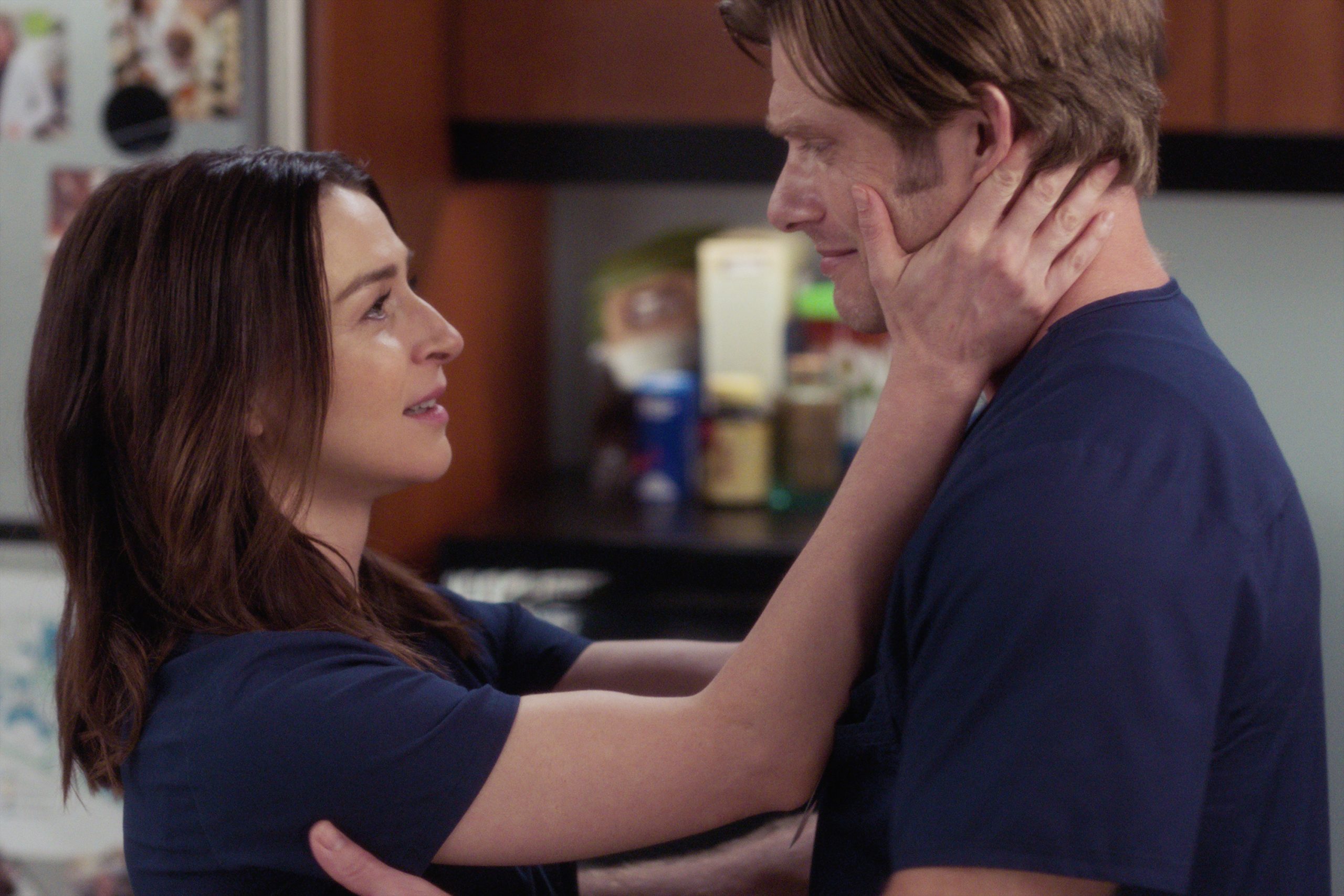