Comedic  legend Joan Rivers has died. She was 81-years-old.

She had been in the hospital for a week, after suffering cardiac and respiratory arrest during an outpatient surgery on her vocal chords last week.

Her daughter, Melissa Rivers, has been thinking of suing Yorkville Endoscopy Clinic, where her mother underwent surgery last Thursday. New York State Health Officials are now investigating. So far, the clinic has not made any comments regarding the investigation.

Funeral services for Rivers will be held on Sunday.

Melissa released a statement thanking the public for their constant support writing, “My mother’s greatest joy in life was to make people laugh. Although that is difficult to do right now, I know her final wish would be that we return to laughing soon.”

Many celebrities took to Twitter to react to the news, grieve and remember the comedic, smart-mouthed, genius.

Sarah Silverman wrote,  “My heart is torn in half. She wasn’t done.”

Lena Dunham from Girls wrote, “Watching Joan Rivers do standup at age 81 was incredible: Athletic, jaw-dropping, terrifying, essential. It never stopped. Neither will she.”

Anna Kendrick brought a little sense of humor, referencing the many jabs River’s took at her outfits on E! Fashion Police. “RIP Joan Rivers. Being publicly told that my dress is hideous will never feel quite as awesome. You will be truly missed,” she wrote. “It is almost impossible to describe how much I adored Joan and how much she has meant to me,” E! News host and FP co-host wrote. “She was not only the funniest woman I have ever met but was incredibly loving, honest, and lived her life with no regrets. Working with her for the last 13 years has been one of the true joys of my life. She could put a smile on your face, instantly, no matter how hard your day was. My heart goes out to Melissa and Cooper who have lost something that can never be replaced,” Giuliana continued. “Their bond was truly one-of-a-kind. They had the greatest mother and grandmother anyone could ever hope for. My life is so much fuller and happier because I got to share it with this beautiful person, a true genius. I woke up today unable to grasp what the world will be like without her and at the same time feel so privileged to have called her my friend.”

Giuliana has admitted that Joan was always there for her when she was struggling with infertility and than diagnosed with breast cancer.

It’s hard to believe that this icon is gone. The day before her procedure, she was doing stand-up comedy! And the week prior, she was reviewing MTV VMA and Emmy fashion with the FP gang, Kelly Osbourne, Giuliana and George Katsiopoulous.

I guess this is just a reminder that you never know what will happen in life and you should enjoy every minute of it. 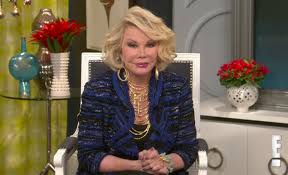