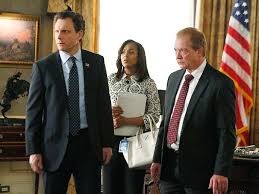 Olivia Pope may have everything handled, but she oversaw one thing– Kerry Washington’s pregnancy.

Scandal costume designers worked miracles to cover up Washington’s baby bump.. and they were, for the most part, successful. From purses, to tables, to men– all these props were used to conceal that growing baby bump. But aside from looking pregnant, shooting the season was one of her biggest challenges as it  took a toll on her emotionally as an actress. See, it’s not all glitz and glamour! The 37-year-old opened up to The Hollywood Reporter about her struggles with filming season 3, which is rare because she usually likes to keep everything very private.

‘All of last season was a challenge for me, on a few levels. For one thing, I was going through this amazing physical transition, this physical journey of having a baby, that my character was not going through. And I work very physically. What I do is often grounded in the body, she said.

With everything going on, Washington admits season 3 was a emotional roller coaster for her. (Us too, but for very different reasons!)

“At the same time, everything I understood about Olivia unraveled because of the shorelines. The season really broke me. I’m a Type A actor who likes to have it all figured out going in, but suddenly I had no idea where this woman was going to go next. I had to jump in without everything being perfect,” she admitted.

She also added that she lost control over her character last season which meant her “acting toolbox had to be upgraded. I had to trade in my screwdriver and hammer for a Black and Decker power tool.”

Don’t worry, we think you stayed true to Liv throughout the whole time… especially when she realized she was the scandal. Brilliant!

Washington welcomed her daughter Isabelle with husband Nnamdi Asomugha in April. Much of Kerry’s strength came from the cast and creator Shonda Rhimes, who even threw the star a baby shower.