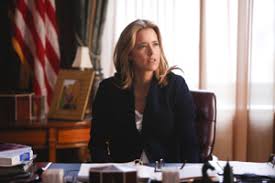 I can’t say I’m completely on board with this new CBS show Madam Secretary mainly because, I’m getting kind of annoyed of shows focusing on the same premise over and over again. While I wasn’t bored, I wasn’t completely entertained. I didn’t crave more, which is really what justifies a good TV Show for me. Shows based on strong women in a political office are becoming the norm, and while I like the character revolution, I’m just kind of over it. One Olivia Pope is enough. There are of course differences. For one, she’s actually holding a seat in office and she’s not sleeping with the President. It’s a start! Elizabeth is an ex-CIA agent-turned-college professor. When the show starts off, we see her really content living at home, with her religion teacher husband, and her horses. That is until she gets wind that the Secretary of State died in a plane accident on his way to Venezuela. She thinks nothing of it, until the President, not of the PTA but of the USA, shows up at her door hoping to recruit her for the position. There’s no one he trusts more and well, he’s not really taking no for an answer.

So just like that, Elizabeth becomes Madam Secretary. We pick up two months later, after her whole life was uprooted and the family moves to Georgetown. Her kids aren’t exactly happy to be, but since when does it really matter what the kids want? Her first day on the job isn’t exactly peachy. She’s got big shoes to fill, and a staff that isn’t exactly on her team. Aside from Blake, whom she hired, so he has no choice but to like her.

The first matter of business? Two stupid teenage boys have been captured in Syria for trying to overthrow the government. It’s up to Madam Secretary and the President’s aid, to get them out of there safely, without causing a media frenzy and interrupting the peace talks happening the same weekend. Elizabeth recommends using one of her “people” to do the job, but the President states it’s better to just go with the company. She does everything in her power to keep the parents underground–meaning not speaking to the press or to their children via social media. Unfortunately, things get messy real fast. The company fails to save the children. Syrian rebels send out a video of the “terrorist” victims. She asks the President one more time to do things her way, but to no avail. That’s when a talk in bed with her husband makes her realize that she’s here because she’s suppose to help change the world. Make change. How can she do that if she can’t even talk to the President without his aid? So, she does what any strong female character would do. She goes behind everyones back, hires her own men to do the job– former Chechnyan colleagues, negotiates a deal, and contacts the President’s wife in order to let him know, this is how it should be done. Otherwise, those boys would get killed, a video would surface of their execution, and the talks about the Middle East peace would be pretty pointless and overshadowed. She’s showing her will and ability to get stuff done.

Elizabeth has the kind of power we see in Hilary Clinton. But is pride, power and a strong will a little too much? I’d say so. While Elizabeth is believable in her role, she seems almost invincible. There is no weakness, and no one is ever that good at their job. Over time, I think that needs to be incorporated. Bad bitches get stuff done, but they also get burned, exhausted and become the core of the problem.

The boys arrive home safely, kissing American soil. It’s a scene that hits a little too close to home in times of ISIS beheadings of Americans. Constitutional freedom is not global freedom. Lesson learned. And while you think saving two boys from jihadist, Syrian rebels, should be an act that’s praised… it doesn’t go over well with aid Russell Jackson, whose upset that Elizabeth went over his judgement. That’s one way to create an enemy. He tries a scare tactic and says that it’s better to be friends with him, than enemies, but Elizabeth holds her ground. Same could be said for a powerful woman in office who is clearly never limited to thinking inside a box.

Despite questioning why a world-peace dinner with a polygamist, King of Swaziland, with 23 wives was necessary, Madam Secretary took it in stride and used the moment to address aids issues in his country, while reciting all of the wives’ names. It shows how a woman’s approach to politics is sometimes more personal. Masculine with a feminine touch can go a long way. Her team advised her not to bring the subject up, but this is another moment used to show that Elizabeth does things her own way. And they work. The King is overjoyed and everyone impressed. Elizabeth won over most of her new team, including Nadine– her chief of staff.

Things ended on a sour note when she found walks into her office to find her husband with a stern look on his face. He informs her that her friend George has died. He was just at her house just a few days ago delivering the news that the previous Secretary of State didn’t die accidentally. He was murdered. George was convinced by evidence of a bank account in Caracas. I’m sure we’ll delve more into this issue, but obviously, George knew too much and someone wanted him silenced. “This wasn’t an accident,” Elizabeth states between tears. “No,” her husband replies. But who killed him? Why? Was it the same person who killed Vincent March? Does the President know anything about this? And furthermore, is Elizabeth’s position and safety at risk? Definitely a solid pilot, but I need more to keep me wanting to return every week. Like I said before, the fact that the White House is corrupt, that terrorism, extortion and cover ups exist, that a strong female can lead a pack of men based on women’s intuition, and that she can fool the media by getting a makeover, isn’t anything I haven’t seen before. And as a fan of Olivia Pope and Mellie Grant, Elizabeth has a lot to live up to. I think she can handle it, as the casting of Tea Leoni, is pretty on point. I just need a fresh spin on a cliche story.

What are your thoughts? Did you enjoy the Madam Secretary pilot? Let us know @CraveYouTV