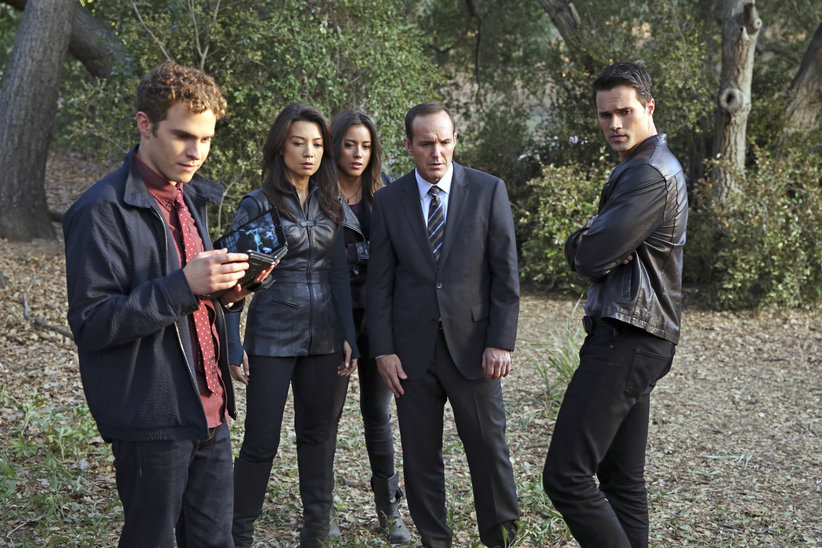 We begin in Wrigley, Pennsylvania when a group of boy scouts are camping. The camp counselor leaves the camp to investigate a sound made at the grounds. Seconds later the metal objects around the camp begin to levitate. When the objects fell the councilor screams and electric pulses start frying everything in the area. When the campers find the councilor he was levitating and was found dead. 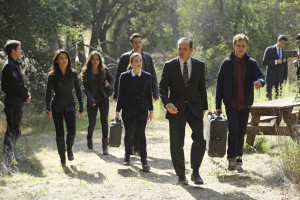 We head to The Bus where we find Agent Phil Coulson doing a physical for Agent Jemma Simmons. Best line you hear from Coulson, “I don’t sweat, I glisten.” Does that mean he’s a vampire? Never mind, anyway while that goes on Agent Grant Ward and Agent Leo Fitz work on the Night-Night Gun to make sure it’s lighter and combat ready. Ward doesn’t approve and thinks it’s a little heavy. Much to the dismay of Agent Fitz he gives us his best Ward imitation, which almost sounds like the Godfather. No offence Fitz, don’t quit your day job. Now a quick recap you may remember a few weeks ago when Skye was punished for her actions in China after siding with the Rising Tide. Now that she is on a tight leash with Agent Ward she feels bad for everything she has put the team through. Of course Fitz and Simmons have forgiven her. Simmons also lends her hand on a Grand Ward imitation…safe to say it’s hot when a British girl does an American accent. When the team gets a call to head to Pennsylvania they find the body still floating. The victim’s name is Adam Cross, when the team finds his body he was still floating Simmons comes closer to the body a static shock passes on to her and the body falls. AHHHHHHH FREAKY!!!!! 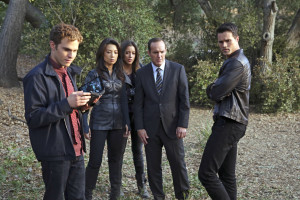 Back at the Bus, Skye finds out that Cross is a volunteer firefighter among other things. But Ward and Coulson ask her to dig deeper and find more on him. When she goes Coulson notices that Ward is being too hard on her. He’s still hurt by what Skye did in the last episode. Give her a chance Ward, geez. Meanwhile, Simmons analyzes of the body for more info and finds that the Cross was emitting 400 mega Jules which is more than your standard lightning bolt. Soon after, Fitz gets another reading similar to the one on Cross. It leads them to a farm house owned by Frank Waylin, another firefighter but there’s an even deeper connection. They both were first responders after the Battle of New York (Avengers). 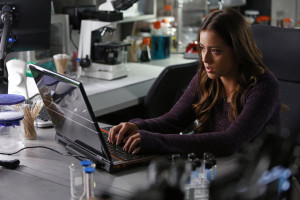 Coulson, Ward and Agent Melinda May head to the firehouse where Cross and Waylin worked at. When they get there they meet Tony Diaz who from the get go doesn’t look so good. That’s because he was having the same effects as his friends Waylin and Cross. We find out an even bigger revelation, that all three of them got exposed by a Chitauri helmet they picked up from New York. Reason how they got it was because they were cleaning it, big bad move. He ends up having the same reaction, Coulson couldn’t stop it Diaz tells him to leave before he gets zapped and dies. The next morning Fitz makes sure they weren’t exposed and they are clean, the Chitauri helmet is in storage and their mission is to send it to a research facility on the other side of the Atlantic.  En Route, Simmons finds out that the firefighters were passing the virus from person to person leading to a shocking point in the story because the virus has now spread to Simmons. So Coulson locks her up in the lab as a precaution. 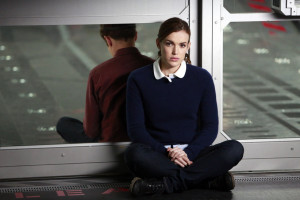 With Simmons now locked in the lab, Coulson believes that she has a few more hours before she gets shocked. So she gets to work on finding a cure but doesn’t have any luck on finding results. Until a solution used from the Chitauri helmet was able to produce a sample that could possibly work. So Fitz goes to the interrogation room where the helmet was put in storage and Simmons makes quick work of creating the antiserum.  It seemed to have worked on the specimen…but it ended up failing. With only moments till Simmons is zapped she gets a moment alone with Fitz…only causing her to do the unthinkable, knocking him unconscious.  When he wakes up he notices that the specimen was alive and cured, but that didn’t stop Simmons from opening the back door and jumping out of the plane. 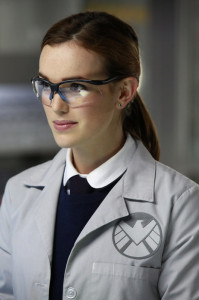 When Ward gets word that the door was opened he grabs the parachute and the antiserum and takes the leap to save Simmons. Safe to say he was successful and she was cured. Of course in true Coulson fashion he gets pissed, reason being he was in talks with Morocco to clear the mess made in getting them out of the water. Talk about diplomatic protocol.

The episode ends with Agent Blake (Special Guest Star: Titus Welliver) retrieving the Chitauri helmet and noticing that Coulson is a changed man and that it’s a change for the better. As he gets off the plane…he touches Lola. DIDN’T HE GET THE FREAKING MEMO ABOUT LOLA? SOMEONE TACKLE THIS GUY!!!

This episode is one I guess everyone wanted because they wanted a twist that could have potentially changed the show. Well people you got your wish but that doesn’t give you the right to go on hating the show. Plus we see a struggling Coulson and we reveal that ever since getting stabbed by Loki in The Avengers, he hasn’t been the same especially with the war wound he got. But Agent May seems to be the one to convince him that he was able to survive and that its what makes us different. Finally for those who wondered if Agent Blake sounded familiar, that’s because he was featured in a Marvel One Shot from last year. If you have The Avengers Blu-Ray be sure to watch Item 47 and you’ll see him. Don’t have a copy grab yourself one for the holidays. Also, be sure to watch Thor: The Dark World in theaters this weekend just before a crossover in two weeks. In the mean time here’s a sneak peak of next week’s episode. Sorry we got the CTV commercial.

Joachim’s Movie of the Week: Thor The Dark World