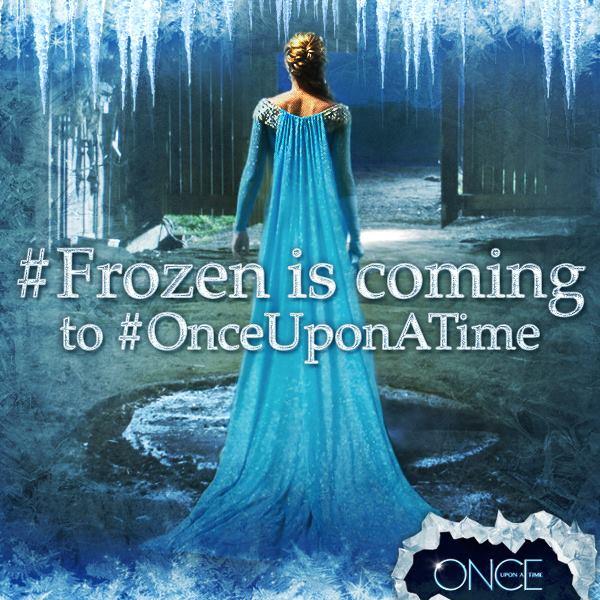 OUAT- Frozen is Coming! Who Should Play Elsa?

Frozen’s Princess Elsa is coming to Once Upon A Time in season 4 and fans have a lot of questions before the show premieres in the fall. Will she be the new icy villain coming to Stroybrooke for vengeance? Not exactly.  The executive producers made it clear that they want to honor the character that everyone has fallen in love with. She’s not evil, just misunderstood. Wait, isn’t every villain just ‘misunderstood’? That’s what makes them evil right? Like Zelena wouldn’t have been trying to enact the travel-back-in-time curse if her mother never gave her up and Rumpel didn’t choose her step-sister!

So why is Elsa coming to Storybrooke? What is her agenda? We know she escaped from Rumpels closet of magical object/magic he didn’t understand so what is her magic exactly? Can she make hell freeze over on earth? What was her relationship with Rumpel? And last, but definitely not least, who is going to play the new princess?

While the actress hasn’t been cast ye (the executive producers are taking a little well-deserved hiatus) we have in mind some ladies we’d love to join the small screen. Jennifer Morrison (who plays Emma Swan) admitted to MTV News  that she would love Idina Menzel or Kristen Bell, who voiced Princess Anna and Elsa for the movie, to play the part of the icy royal.  With their busy schedules, we’re not sure if that’s entirely feasible.

Personally, I’m not a fan of Kristen Bell so I don’t really want her to be a princess of any sort on OUAT and Idina Menzel doesn’t really fit the part for me either.

Here’s some ladies that we think could definitely pull off the icy look.

Who do you think should play Elsa? Who would like to see play her? Sound off in the comments below! Now, onto the spoilers! While co-creator Eddy Kitsis admitted that everyone is taking a break from writing the next season, here’s some things we can look forward to.

Not much has developed on this front except that its obvious these two have a history. “It seems like they’ve crossed paths,” Kitsis said. And you know crossing paths will Rumpel always has consequences. In this case, getting locked up in a chamber for years to come.

“We would be very disappointed if Elsa was the only one from that world that you saw. Who else may appear, we’re not ready to tell you just yet,” Horowitz admitted.

On the season 3 finale, Emma came back from the past and brought back Marian. Marian is Robin Hood’s wife, whom he thought died many years ago. Truthfully, she probably did, but when Emma went back in time she saved from Regina’s prison and brought her back to the present not knowing who she was. While Regina finally got her happy ending with Robin Hood, it was quickly taken from her when he was reunited with his wife. Now the question is, how does this affect Regina? Will she become evil again? Will she be intent on destroying Emma? It’s really unfortunate because these two have really bonded over Henry.

“Regina’s greatest villain is her own weakness. We want to see how she handles this setback. Does she revert to her old ways? Does she continue on a new path? And also, how does Emma react? Does Emma feel the guilt like her mom did when she found out about Daniel? All that messiness is what we want to get into. We think it’s more complicated than her returning to her vault and killing Emma — unless, of course, she returns to her vault and kills Emma,” Horowitz explained. As for Robin Hood

Kitsis and Horowitz explained that we will see him struggle with his feelings for both Regina and Marion, his wife. When we left off the two had a blossoming relationship. Regina finally let her wall down and let love in. That’s something she was terrified of doing. She embraced Robin’s child as her own and it seemed like things were finally going to turn around for the once evil queen. But now, Robin Hood has his wife back and he has to make a choice. Does he go back to the woman he once loved, whose kid he’s been raising, or does he stick with the woman he recently fell in love with. The one Tinkerbell told him was his one true love? Gosh, I hope its the latter.

Well their an item now. Emma finally embraced her feelings for Hook and let love in. It was perfect. But on this show, nothing stays perfect for too long.

“What we saw in the finale was the beginning of something, which could go in many different ways and many different avenues down which they could go. It’s not like they’re going to suddenly go to order Chinese and watch Netflix. There’s going to be some challenges ahead and we’re going to have to show you some surprises about where the two of them go,” said Horowitz. Baby Neal and the Charming’s

We can’t forget that the Charming’s now have a brand new bundle of joy. Literally, it all just seemed to good to be true. How will they deal raising a newborn?

“It will be interesting for them to have a newborn because we’ve never seen them have that experience. They had to put Emma in a wardrobe and she came back to them 28 years later. Don’t forget — they both share one heart. We still have to dive into what that means,” Kitsis explained.

Photo Credit: ABC/ Once Upon A Time