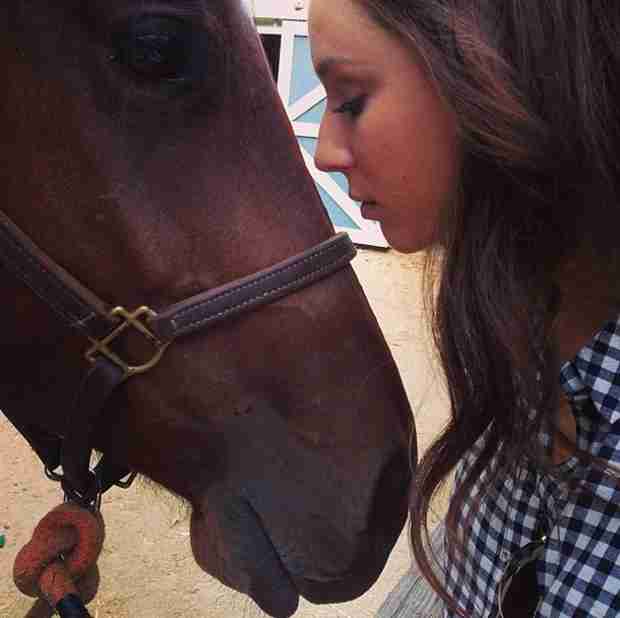 Pretty Little Liars premieres in just 1 day and this season is said to be the craziest yet. But amdist all the insanity, Spencer Hastings (played by Troian Bellisario) still manages to find peace. She’s taking her obsession with horses & all things equestrian to a new level— she’s buying a horse!

Shay Mitchell recently instagrammed a photo of Troian with her new bundle of joy. “Today I am a very happy girl… Spencer finally gets her horse,” Troian wrote on her regram. Hopefully, her happiness lasts a little longer than one episode… although with A on the loose, that horse might be in some danger pretty soon! With Ali back in town, the girls need a way to cope and blow off some steam. Yesterday we reported that Hannah will be going a little dark and turning to alcohol. Maybe Spencer finds a release in horseback riding? One could only hope! This new way to cope is much better than her previous addiction to “adderall”.

Yesterday we celebrated PLL’s 4th birthday. Can you believe it’s already been that long? I remember walking around the mall seeing posters of this new ABC Family show like it was yesterday. I didn’t even think much of it! And now… look at the hubbub surrounding it!

So what’s Troian’s memory of the pilot episode? “Being freezing,” she told Clevver News.

We shot in Vancouver in December and we were shooting for summer… And I remember so, so vividly I had two bikini scenes. Of course. And Sasha and I were in bikinis and it started to snow. And the network called and said, ‘They look dead. Paint them pink.’ And so I remember being so cold and trying to do a scene where I was like, ‘It’s hot. It’s warm. It’s so fun.’ And I’m like yelling at her. It’s the scene where, if you look at the pilot, we go and we have a fight outside where Hanna’s inside, she like eats a cookie. And literally they yelled cut because they were like, ‘We can see the snow. You guys are going to have to frame out the snow.’”

Ah… movie magic! If you don’t remember which scene Troian is talking about, let us refresh your memory!!!

As for Spoby, they might have been on the rocks when we left off season 4 but all the rumors seem to indicate that he will play a huge role in Spencer’s life… once he returns from London. Why did he go to London? Was he looking for Wren? Whatever the reason, he’s in for a surprise when he returns home and finds the girls in a pickle with Ali. Literally, you leave your girlfriend for one weekend!

Troian believes that no matter what the obstacle, Spoby is strong enough to overcome it.

“Spencer and Toby, they’re always [makes an up and down motion with her hands]. They’re very passionate people. They’re also very bizarre people. I think that’s why they fit together, so they’re always gonna kind of be like right on the same line with one another and be side by side, and then he’s gonna leave town and she’s gonna get mad. And then they’re gonna criss-cross again. That’s what always happens.”

What do you think? Will Spoby get back together? Will A use Spencers horse to have a little dangerous fun with her in the stables? What other behind-the-scenes filming secrets would you want to know about. Sound-off below!

Frozens Anna & Kristoff Coming To Once Upon A Time