We’re just 2 days away from the premiere of PLL season 5 and today’s spotlight is on Ashley Benson, who plays Hannah Marin!

Fans are dying to know what will happen on the Haleb front now that Caleb is returning from Ravenswood. 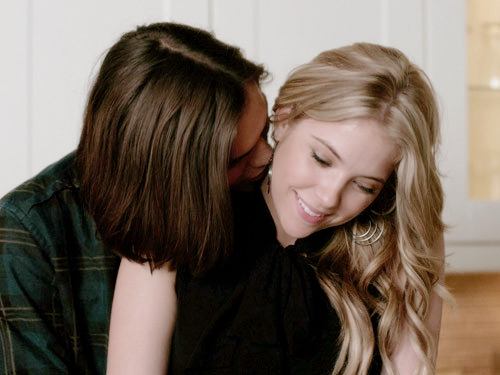 E! Online caught up with Ashley Benson, who admitted that things are going to be pretty rocky for the couple!

“I think in the beginning it’s going to be a little bit difficult,” Benson explained. “Caleb now knows that Travis is her boyfriend, and for Hanna, she finally moved on and accepted that she can be with somebody else.”

But relationship or not, that doesn’t mean we won’t have some really great Haleb moments to look forward to in season 5. Benson teased that the exes will share a very “fun” story line together. Actor Tyler Blackburn reveals that it will be very much like “Batman and Robin.”

Hmm… does that mean Caleb will come back to town, realize Ali is alive and jump right into trying to help his ex find out who A is? Will he even deal with what happened while he was in Ravenswood. Will Miranda’s death be brought up at all? And what about his feelings for the ghost? I feel like everything needs to be put out in the open before fans can accept the idea of these two getting back together as a couple. But I don’t mind some fun for the duo. They’ve had such a tough year, maybe crime solving like superhero’s will be a good change of pace!

Either way, the cards are in your favor Haleb shippers as Benson also wants Caleb and Hannah to get back together already!

As for Hannah’s character, she’s going to take a dark turn now that Alison is back in town.

“This year she’s going to go through kind of a dark phase. She kind of loses who she is and doesn’t really know who she is. She tried to be like Alison and now that Alison’s back she doesn’t want to be like that anymore. She feels like she’s been putting on a front for the past few years,” Benson explained to Ok! Magazine, adding that her character will turn to drinking as an alternative.

“I love [playing the edgier Hanna] because I want to be in jeans, a t-shirt, and boots, and flats, and shoes rather than heels running around in the jungle about to break my ankle,” she said. Although it might be a little hard for viewers to get used to this new girl without her pumps and her floral prints.

Keeping Up With Ashley Benson

The starlet is gearing up for the premiere of season 5 by doing lots of press. She caught up with HLN recently and played their deal breakers game. Some of her dating deal breakers are guys who don’t put down the seat, screen her calls, don’t get along with her friends, forget her birthday, or lack a sense of humor.

She doesn’t mind guys who don’t watch PLL, don’t follow her on Twitter, look better than her, or have a lot of girlfriends.

She was also spotted roaming the streets of L.A with on-again-off-again boyfriend Ryan Good. Unfortunately, she was too engrossed in her phone to give him any sort of attention, which he didn’t seem to mind. Business is business and we’re sure the ex-Justin Bieber stylist understands!

Frozens Anna & Kristoff Coming To Once Upon A Time