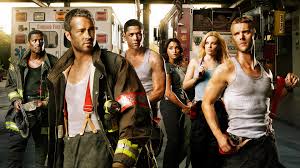 Seems like viewers are definitely on the Forever train. The pilot episode drew in 1.7 rating Monday night, and bumped up to a 1.8 after the second episode attracting 6.5 million viewers. It’s a rare-rise for the second episode of a series, but definitely welcome. The show is great, so if you haven’t seen it, please watch! The drama climbed in second place to NBC’s Chicago Fire, which is super impressive. They might have found a challenger to the fire-fighter drama, if ratings hold.

ABC’s Marvel’s Agents of S.H.I.E.L.D rose to a 2.1 rating. That’s down a lot from it’s premiere rating of 4.7 last year, although it’s important to note SHIELD is a heavily DVR’ed show. Projections from Late + 7 indicate it would reach a 3.1 rating, but that’s still down 58% from its debut.

Chicago Fire premiered to a 2.7 rating, proving that a good cliff-hanger can be everything and killing off a character, means huge numbers. The show set a new high for viewers as 9.4 million tuned in for the premiere, up 42% from the May finale.

CBS’s Person of Interest fell to a 1.8, down 22% from last fall. It opened to 10.7 million viewers.  DVR views might save them though.

Longtime runners NCIS: New Orleans drew in 17 million with a rating of 2.5, although it was down 17% from last seasons premiere of NCIS: LA. For now, it’s still the most watched fall premiere, taking the title from Madam Secretary.