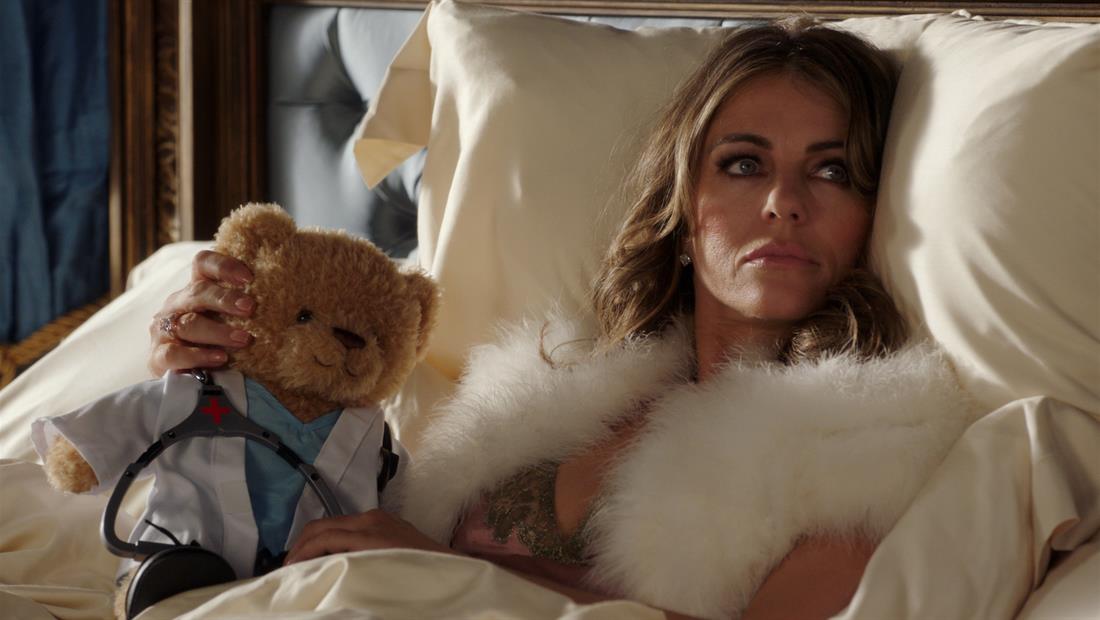 It was a pretty slow episode of The Royals this week up and most of it was spent waiting – waiting for the DNA tests to come in, waiting to see what would happen with Robert’s return, waiting for Eleanor and Jasper to get it right, waiting for Cyrus to finally die. I mean, you get it.

Queen Eleanor took a sick day while waiting for the DNA results and ended up taking her mind of it by watching a ton of mindless television – a first for her. Although it was rather enjoyable to see her be human for a change rather than a plotting and ruthless woman in power. The welcoming change courtesy of her her new Lord Chamberlain, who was taking really good care of her all throughout.

We got more intel on the Kathryn front – you know the girl Prince Liam is sleeping with and the girl Robert is dreaming about on his deserted island. In flashbacks we see the brothers first met Kathryn at the bar she worked at. She had an immediate connection with Liam but Robert swooped in and used the “she’s mine cause I’m going to be King” card. Liam stepped aside but his feelings never truly went away, especially when he saw that Robert was keeping her a secret because he was about to be king and couldn’t jeopardize it by dating a “nobody.” Ice cold. I guess that’s why Liam doesn’t feel any shame going after his late brothers girl now… but that’s definitely going to change when he realizes Robert is actually alive.

We know Robert still does have feelings for Kathryn so I wonder if this will drive a wedge between the brothers? We don’t know much about him at this point only that he was plagued by the stress of becoming the next King of England. We can assume that all of the pressure caught up with him and he crashed his own plane and stay stranded on the island to get away from it all. His siblings have described him as a great and noble man and Liam even looked up to him and based his decisions on the “what would Robert do” template, but from what I’m seeing, Robert is someone to be afraid of. I feel like Liam’s always been afraid of him and stuck in his shadows and I can’t help all the “Robert is dangerous” vibes I’m getting. Is he unhinged? Is his comeback something we should worry about?

I don’t know how it works in the English monarchy but if the future King of England was found alive after a year of people thinking he was dead, you’d think there’d be more noise about it right? Would his rescuers really just drop him off at the palace and let him roam around until he walked into his mother and sister and scared them half to death? Would there not be any medical attention? Why isn’t anyone more concerned except for Eleanor, who literally fainted at the sight of her brother? It’ll be interesting to see how this all plays out but for now, it’s all SKETCH!

Robert’s return will once again take all the light off of Liam, who was gearing up to make his debut as King of England after the DNA tests came back positive. Someone call Maury –  King Simon, you ARE THE FATHER. Thank goodness! England really needs someone that isn’t a homicidal maniac with cancer and an erection problem running the country, right? Liam is all ready to break the news to his people and be the King they all deserve when suddenly, his bro comes back from the dead to take back his spot in the monarchy? Definitely not fair.

And while everyone’s dealing with royal business, Eleanor is just embracing the fact that she’s finally happy. Jasper and his new bae had a few hiccups after they realized they were really bad at this “couple” thing. I mean, they couldn’t even write their own romantic notes to each other without the help of wordsmith James! However, the minute the figured out that they were both self-sabotaging themselves because they were just to scared to open up and not really trying their best, things got better. I’d love to complain that the Princess doesn’t have much of a storyline aside from her love life but really, I’m so obsessed with them, I can’t even.

What are your thoughts? How will Cyrus handle Robert’s return? Will things change drastically in the palace? What will Liam do about Kathryn now that Robert is back? How will Wilhemina handle all of it now that Liam rejected her? Where are Cyrus’s daughters? Will Eleanor and Jasper actually work out? Will we ever see Ophelia again? Why is James’s daughter so present in recent episodes?

The Royals – Passing Through Nature to Eternity (3×02)