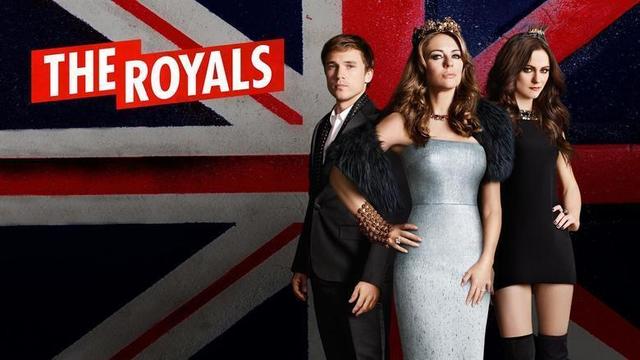 The Royals are finally back and I can’t tell you how much I’ve missed all the sex, drugs, filthy one-liners and deception.

We kick things off about 2 months after King Simon’s death. Cyrus is now king and obviously loving every minute of it. Meanwhile, Helena is “pretending” to get over her husband’s death, while the children are actually still struggling with it and the fact that he wasn’t really their father… or so they’re told.

Cyrus decides he has to reinstate Liam and Eleanor to the palace in order to make it seem like he’s controlling them and to revamp his image with the people. Plus, the siblings have been getting pretty out of control, especially Eleanor, who continues on with her wild partying ways. He reinstates them to the palace and returns their security detail, only if they apoligize. Liam is like “hell no,” but Eleanor surprisingly says she’s sorry and kneels down to kiss the Kings ring. Is she crazy? Loosing it? Smoking too much crack? Nope… she knows the only way to take him down and prove that he killed their father is to be on the inside. Never underestimate a princess with heavy eyeliner and vengeance.

Jasper makes a return, but really, he was never really gone. He knows he screwed up and broke Eleanor’s trust by sleeping with her mom (ew gross), but he’s been trying to make amends every since. Even though he doesn’t work for the palace anymore, he has been following (stalking) her around Europe making sure she’s safe… and he tells Liam that she’s been a hot mess of emotions and sadness. Eventually, Liam requests that Ted hire him back as his security detail. Apparently, the two realized they made a really good team after Jasper tried to help him get the truth out of Mr. Holloway, who Cyrus swore to secrecy. I mean, if anyone stands a chance at finding out what really happened to King Simon, it’s these two. Plus, we need Jasper’s sexiness around for Eleanor.

But Eleanor is now in quite the pickle. She pretends to be pissed off when she finds out Jasper is now guarding her brothers body (hey, at least he won’t sleep with him… I hope), but you can tell she’s kind of happy he’s back. That is until she opens her door and finds Beck standing there… and he tells her he finally left his wife! Whoa…. did not see that coming. I’m all for Team Jasper, but Eleanor has always loved Beck.

Liam’s love life is a little less existent. Ophelia left for school in NYC, which if I remember correctly was all because of Liam’s ex-gf Gemma. Anyways, she’s been ignoring the Prince’s phone calls and by the end of the episode has disconnected her number. Will we see her again this season?! Seems like her dad needs her. He’s been drinking again, talking with a ghost of his dead wife and ordered by Cyrus to trail Liam. Not fun.

She’s also being haunted by the Dominion, aka the anti-monarchist’s symbol. Liam still has the necklace with that symbol from the night he got so hammered and slept on the street. He can’t figure out what it is, but Helena knows. The symbol is burning in her yard and the duchess basically hints that this group is responsible for both Simon and Prince Robert’s deaths. “What are you going to do about it,” she asks he daughter. Yeah Queen?

As for Cyrus- he’s enjoying eating his swan (or not) and looking at bills with his face on it, but that all comes to a screeching halt when Prudence walks in with her growing baby bump. She tells him that he can change him image to his country by getting married and having a child, but he’s not interested. She threatens to go to the press, but he replies, “I’ve got 99 problems, but a bitch ain’t one.” Yep… the King dropping Jay-Z up in here! Don’t worry though, Prudence isn’t phased. She’s got plenty more up her sleeve!

Royals, what do you think of the upcoming season?! Will it be just as juicy as the first?!

Related Topics:the royalsroyals
Up Next

The Royals- Is Not This Something More Than Fantasy? (2×03)