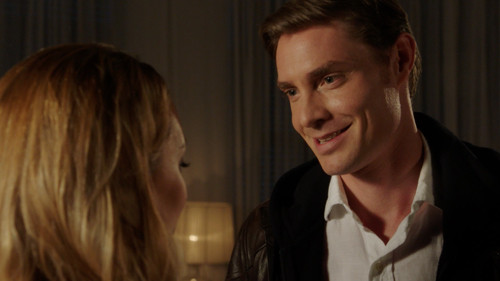 There were a lot of things that rubbed me the wrong way on this weeks The Royals and it wasn’t just that Cyrus decided to screw his lookalike. Although that was rather disturbing.

This week, we witnessed the dramatic return of Prince Robert. While the writers tried to make it seem like it was a huge moment, it felt a little misguided and very questionable. Robert, although someone we’re supposed to “trust” and be “impressed” with, is very shady. His mannerisms, his expressions, the way he approached Eleanor and his mother when he was dropped off by his rescuers. It was all so odd. And I can’t help but shake the fact that he’s hiding a lot more than he’s letting on when it comes to his “sabotaged” mission, which he’s blaming on Ted Price. Seriously – why did he wait so long to call SOS for help? What was he hiding from? Why did he waltz back into the palace and start acting like nothing had changed?

In fact, a lot had changed since he went “missing.” For starters, their father was murdered. Then Cyrus became King but is slowly succumbing to his cancer. Oh and Helena denied that Eleanor and Liam were Simon’s children but then retracted it in order to place Liam on the throne after a successful #KingLiam movement. Oh and Liam started sleeping with his brother’s ex-GF… and just as things were getting good between them, Robert returned from the dead and made things really awkward.

Seriously, I felt so bad for Liam during this episode. It seems like he’s always been stuck behind his brothers shadow and when he was finally ready to take on the throne and bring his new girl with him, he was shot down once again. This time, he couldn’t really decide if he was happy that his brother was actually alive or sad that he would have to end his relationship with Kathryn. And could Robert be any more intrusive than by ambushing his ex by just showing up at her doorstep? Not only does she feel horrible since she’s been sleeping with his baby bro but she literally looked like she saw a ghost… and it was far off.

Out of all the girls Liam’s ever been with, I like Kathryn the best. That’s why I’m taking their breakup pretty hard here. It doesn’t look like she’s really “happy” that Robert is back – he was always ashamed of her. But Liam knows they can’t be together so the best thing to do is just call it quits. Of course, we know Robert is still in love with her so he won’t be letting go that easily.

And it seems like that’s really what Robbie came to do – cause a ripple in something that was changing for the better. He stole Liam’s girl and then the crown. After all with Robert back, he’s the next in line for the throne and there was a moment where Liam even stepped back into his brother’s shadow again – very symbolic.

He’s even ruining things for Eleanor, who seems to look up a great deal to her brother. She’s been plagued by guilt since she never called him the day he reportedly “died” because she was getting drunk and high. Now that he’s back she wants to impress him but knows that he’s going to be skeptical of her new happiness and the help – Jasper. I don’t entirely blame Robert here though. I love Jasper but Robert just wants best for his sister and that really isn’t a lying con-artist who slept with her mother. Surprising how everyone has turned a blind eye to him isn’t it?

Scoring the crown won’t be as easy as Helena thinks however thanks to Cyrus’s newfound motivation. Cyrus snapped out of his funk when his ex-wife (and mother of his daughters) stopped by. It seemed like she was on #TeamHelena but was quick to encourage Cyrus not to give up and find his groove back. Heck, anyone will stab a friend in the back to become a royal right?

I do have to admit, Cyrus’s character is becoming kind of a hard pill to swallow. No pun intended. I used to find joy in his antics and now, there’s a void that’s not being filled. I’ll also add that for the first time, the acting in this episode was pretty hard for me to watch. Maybe the characters don’t feel like the story is authentic anymore? Who knows. What are your thoughts?