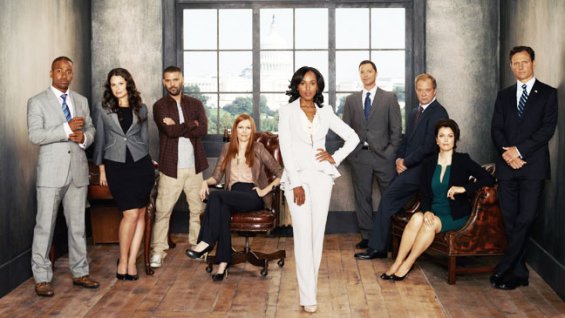 “We’re in a very different spot and everybody has been wiped clean, and anything goes, in a weird way,” Shonda Rhimes recently told The Hollywood Reporter. What does that really mean? Well, we’re hitting reset on the upcoming fourth season of Scandal. When the show returns from hiatus, everything will be different and in a way, that’s sort of a good thing. We left off season 3 with Olivia Pope realizing she was the scandal, aka, probably the greatest realization ever. So what now? Olivia Pope and Associates doesn’t exist anymore and Liv ran away with Jake. The President has been re-elected, at the cost of losing his son. No one knows that Olivia’s father is actually a master manipulator whose behind every horrible thing that’s ever happened, except for Harrison, whose as good as dead at this point. How do we pick up from here?

How much more Scandal does Shonda have in her?

“I’m not worried about that at all. I’ve already decided when Scandal is ending. I think there’s only so much Scandal you can tell satisfactorily. The Fitz-Liv thing can only be told so long and in such a way. It’s not a 10-season or eight-season show. I’ve already decided how long that is and what that’s going to be. I’m not really worried about that,” she told THR.

Does that mean it’ll be a good 4 more seasons, which should be the equivalent of four years= the president’s term? Or, will we still get a little peek into what Fitz is like when he isn’t President anymore? It would definitely be interesting to see his love affair with Liv play out outside of the White House. Do they finally get Vermont? Unfortunately, Shonda’s decisions aren’t at all affected by what the viewers want because she already knows how everything will end and she’s set herself parameters to make sure she sticks to the story she wants to tell.

“It would be interesting. But I’ve given myself a parameter of what that is, and whether or not that means we end up deciding to stretch or shrink his presidency based on that remains to be seen,” she said.

That isn’t to say that his death isn’t tragic or sad. On the show, Harrison was a downright great Gladiator. Whose most affected by his death? “Olivia, really, but all the Gladiators are. It will be very devastating for Abby in a surprising way. You’ll see how she’s coping with it in a very different way than you would expect.”

How is everyone impacted by Olivia’s departure?

Hucks family is alive! How does Huck deal?

Much of season 3 focused more on the Gladiators individual story-lines rather then the love affair between Liv and Fitz. Shonda is super excited to get back to Olivia-centric storytelling, which she had to veer away from because of Kerry’s pregnancy. I’m all for the Olivia storyline, but I don’t want to fall off with the other potential story lines either. We now know the world doesn’t only revolve around Liv. She doesn’t have it all together like we thought. In a way, Abbey took over Liv’s role this season and I hope she holds onto that bravery and freedom. The Huck storyline should be really interesting because now Quinn’s feelings are also in the mix. It’s not just solo Huck taking on this realization. He’s fallen in love and so has she. I love me some Liv and Fitz, but I also like the others too.

Sound off below with your thoughts/hopes/wishes.

TVD Season 6 Spoilers; Are You Ready?