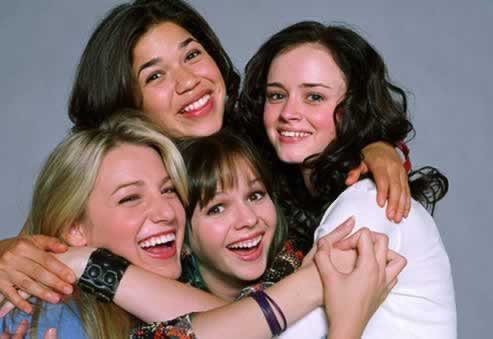 Sisterhood of the Traveling Pants Reunion!

My favorite sisterhood reunited this weekend and I was fan-girling harder than a 12-year-old at a One Direction concert. Why? Because this reunion means that one, their off-screen friendship is just as solid, if not better than their on-screen friendship. Despite some of them being a little more famous than others. And number two, there is a new Sisterhood of the Traveling Pants coming out!

Amber Tamblyn posted  picture of the foursome on Instagram writing: Blake Lively starred as Bridget,  Alexis Bledel as Lena, Amber Tamblyn as Tibby, and America Ferrera as Carmen in the 2006 and 2008 movie series Sisterhood of the Traveling Pants and SOTP part 2.  It was a simple time, pre Blake Lively’s nose surgery, where no one frowned upon girls wearing the same pair of pants for more than a day.

Although they all became friends on set, they don’t think of each other as “movie friends.”  The same cannot be said for Serena and Blair…

The sisterhood has not only exceeded in the friendship department, but also in their careers and personal lives.

Lively starred in the hit show Gossip Girl, got married to Ryan Reynolds and recently launched her lifestyle website Preserve.

Ferrera got married to Ryan Piers Willam in 2011 and produced/starred in Tribeca Film Festival indie X/Y.

Tamblyn married actor David Cross in 2012. She guest-starred on Two and A Half Men and is working on the upcoming Quentino Terrentino blockbuster, The Hateful Eight, starring Samuel L. Jackson and Kurt Russell.

So, what’s stopping them from taking a little break and reuniting with the movie that sort of put their names out there? Absolutely nothing! Earlier this year, Alloy Entertainment confirmed it is working on a third Sisterhood movie, Sisterhood Everlasting. It’s based on author, Ann Brashares final film, which catches up with the four friends ten years later. And they probably don’t all fit in the pants anymore. If they do, call me impressed! Although I do remember, Tibby dies, so, let’s hope they write that out of the movie, or I’ll forever be devastated.

“The ‘Sisterhood’ series is one of Alloy’s most cherished properties and we are looking forward to continuing its legacy with ‘Sisterhood Everlasting’ nearly a decade after the first film was released,” Alloy Entertainment President Les Morgenstein said in a statement. “The original film brought together an incredible group of talent who we hope to unite for fans once again.”