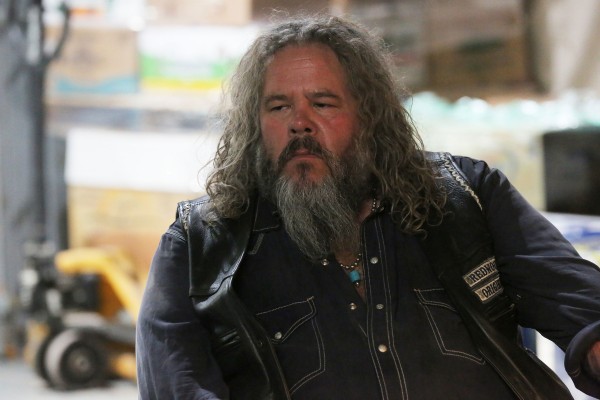 With six episodes left in the final season of Sons of Anarchy, you can expect drama to be an all time high. People are losing eyes, Gemma has fully gone psychotic and Abel has the making of being a child serial killer.

Jax is still on a mission to take down August Marks and his crew. He’s dead set on helping Tyler overthrow Marcus, but is that really wise? I understand that he wants to shift the gun business to the Mayans, but August Marks isn’t afraid of flexing his power. When Marks was late to their meeting, it should have been a red flag. Like for instance, did anyone at any point wonder why Bobby was still gone? Bobby was driving along his merry way on the highway when out of no where Marks’ crew comes out of nowhere and runs him off the road. It’s not as if Bobby can run away.

Finally the head of Marks security rolls up and hands Jax a package. Since when does Jax deal with anyone that isn’t August Marks? Inside the package there’s an insignia from a club jacket and a video of a man screaming, which finally shows Bobby’s bloody face. When he looks further into the package, there’s an eyeball. Poor Bobby! Marks knows that Jax is trying to eliminate him, but what will Jax do? Whatever it is, I guarantee there will be a lot of bodies and blood.

Last week we watched Gemma confess Tara’s death to the waitress. Apparently one confession wasn’t enough, she felt the need to confess to Thomas. Why did she kill his mommy? Because she was trying to be a good grandma. Good one Gemma! Great to know she can still justify herself. But of course her confession is going to come with a price, in the doorway was Abel. And with his behavior these past couple weeks, he’s probably not the best person to know her secret.

Back in the Pen

Juice is still alive! Jax spared his life, but only at a cost. He sent him to get arrested, which wasn’t too hard to do with his record. Now he’s continently in the same jail as Lin. What other errands with the club send him on? And does Juice really believe that the MC isn’t just using him as a pawn?

This past episode was filled with drama and secrets. It’s only a matter of time until it all comes out. Nero wants out of the life, but will Gemma go with him? Wills he even live that long? What was Abel staring at in the end of the episode? There is something wrong with that child, but will he do something about what he overheard? Find out next week at 9/10C on FX! Share your thoughts with us on twitter at @craveyoutv!