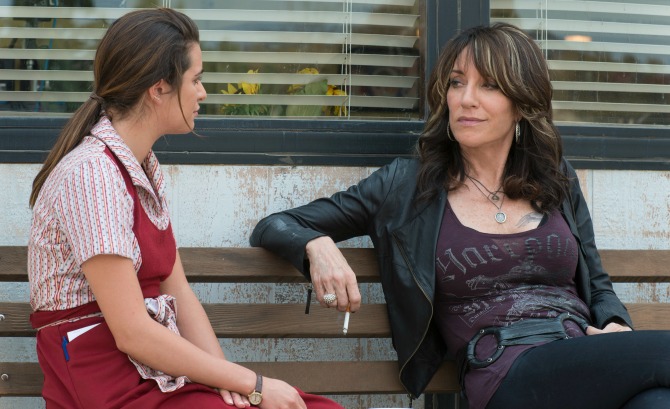 Now that Lin is in custody, the club can get their focus back on taking down August Marks. Jax easily receives the support of the Mayans and the Grim Bastards and put his plan into action. Taking down Marks’ main man not only made Alvarez happy, but it proved that to Tully and the white supremacists that the club doesn’t mix race with business.

The last episode left us wondering if Juice was going to snap and kill Gemma, but we quickly found out that he let her go. Where was the first place he went? The Mayans. Goodness Juice could you get any dumber? His big plan was to sell club secrets to Alvarez in exchange for a ticket to Puerto Vallarta. Too bad De Dios is back in cahoots with SAMCRO.

Watching Bobby and the guys take off Juice’s cut and throw him into a closet with Nero was terrifying, because you know what’s going to happen. Juice is in deep shit. Is this where he breaks down and tells Nero the secret he knows about Gemma? How long will he hold back?

Nero is no fool. He’s suspicious over Juice’s vague comments and the fact that Gemma’s car was being used as collateral for Juice. How did he get it? It’s all starting to add up, but we can always count on Nero to have a clear head and see past the bull shit.

Gemma is starting to lose it. She went from talking to Tara’s ghost to being nervous about lying to Sheriff Jarry. Jarry may buy her story about the two Chinese men coming out of Tara’s house the night that she died, but will Gemma be able to keep her details straight for a defense attorney?

Speaking of the sheriff, we absolutely love the relationship between her and Chibs. Could it be any more perfect?

Even though this episode was a building block to something bigger we know is on it’s way, it was still suspenseful. Will Juice be able to keep a secret? Will Tig and Venus come back together? Will Jax ever be happy or does everyone have to die?

Let us know your thoughts on Twitter @craveyoutv! Find out next Tuesday at 9/10C on FX!