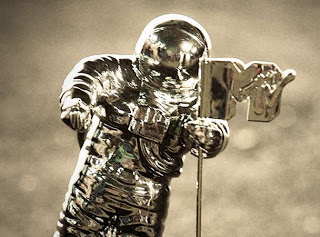 Music meets television. Thats what MTV stands for. Yet MTV probably only plays music once a year; during the MTV Video Music Awards. After tuning in for just a couple of minutes, the tone of the show was automatically understood; bland with a side of dull.

Year after year, the VMA’s do little to astonish and much to disappoint.  From horrible performances, terrible hosts with mediocre jokes, and far to many commercials, the VMA’s do not live up to their hype anymore.  What happened to the good old times of memorable performances and shocking moments? What happened to Britney performing “I’m a slave for you” with a snake wrapped around her body? Or Madonna kissing Britney and pretending that she never kissed Christina after? What happened to Beyonce encouraging all the single ladies to put a ring on it? For the love of god, where is the real slim shady? The minute even Lady Gaga disappears from the scene with her meat dress is when you know things are going terribly wrong in Hollywood. Really, not even the Biebs? Truthfully, where did all the artists go?? Besides for Katy Perry, Rihanna, Nicki Minaj, Drake and Lil Wayne, the rest of “Hollywood” was simply m.i.a.

To those of you that are old enough to remember the good VMA days, its safe to say that the opening act is suppose to leave a last impression. Rihanna’s performance of her new single, “Persuasion” and “We Found Love” did nothing but rehash every other performance she’s ever had. It was boring and it was predictable. Not even Calvin Harris could save this one. That seems to be the tone of this years awards show; predictable. There was nothing to really justify the two hours of my life that I had just wasted. Even Pink’s performance was a let down. Aside from her amazing vocals, I believe I’ve seen that performance once before. Maybe the last time you did acrobatics at the VMA’s??

Yes Kevin Hart, we all make mistakes. MTV’s biggest mistake was taking you on as a host.  After watching Kevin host, I’m debating picking up the phone and calling Russell Brand back to host next years show. MTV tried to tie in the presidential election as a way to get teens involved in voting, whcih was a good move, but when the whole idea of “my president is black” comes about, I start to question why everything comes down to race? I’m not one to get involved into racial topics, but it’s the elephant in the room. No one wants to sound “racist”but MTV blatantly emphasizes it and plays the racial card. It just isn’t necessary. In addition, none of the jokes were funny,  well maybe except the one about Kristen Stewart. That was kind of funny, but she really deserved it. Especially when she was one of the few cast mates not at the VMA’s promoting part 2 of “Breaking Dawn.” Yep, it just got funnier.

Amongst all the bad, it seems hard to find a silver lining. Aside from giving mad props to One Direction’s manager for scoring them two VMA’s and a performance (take that The Wanted), and wiping away our tears as Frank Ocean touched the depths of our souls,  this night was all about girl domination. Girl power, if you must. Alicia Keys previewed her new single, “Girl is on fire” proving that real music does still exist.  I’ll even give it Nicki Minaj, who actually embraced her rap side and strayed from her barbie doll persona for a minute to lay down some authentic rhymes. All of that was nicely topped off by Olympic gymnast Gaby, who strutted her stuff and proved that she is the reason for America’s success in the Olympics. Taylor Swift concluded the show with her very first finale performance. “We are never ever getting back together” was full on T.Swift in her natural habitat. Fun, girly, flirty and innocent. That’s really whats most charming about her,  no matter how much music changes, she is who she is. After all that, I still believe that there is just a smidgen of hope left for the VMA’s. Till next year!

Blake Lively and Ryan Reynolds say ‘I do’