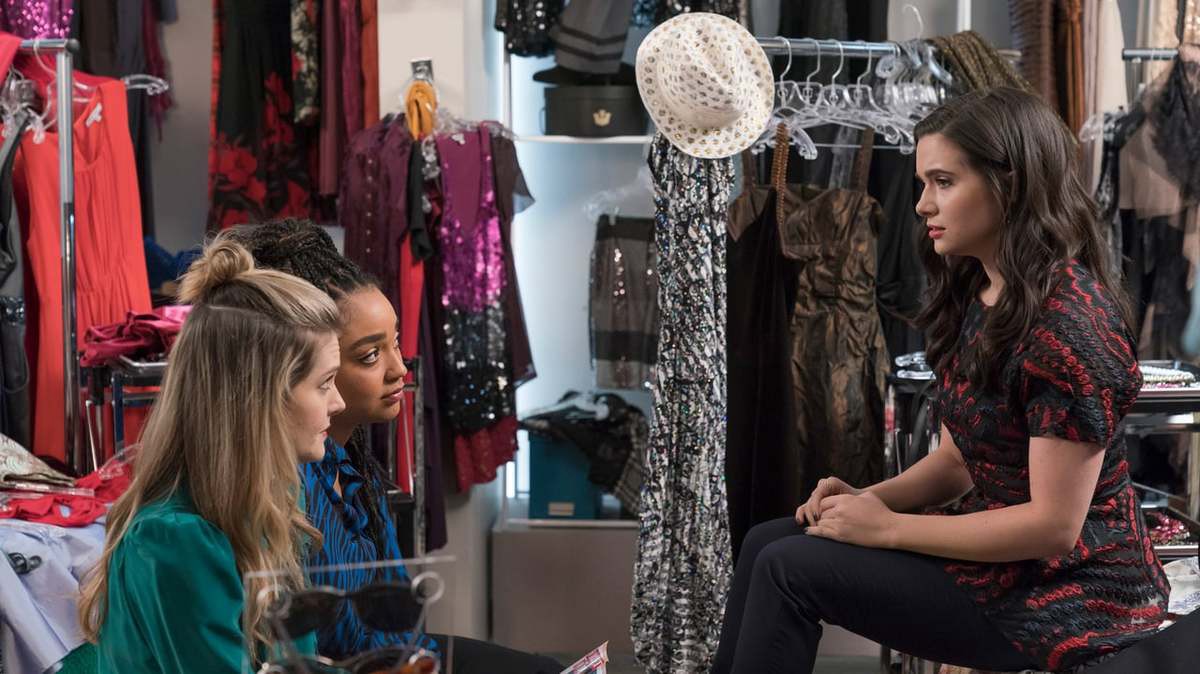 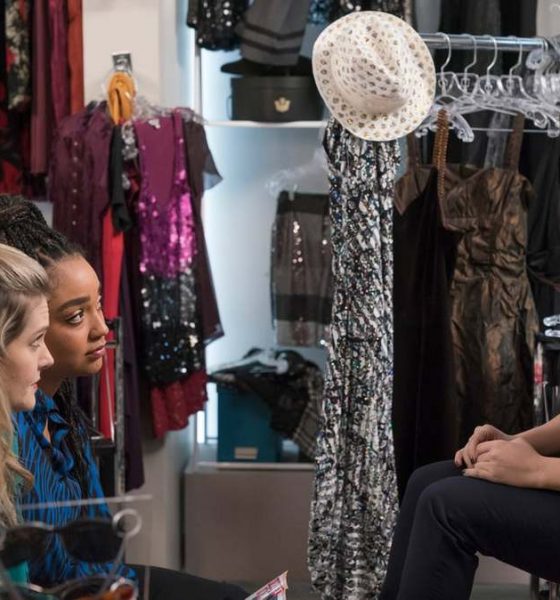 Scarlet and the women of Scarlet made some pretty bold moves on the season 3 finale of The Bold Type.

I know, it seems like the series just premiered and with the blink of an eye, it’s ending.

Please, take comfort in the fact that they will do this again in 2020. And yes, I know that sounds like it’s an eternity away.

Jane, Jaqueline, and Scarlet received much praise from their Pamela Dolan expose, but the controversial photographer wasn’t pleased in the slightest and lashed out online by calling them all “fake feminists.”

This resonated with Jane who questioned whether or not Dolan’s response to their piece had some merit.

The Bold Type excels because when it allows characters to question their own moral standards and realize that they aren’t flawless.

Much like in real life, there is always room for improvement and our ladies, along with the company, are a masterpiece in the making

We only grow when we’re examining ourselves and learning from it.

During Sutton’s fashion show, Jacqueline was stunned to learn that the magazine uses 14-year-olds and portrays them as women thus giving readers a skewed perception of reality which forces them to live up to unattainable expectations.

She’s worked at Scarlet for how long and she’s just finding this out? Alright.

Still, it struck a chord and overnight, Jacqueline overhauled the whole Fall Issue leaving the employees with just 17 hours to redo the missing pages.

The ask was nothing short of a miracle, but they did it.

The staff of Scarlet produced a magazine that would set the trends, become a bible for every woke woman and possibly cost them all their jobs.

The morning after the publication went to print, Kat, Sutton and Jane walked into the office to find the once sacred space was being cleared out.

To make matters worse, Jacqueline was nowhere in sight,

In retrospect, Jacqueline was acting as if her time at Scarlet was limited.

There were moments along the way that alluded to Scarlet not always being around as their safe haven. Does this mean the Fashion Closet — which has seen its fair share of secrets, laughs, ugly cries, and angry stomps — is gone for good?

Jacqueline’s “it’s my magazine until it’s not” comment was also telling; it’s as if she knew that doing the right thing, following her gut and being a bit controversial would cost her the gig.

But does it matter? Yes and no.

If it’s what needs to be done to invoke change in an industry that tends to gloss over certain realities to sell an image, then it doesn’t matter.

However, if we’re talking about the futures of all of Jacqueline’s employees, well, it definitely does.

I can’t help but think that Patrick possibly played a role in Jacqueline’s demise though he did seem to get on-board with running a cohesive print and digital platform.

What does all of this mean for Scarlet? I guess we’ll find out in 2020.

Kat, Jane and Sutton were also going through their own relationship woes.

After losing the election, Kat found herself a little lost in her professional life and torn over her romantic relationships.

Her campaign manager and current fling, Tia, and her ex-girlfriend who she still harbors feelings for, Adena, both wanted to be with her.

As she struggled to transition back into her life at Scarlet — makeup seemed so irrelevant after promising to fight abortion bills and for LGBTQ rights — she decides to distract herself by hooking up with Adena.

It was obvious that Tia wasn’t going to hold a spot in Kat’s life for much longer now that the election was over and politics weren’t keeping them together.

However, I was impressed with Kat’s realization that she achieved something great despite the loss and that in order to fully take advantage of it, she had to stop distracting herself with relationships.

Kat choosing herself was a classic “Bold Type” move. It may have been predictable, but it gave her back her power.

Also a “Bold Type” move? Adena accepting a job as the in-house photographer at Scarlet to make things especially awkward.

Clearly, the endgame is to bring Adena and Kat back together, but only after they’ve bettered themselves.

Jane was devastated by Pinstripe’s decision to cheat.

In her own words: “a pinstripe never changes his pinstripes.”

But it does seem like Ryan has changed his pinstripes.

Look, cheating is terrible no matter how you slice it, but the moment Ryan even locked lips with another person, he took the next train to see Jane and told her about it.

If Ryan was still the womanizing sleaze-ball she made him out to be he’d probably keep this a secret from her and continue kissing plenty of people on his book tour.

It’s a good thing Jane has best friends who remind her that it’s okay to let go of your conventional beliefs in order to make a decision that works best for you.

I love that she stood her ground and didn’t allow herself to be swayed by a man groveling at her feet, but at the same time, it would be stupid to call things off just when it wasn’t the smartest decision.

Jane forgave Ryan, which is awesome, but I could have done without his cheezy rom-com proclamation at her panel.

It was awkward and kind of made it seem like he didn’t take her job seriously, which took away from the good intentions.

We’ll see if Jane can truly get over Ryan’s cheating and trust him again.

Sutton won the girlfriend of the year award after she encouraged Richard to follow his dreams even if they took him all the way to San Francisco.

Things may have been working out perfectly for Sutton and Richard this season but having her support Richard despite knowing that it will put so much distance between them says a lot about who she is as a person.

While the storyline worked, it also didn’t push any boundaries — it was expected. We expected Sutton to push Richard towards attempting a new career since he did the same to her when she tried her hand at being a designer.

I hope this doesn’t mean we’ll be seeing less of Richard because if so, I do not support this new job situation at all.

It’ll be interesting to see if their relationship survives long distance. And where will Sutton live? Will she move back in with Jane?

However, given that Richard was still with Scarlet the night the Fall Issue launched, I have to wonder if he knew something about what was going to happen and purposefully not tell Sutton?

After all, he is on the Board of Directors which is seemingly who got rid of Jacqueline after not approving her creative direction for the magazine.

What did you think of The Bold Type finale? 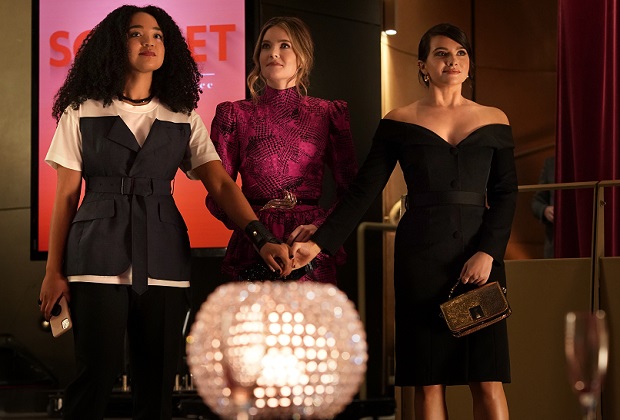 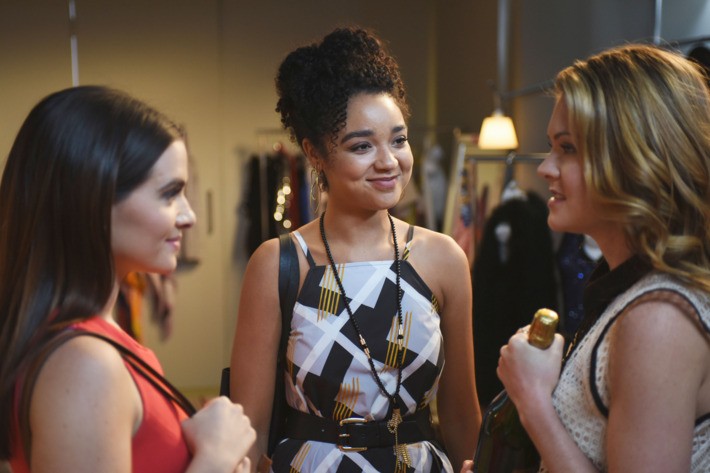