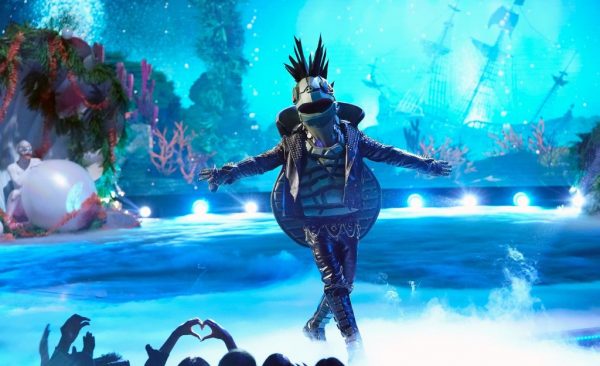 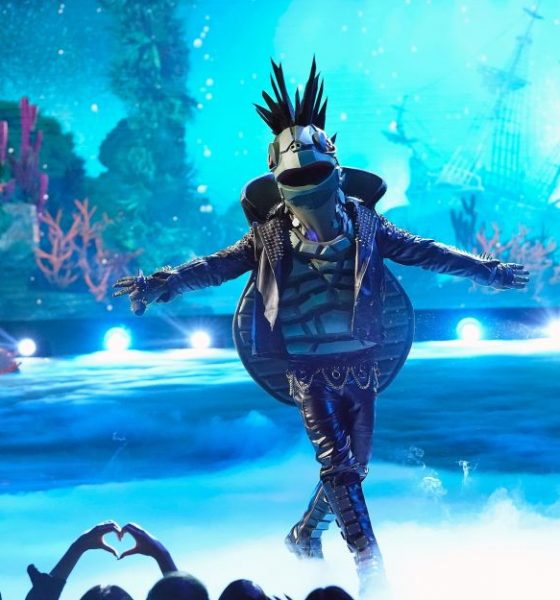 The Masked Singer Theory – Who Is The Turtle?

Turtle faces-off with Astronaut on the April 8 episode of The Masked Singer.

As two of the strongest male singers in the show, their showdown will surely be one to watch.

So before either could be eliminated, let’s take a guess at who’s behind their respective masks.

Here’s my theory on who The Turtle is:

Turtle has been a frontrunner to last on the show with each of his performances garnering praise and having great responses from the audience.

This means it could be a while before he is unmasked, and some people, like myself, just don’t have the patience to wait.

His clue packages have been tough to crack, but his most recent “Super Clue” on episode 3 x 10 is what triggered a chain reaction that led to tracing the clues back.

Here is Turtle’s latest hints featuring his “Super Clue” at about the 0:41 second mark of the video:

He shows a comic book priced at $10.13  with the title “The Amazing Adventures of Shellboy,” and though the name of the comic itself is probably irrelevant, my mind immediately went to superheroes.

Turtle also said “this is not another TEENY clue,” which made me think of Teenage Mutant Ninja Turtles, but that would be too easy, right?

Then it clicked in my head, he must be somehow connected to a teenage comic book character.

And the first character that popped in my head was Robin who is, of course, Batman’s sidekick.

So I went back and watched every one of his clue packages in order, and I noticed he always had superhero-themed elements:

This is a possible hint toward cartoon versions of The Joker, who has shot many similar guns.

Turtle can also be seen walking like a zombie in the video, which made me think of The Walking Dead.

And, oh yeah, the very first song he sang was “Kiss From A Rose” by Seal, which is part of the 1995 film Batman Forever’s soundtrack!

Plus a huge clue where the Turtle writes the phrase “Don’t Rave Ever At My School – Turtle” on the chalkboard (more on this later).

Turtle is Jesse McCartney, and here’s why:

Tell me he doesn’t sound exactly like The Turtle?

What do you think of this theory?

Am I on point or did I miss the mark completely?

Please feel free to chime in the comments section.

The Masked Singer Theory – Who Is The Night Angel? 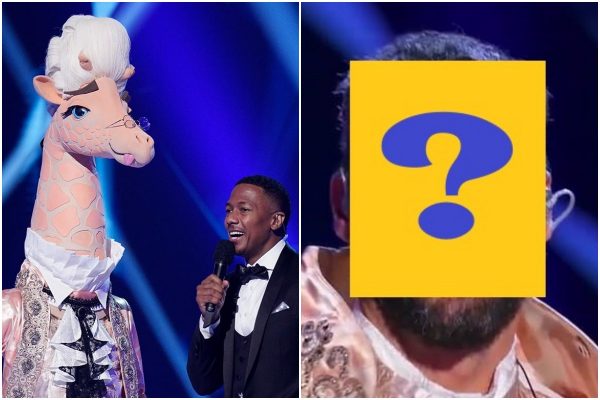 The third episode of The Masked Singer’s season 4 saw Group-A amp up the competition in their playoff round as Joel McHale makes a guest appearance.

McHale, who’s been on the show in past seasons, performed “Blurred Lines” at the top of the show while wearing a Robin Thicke mask, much to Ken Jeong’s chagrin.

Robin, Nicole, and Jenny enjoyed McHale’s performance, however, and he was a welcomed addition to the show’s panel of sleuths tonight.

At the end of the episode, Giraffe had to cut his run short as he’s eliminated and unmasked as a former Beverly Hills, 90210 cast member. 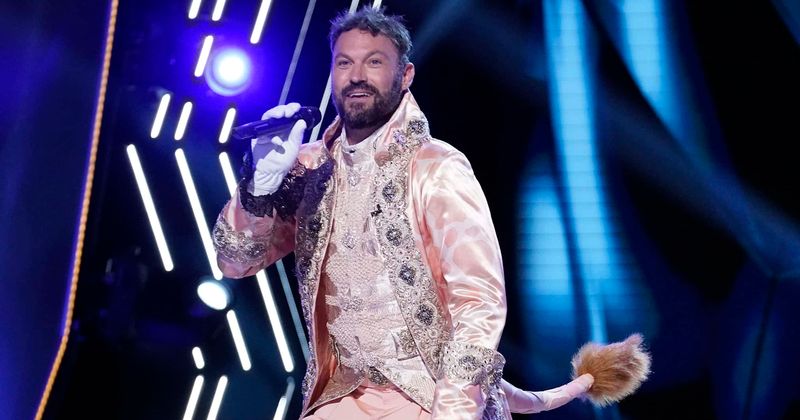 Brian Austin Green who portrayed David Silver on 90210 was voted out of the competition.

He performed “Get Down On It” by Kool & Gang.

Green was immediately disappointed at Robin because the two dabbled in hip-hop music together during the ’90s.

After his first performance, Robin even said “You ever get that feeling like you know somebody’s voice but you can’t put a face to it?” Which of course worried Green at first, but none of the panelists came close as their final guesses for his identity were all over the place.

In this episode, however, Ken went on a long rant that put the Giraffe and the rest of the panel to sleep as he talked throughout the commercial break to explain his (wrong) guess of Shia LaBeouf. 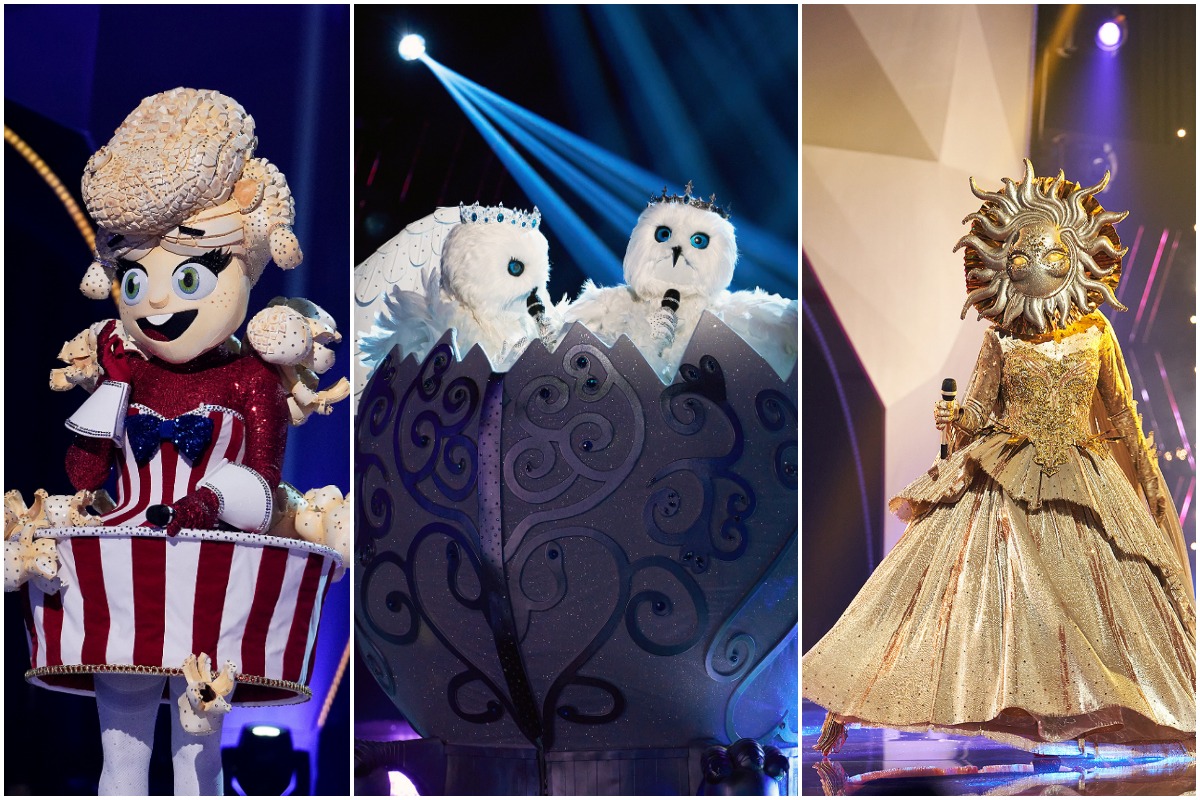 As for the rest of the field on Group-A, Popcorn and the Snow Owls had solid performances, but the Sun shone the brightest during this episode as the judges reiterated that she might have what it takes to win the Golden Mask this season.

Special clue: Planet Venus. “The second rock from the sun may be far away, but it should bring you closer to me.” – Popcorn

Special clue: Witch hat. “We will TIP our hats to WHICH ever one of you figures out the clue.” – Snow Owls

Special clue: Magic 8-Ball. “Will this magic 8 ball help you conjure up my identity? Outlook not so hot.” – Sun 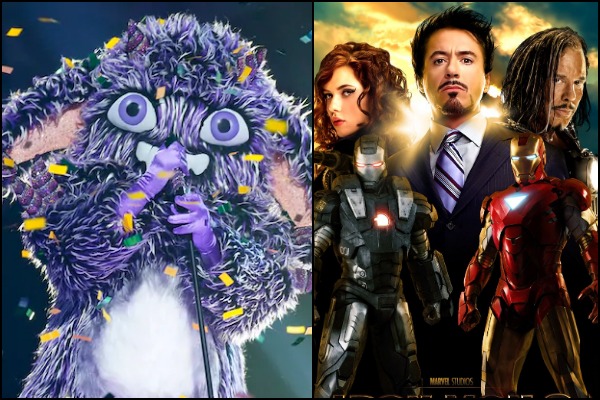 Following his shaky performance of “Stand By Me” by Ben E. King, Rourke removed his mask after declaring “Dammit, it’s hot, I’m taking it off” in the middle of his post-performance interview; effectively eliminating himself from the competition. 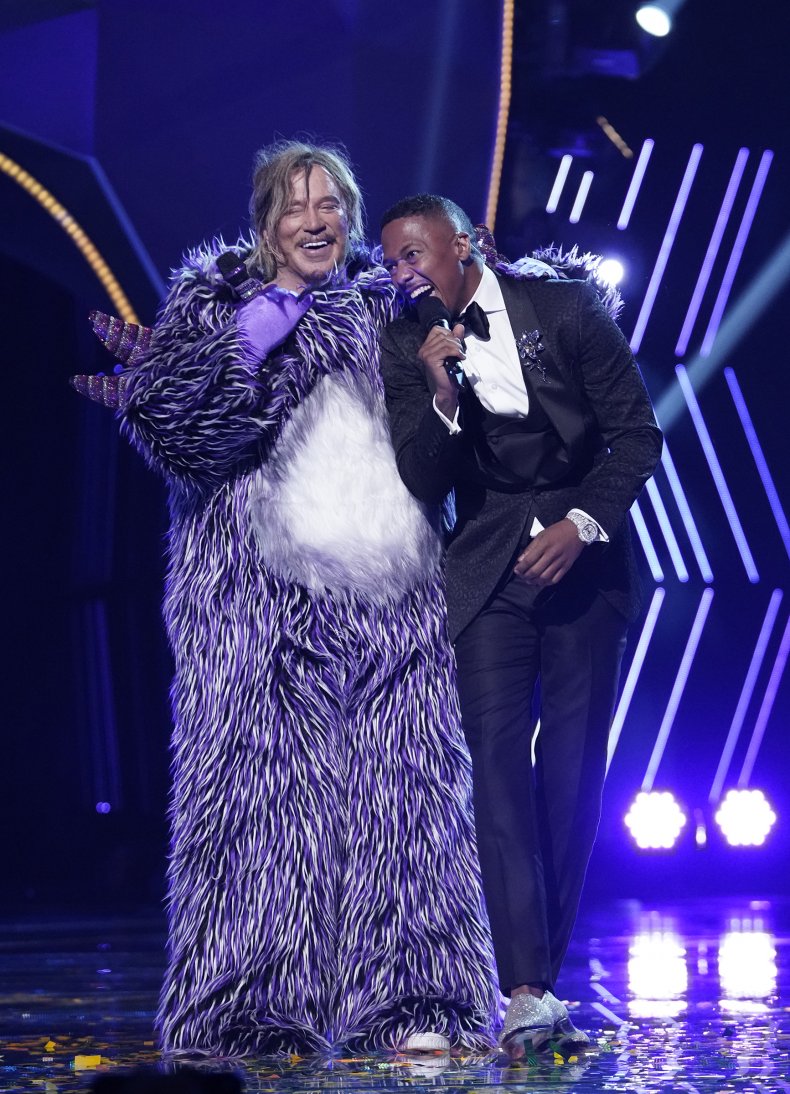 In unprecedented fashion, Rourke reveals himself as Gremlin on The Masked Singer.

The judges, and Nick Cannon all seemed genuinely flabbergasted and couldn’t stop Rourke.

Three of the four judges, however, got a chance to guess who Gremlin was before he unmasked himself, and Jenny guessed correctly.

Group B Singers Moving On

The singer who performed at the top of the show was Crocodile who shared his rendition of “It’s My Life” by Bon Jovi.

Afterward, the judges had a wide range of guesses including Johnn Hamm (Ken’s guess), Nick Lachey, and Donnie Wahlberg.

Of course, after Robin’s guess, Jenny had a little fun and teased the Crocodile about being her husband and asks “Donnie, is it you, baby?”.

Baby Alien was up next with the most unique costume the show has ever showcased that concealed his entire body while he performed “Faith” by George Michael.

Unable to go off much from his physical appearance, the judges leaned on the clues and guessed Ralph Macchio, David Schwimmer, and Freddie Prinze Jr.

Seahorse rocked the show and got declarations from the judges as a favorite to win it all this season after her rendition of Rihanna’s “Only Girl (In the World).”

The judges believed she was a legitimate singer and drew comparisons to young artists such as Halsey, Hailee Steinfeld, and Bebe Rexha.

Following in the tradition of vague costumes, Whatchamacallit rapped “I Wish” by Skee-Lo.

The judges were impressed with his flow and believed it could be Swizz Beatz, Dame Lillard, or Tyler the Creator under the mask.

Serpent was the final survivor of the night who performed a smooth and soothing version of “I’m Gonna Be (500 Miles)” by The Proclaimers.

The swaggy crooner was in full character and was unwilling to break character as he hissed and moved like a snake with a costume that had moving appendages to boot. 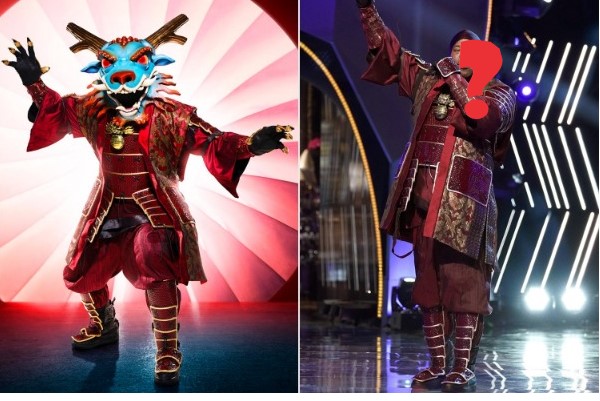 The Masked Singer kicked off its fourth season with six new singers from Group-A taking the stage to make watching people wear masks fun again in 2020.

At the end of the night, the Dragon exits first from the show and is revealed to be legendary rap artist Busta Rhymes who had an electrifying performance with his version of “Mama Said Knock You Out” by LL Cool J. 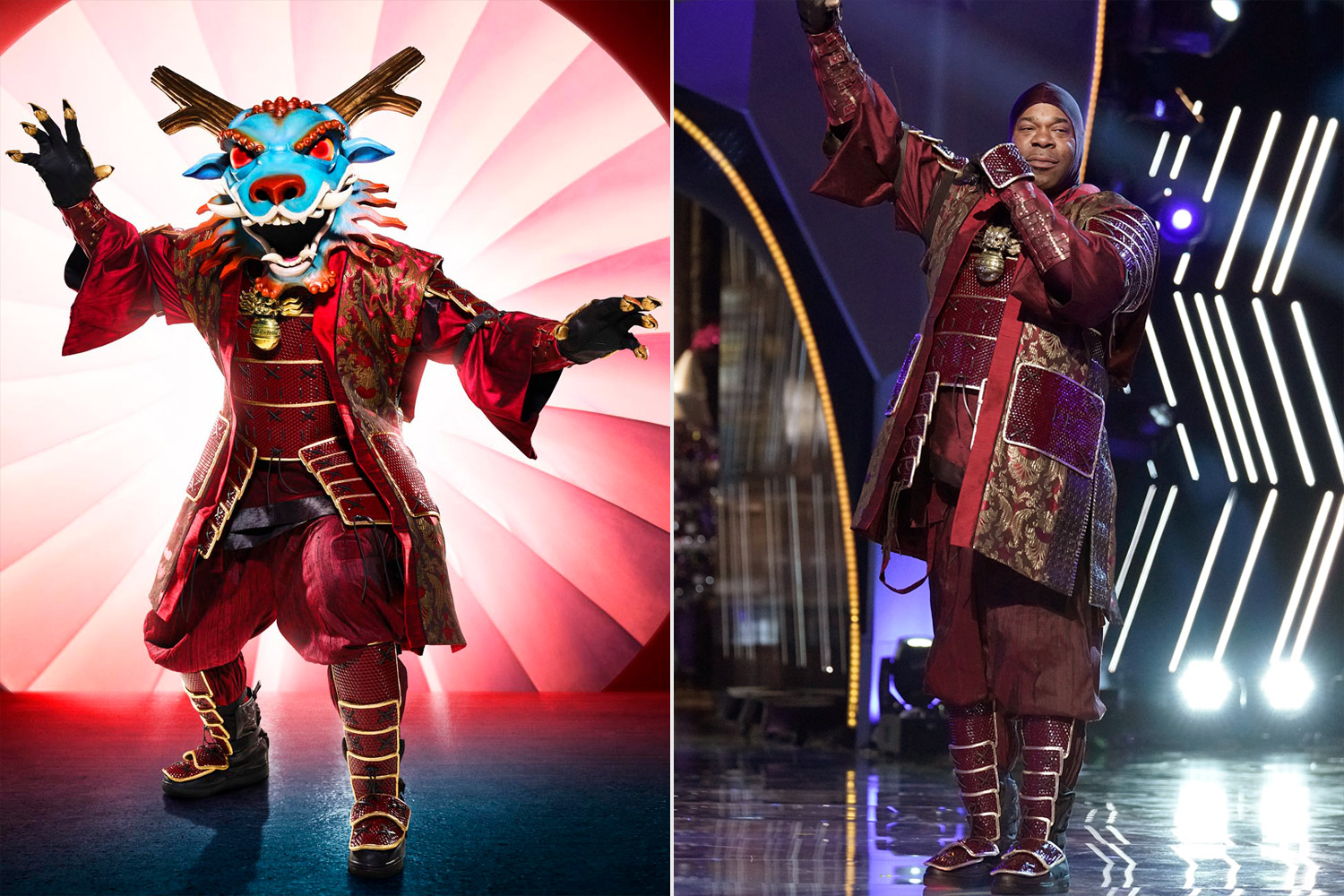 The judges, as well as Nick Cannon, all seemed to narrow the identity of the Dragon fairly quickly based on his very first verse along with Cannon claiming that he knew the minute the Dragon walked on stage.

However, Ken Jeong wasn’t quite as astute when he guessed the performer was Olympic swimmer Michael Phelps, so it’s nice to see Ken still retaining his penchant for bad guesses.

A new wrinkle added this season is that the judges are now competing for the Golden Ear, a prize awarded to the judge with the most correct “first impression” guesses by the end of the season.

Both Jenny and Ken miss the mark tonight as they guessed NFL players Adrian Peterson and Marshawn Lynch respectively and miss out on scoring a point on the guess tally.

Meanwhile, both Robin and Nicole guessed Busta Rhymes correctly but entertained switching to DMX, who is also a legendary rapper with a similar raspy rapping voice as Busta Rhymes.

The Masked Singers Moving On

The remaining contestants from Group-A are Sun, Giraffe, Popcorn and the Snow Owls, who are the first duo to compete on the show.

Sun shined on stage with her rendition of “Cuz I Love You” by Lizzo and her clue package led the judges to believe she might be Demi Lovato, Madonna or Katarine McPhee

Giraffe, whose costume has set the record for the tallest one in The Masked Singer history, sang a cool rendition of “Let’s Get It Started ” by Black Eyed Peas which gave the judges the impression that he is either Travis Barker, Garth Brooks or Vanilla Ice.

Popcorn then came on stage and immediately buttered-up the judges and audience with her charm as she popped off “What About Us” by Pink and made the judges think she is Carole Baskin (Ken’s guess, obviously), Mary J. Blige, or Tina Turner.

Finally, the performances concluded with the Snow Owls, who performed together on a stylish giant broken egg. The duo sang “Say Something” by A Great Big World which had the judges guessing a bevy of iconic pairs including Amy Grant & Vince Gill, Maureen McCormick & Barry Williams, Donny & Marie Osmond, and Eugene Levy & Catherine O’Hara.