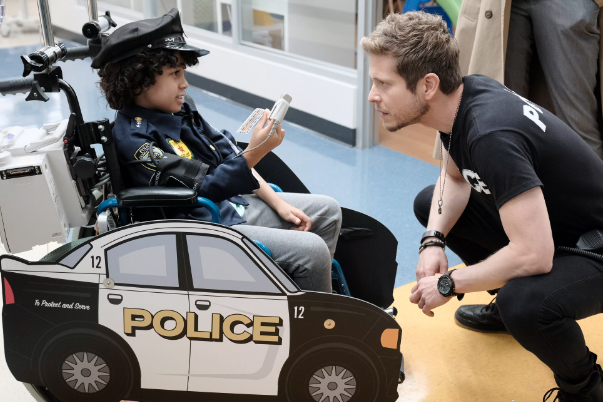 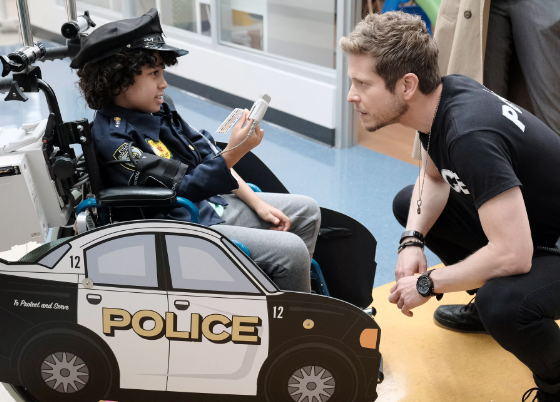 Seeing a title like “The Germ” doesn’t evoke many heavy emotions (unless you’re, of course, a germaphobe), but it is exactly why they say to never judge a book by its cover.

The Resident has a pretty lengthy track record when it comes to making me ball my eyes out.

Next to Lily’s unsettling death by own doctor storyline, the death of Jasper is high up on the list.

Truthfully, any cancer-related death is.

Cancer doesn’t pick and choose who it kills off, which is partly why it’s so devastating.

I try to believe that there really are selfless and kind doctors like Conrad, Nic and the rest of the team.

What they did for Jasper — throwing him a police mystery birthday because they knew he wouldn’t make it to his police-themed shindig — was amazing.

Everyone chipped in and acted out their parts so believably. Devon might have complained about the job not paying enough, but nothing compares to putting a smile on a sick child’s face.

And Mina was mistaken when she said Conrad and Nic have a future in children’s theatre — they all do.

If it wasn’t for doctors like these who go the extra mile for their patients, Chastain wouldn’t have the stellar reputation it does currently.

Dr. Bell should be thanking all of them.

Instead, he’s selling out to Qua Vadis on the promise of trips to Cabo and whatever else.

His nickname was HODAD, so I never expected him to put patient safety and satisfaction first, but to be completely careless in changing up products that employees use? That’s arrogant and proves that he’s only interested in the profit margin and lining his own pockets.

He’s a sell-out in every sense of the word.

And I’m glad he’s been called out on him. Quo Vadis’ reputation may be stellar, for now, however, this is far from over.

You know how I know that? Abe Benedict, the doctor Dr. Austin credits all his knowledge to.

Before even giving Quo Vadis parts the time of day, Austin had to clear with Benedict why he made the switch.

Benedict gave him some spiel about only accepting new inventions if they were proven to be better, however, that’s a lie.

Much like Bell, Benedict was lured in by what I’m assuming is organic vodka, overpriced watches and the promise of lavish tropical vacations on a private jet.

So yeah, I’m beyond confident that this will come back to bite them somewhere that doesn’t usually see the light of day because while Julian may believe in the products, her boss is a grade-A con-artist who is going to roll up his sails the moment the going gets tough.

And I cannot wait for Bell to try to weasel out of that one after multiple people on his team warned him.

Speaking of Julian, can she distance herself from Devon for about a minute?

It’s beyond obvious that she’s trying to establish a deeper connection with him by showing him childhood videos. But Devon, don’t be mistaken, childhood videos do not equate to showing someone who could technically steal your idea and benefit from it your groundbreaking app inventions.

Someone needs to talk some sense into that boy.

When strangers — though Bradley isn’t exactly a stranger — are noticing that there is some chemistry between you and a woman that isn’t your wife, it’s a problem.

I’m especially upset by how they inserted the conflict Devon is having with wedding planning.

Take it from someone who has planned a wedding just recently — it is a pain in the ass, and yes, it is an endless array of go-to lists that don’t stop once you walk down that aisle.

But, if it’s with the right person, it doesn’t matter.

So, Devon … is Priya the right person?

Because last we checked, she was a budding journalist who probably doesn’t have all that much free time either who is trying to make all this work.

And it would be a shame for her to find out that her future husband was having second thoughts and getting too cozy with some girl from medical sales.

The Resident continues to prove that despite the plethora of medical dramas on our TV screens, this one deserves all your attention.

I’ll keep frequenting Chastain every Monday night, and I recommend you do the same.

Up next: Chastain gets spooky in time for Halloween.