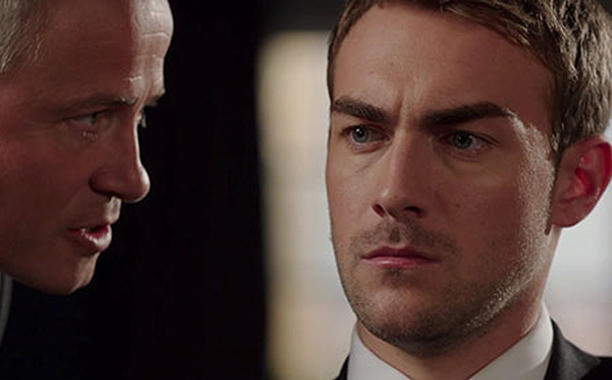 Can you believe the season finale of The Royals is next week? Before we get to that though, let’s talk about this weeks action-packed episode that really aired out everyones secrets and hidden agendas.

The Queen– Her life is the monarchy and she’s not interested in a life outside of the palace walls, especially since she knows Alistair is totally done with her. After seeing Liam’s impressive viral video online, she realizes he’s definitely made to be king. And she’s also convinced he’s Simon’s son. So she decides to put a subtle plan in motion. She goes to visit Prudence to give her some motherly advice; there was a reason Simon wanted to abolish the monarchy. It killed his son and left everyone trapped inside it for the rest of their lives. Is that something she really wants for her child?

Princess Eleanor– Eleanor decided it was time to make the first step and clean up her act. She got rid of the drugs, cleaned up her room and it’s all because her bodyguard truly believes in her. Heck, he’s even proud. And who wouldn’t be? Without all the drugs, Eleanor is a pretty awesome chick who has been let down a few times. Plus, the palace would drive anyone to do drugs just to get by. She gets a call from the girl she met in rehab, Imogen. When they meet in public, Imogen is on edge and asks for a fix, which Eleanor says she wouldn’t give her even if she had it. That’s when Imogen goes off with some guy Dimitiri, who makes it pretty obvious that she’s an escort. How did the princess not catch on to that?

When she gets a second call from Imogen, it’s a bit more serious. After her “meeting” with Dimitri, Imogen was all beat up. That’s when Eleanor decided to help her get a fresh start away from London. Unfortunately, the girls weren’t able to escape in time because Imogen’s “BF” Victor came barging in. Eleanor, who is a undercover badass, attacks him with a door hook before her security detail (plus Jasper) barges in to save her.

Thanks to Eleanor, Imogen is finally free from this life and she’s even made the first steps toward a new life. Unfortunately, Eleanor realizes that she’s the girl who has always been too scared to do that.

Jasper & Co. – Jasper has been trying to get to the bottom of King Simon’s murder. He isn’t convinced that Lucius is responsible, despite his confession and he finds evidence that it was impossible for Lucius to have killed the King since there if footage of him in the palace at the time of the stabbing. Ted brings in Jasper for a stern talk and tells him he’s being reprimanded for investigating the murder, which should have been Jasper’s first sign.

Despite the threat, Jasper isn’t willing to give up because he wants to help both Liam and Eleanor find their father’s killer. He decides to go to the spot where the stabbing took place and finds that he’s being followed by the dude that killed Robert. Robert thought Jasper was following him, but really Mr. Hill was following him. The dude knows the killer is following him so he tried to find the killer first. It was all pretty comical. Jasper later came back to the same area to ask some local kids if they had any secret hidden cameras, which coincidentally they did. As he’s going through the footage, he finds the moment the King was stabbed right there… and yes, Ted is 100% guilty. Yikes.

As he rushes to give the info to Liam, Eleanor tells her brother about what Jasper really did to her. And despite the fact that he’s been trying to redeem himself for a. sleeping with her mom and b. trying to steal from her, she’s not buying into it. Trust issues are deep with that one. Anyways, Liam comes flying at Liam ready to really give it to him when Liam tells him he found his fathers killer. Look, I’m really hyped to see how Liam will react when he finds out it’s Ted, the security detail he trusted with his life. I mean, Ted is Ophelia’s dad and Liam LOVED Ophelia. That’s a low blow.

Liam- Speaking of loving Ophelia, the Prime Minister offered Liam a job with the ministry. She used her ginormous boobs to try to persuade him, which was really slutty of her. Liam definitely considered it given that he’s really sick of the monarchy, but then Wilhemina, who surprisingly wasn’t upset that Liam left her hanging in the shower the night of his birthday party, persuaded him to stick with being a royal. If anyone can make a change within the monarchy, it’s him. #KingLiam isn’t trending for nothing. Plus, the only reason he wanted to go to New York was cause of Ophelia, who we know is dating that other dude because she wasn’t interested in being a royal, which clearly will be hard to go around when Liam becomes King. Although I’m sure we’ll see her again once Liam exposes Ted as a murderer.