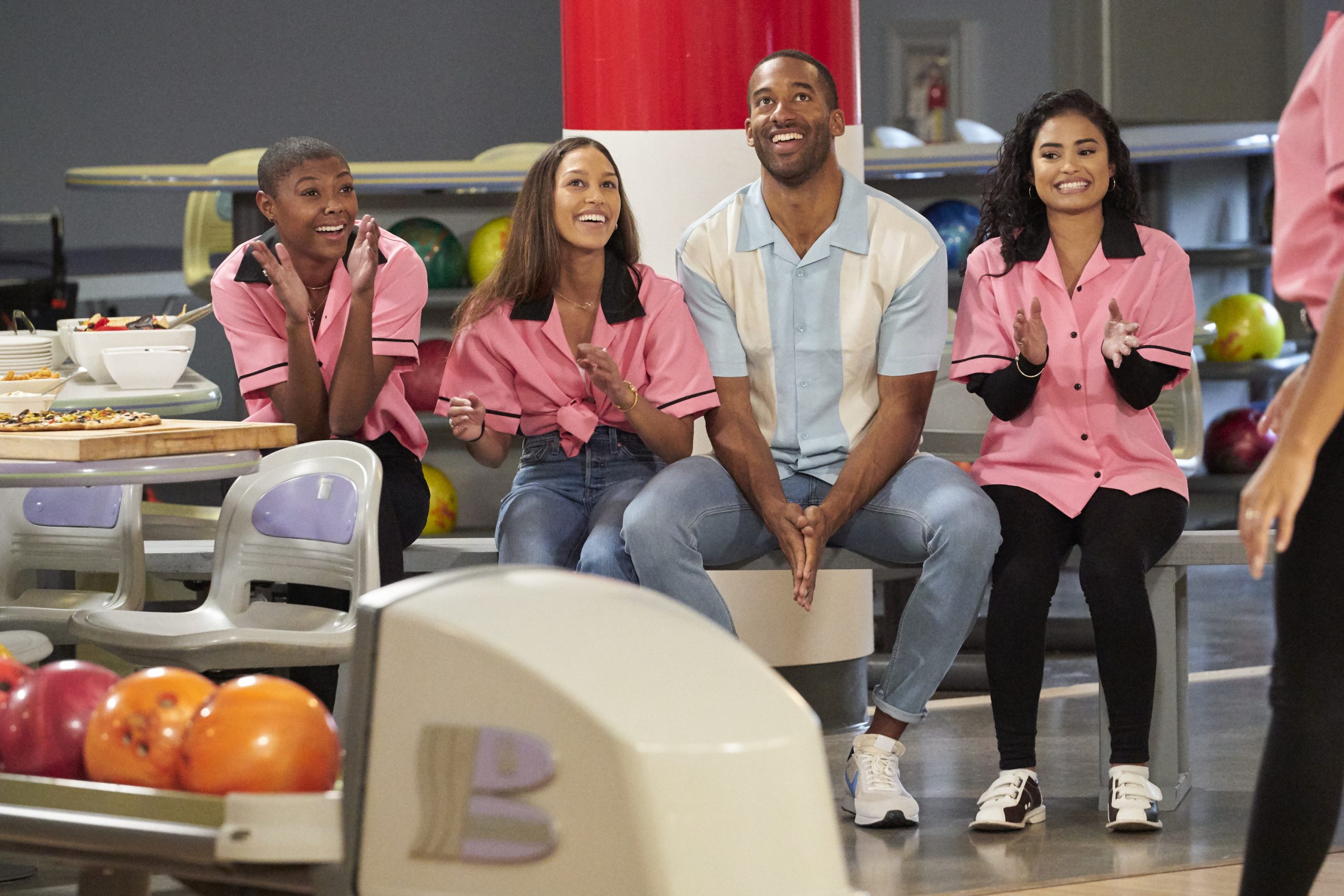 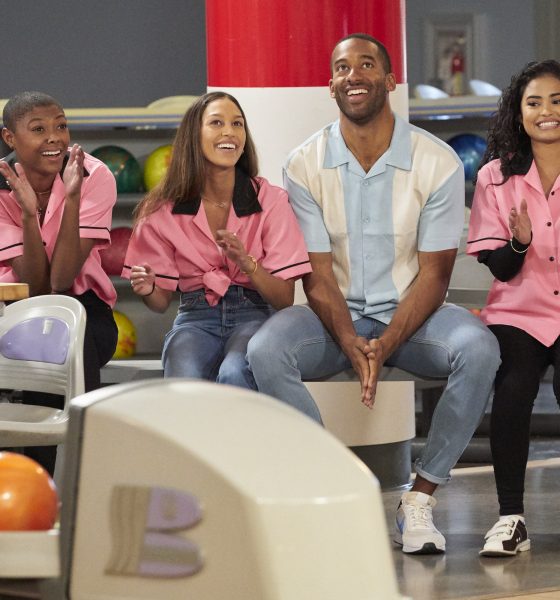 THE BACHELOR - Ò2506Ó Ð Halfway through MattÕs journey to find love, time is running out for the remaining women to strengthen their connection with the Bachelor. Emotions run high as rivals come face-to-face, cocktail parties are called off, and a group date gets unexpectedly competitive. Pieper and Matt take a break from the drama with a romantic carnival date complete with a performance by Temecula Road; and later, tensions are briefly lifted when MattÕs best friend and Bachelor Nation favorite Tyler Cameron stops by. But everything could change when former cast member Heather Martin (season 23) makes a surprise visit to the house, proving that the twists and turns just donÕt stop coming, on ÒThe Bachelor,Ó airing MONDAY, FEB. 8 (8:00-10:00 p.m. EST), on ABC. (ABC/Craig Sjodin) CHELSEA, SERENA P., MATT JAMES, JESSENIA

Several women were eliminated on The Bachelor Season 25 Week 6.

Some of the goodbyes were warranted while others were unexpected.

At the kickstart of the episode, the feud between Jessenia and MJ came to a head. Jessenia seemed confident in the fact that Matt would listen to reason, while MJ had a bit of a breakdown before pulling it together.

However, Matt James choose Jessenia and walked MJ out. This was kind of a surprise considering last week’s teaser promos showed MJ in future episodes. The producers continue to mess with our minds.

Following the tense stand-off between MJ and Jessenia, Matt seemed confident that he knew who he wanted to stay so he cancelled the cocktail party and proceeded straight to the rose ceremony much to the dismay of all the nervous women clamoring for some time.

At the rose ceremony, Magi, Brittany, and Ryan did not get a rose. Magi took it with grace because she knows she’s a catch. Ryan, on the other hand, was emotional upon her exit because she was really feeling something with Matt that she would no longer get to explore.
But the night was far from over and no one was safe.
Katie scored the one-on-one date, but instead of getting a spa day, Matt told her they would be pranking his bestie, roommate, and former The Bachelorette contestant, Tyler Cameron, which is far from romantic.
Katie was a good sport about it and was vulnerable and honest with Matt later in the evening, which is when he confessed that his relationship with her simply wasn’t progressing as much as it was with the other women in the house.
Her exit was the biggest blow, but there’s always the hope that she’ll end up involved with the franchise in the future. Fingers-crossed. And thanks for the feedback!
Where do the other girls stand? Well, it’s unclear because in the final moments of the episode, Pieper’s chat with Matt was interrupted by the new girl and Hannah Brown’s bestie, Heather Martin.
Did Chris say “drama?!”
What Girls Are Left?

Michelle, 27, a teacher from Edina, Minnesota

Who are you rooting for?
And don’t miss reading the best tweets from tonights episode!

The Resident Review – Do Nic and Chastain Survive? (4×05)

Best Tweets from Tonight’s Fantasty Suites on ‘The Bachelor’ 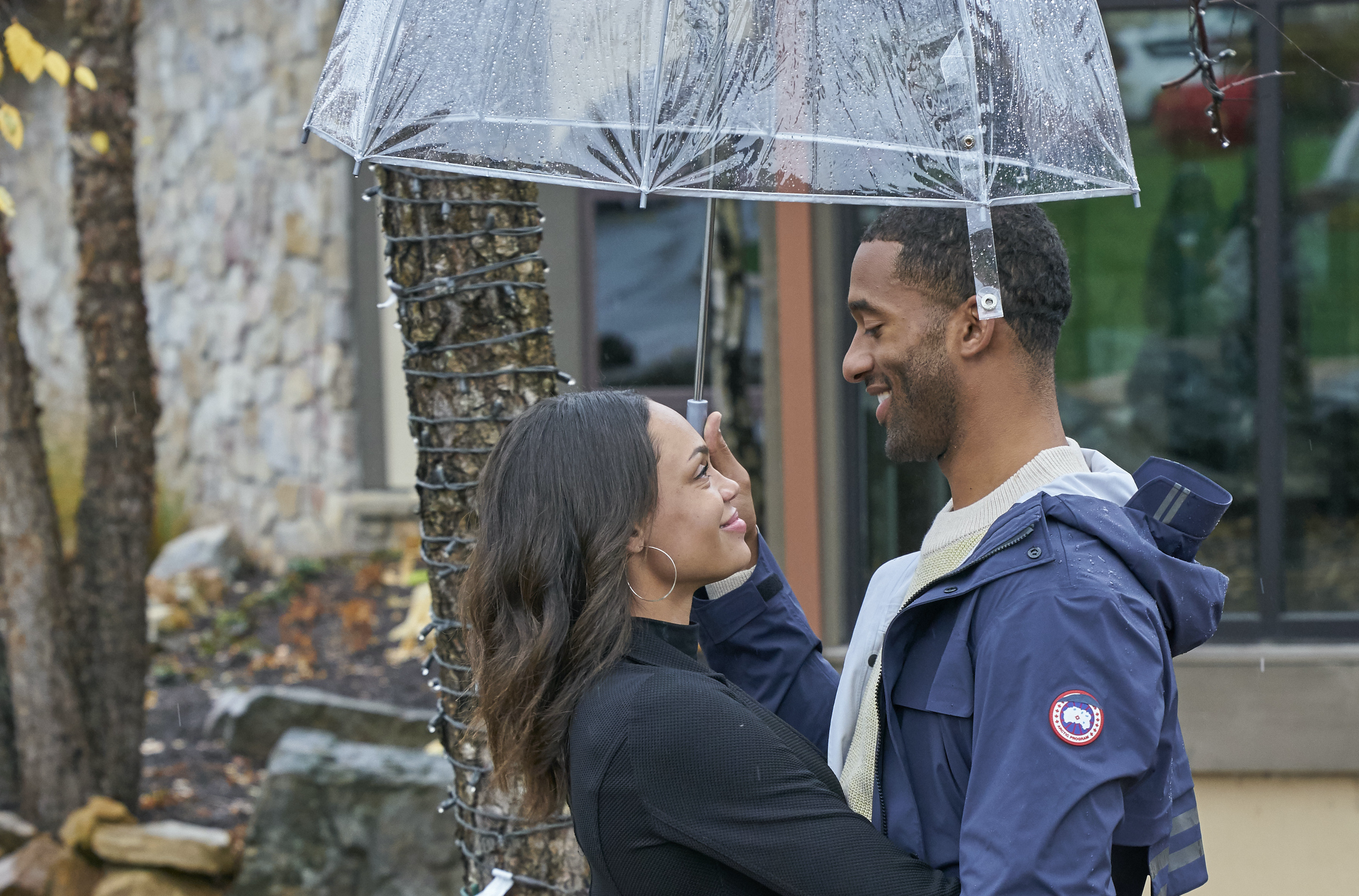 Matt James’ journey towards finding love is almost over… but not before “fantasy suites” with his last remaining contestants — Michelle, Rachael, and Bri!

See the best tweets from The Bachelor Season 25 Week 9 now:

Chris Harrison did not write these this is popular girl handwriting #TheBachelor pic.twitter.com/LKGgu721NH

So no fireworks for Michelle or Bri but for Rachel? I hate this show soooo much! #TheBachelor

my face when the fire works started #TheBachelor pic.twitter.com/ecSQNncRP5

remember when ivan got the air stream for his fantasy suite….. SAME VIBE #TheBachelor pic.twitter.com/g5DaqGSa9n

Michelle: “I’m falling in love with you.”

THESE DATES ARE ASS #TheBachelor pic.twitter.com/bFuheLW8ET

If my fantasy suite date was a camping trip I’d quit right then and there #TheBachelor pic.twitter.com/mmkEB6i1w5

What I thought What it was:
the spa date was
going to be:  #TheBachelor pic.twitter.com/KomcZMtxf6

Me knowing damn well Michelle doesn’t get chosen at the end #TheBachelor pic.twitter.com/fFUVzGAJX9

You know who would be great to moderate this talk between Matt and his dad? #TheBachelor pic.twitter.com/maq9PzAgwg

This feels like when you’re at your friends house and they’re being yelled at so you just pet the dog #TheBachelor #BachelorNation pic.twitter.com/D1fhQTcs1x

Who Went Home After Tonight’s Fantasy Suites on ‘The Bachelor’? 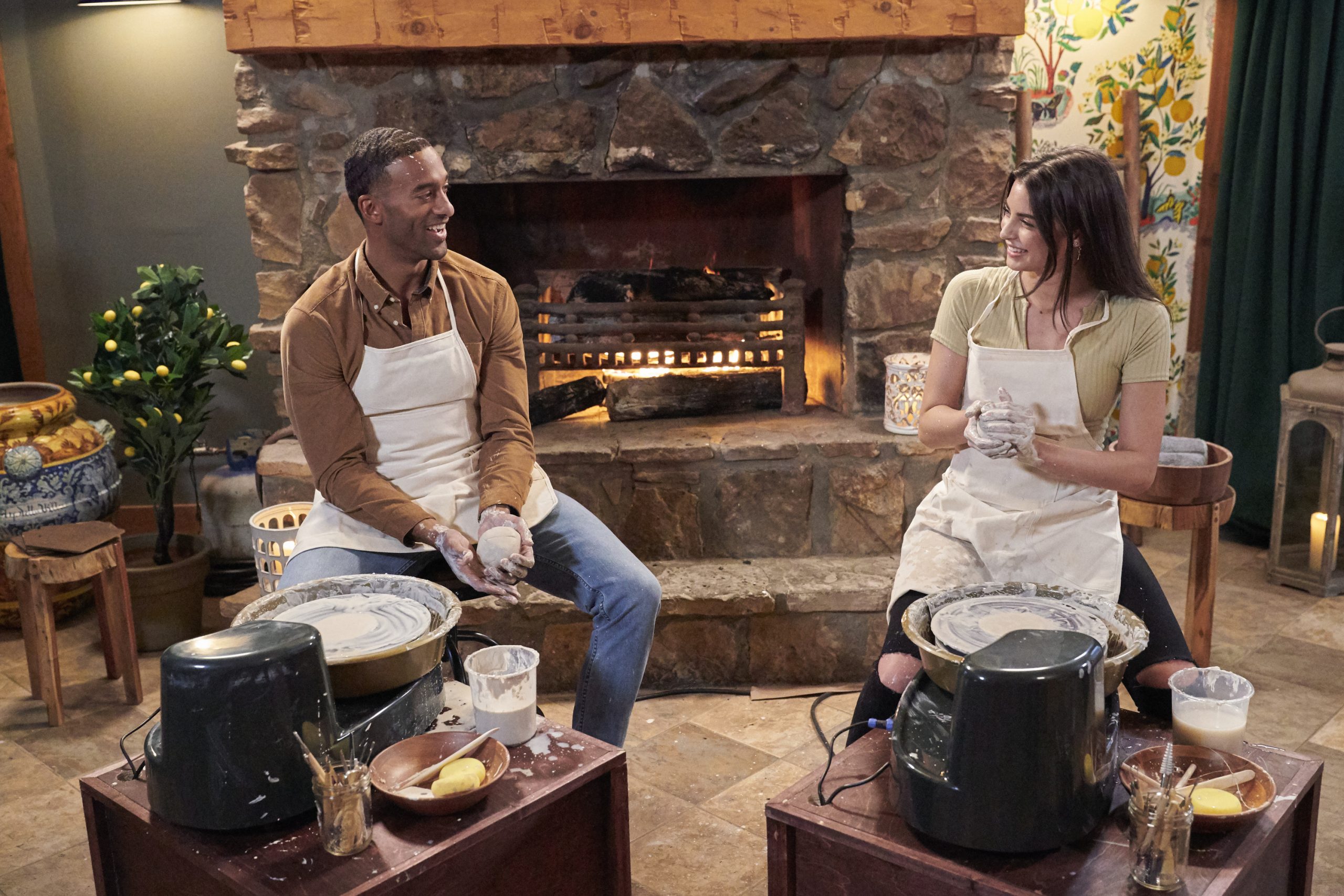 A relationship can’t exist without a little (or a lot of) passion… so Matt James is putting his to test with his final three ladies: Rachael, Michelle, and Bri.

Prior to the dates, Matt had a very transparent and honest conversation with his father about their past, which gave him the clarity to move on and eventually make a commitment to one of the women.

Michelle got the first date, and the duo had a “spa day,” or more importantly, a Pennsylvania spa day that consisted of a butter massage and a milk bath.

The couple then spent the night together.

Bri was the second date and they went camping in the woods.

Nothing like the great outdoors to bring two people closer together.

Fortunately, she wasn’t required to sleep in the tent and the duo retreated back to their hotel room for the evening.

Throughout both Michelle and Bri’s dates, Rachael struggled to cope with the idea that Matt was spending quality time with other women.

When it was her turn, Matt and Rachael took a ceramic’s class. She opened up about her insecurities as he shared his conversation with his father.

And then they finally got their overnight moment complete with fireworks!

At the final rose ceremony, tensions were running high as all the women declared that they were in love with Matt.

And that meant… Bri was sent home. “It would’ve been easy if I could point to one thing and say that why,” Matt said, but he explained that he just had stronger feeling sfor the other two women and “where his heart” was leading him.

Bri said she that while she couldn’t be angry, she was disappointed and sad, especially since she “gave up a lot to be here.” If you’ll recall, she quit her job to find love.

Who will Matt choose as “the one” during next week’s finale?

Best Tweets from Tonight’s ‘The Bachelor’ Women tell All 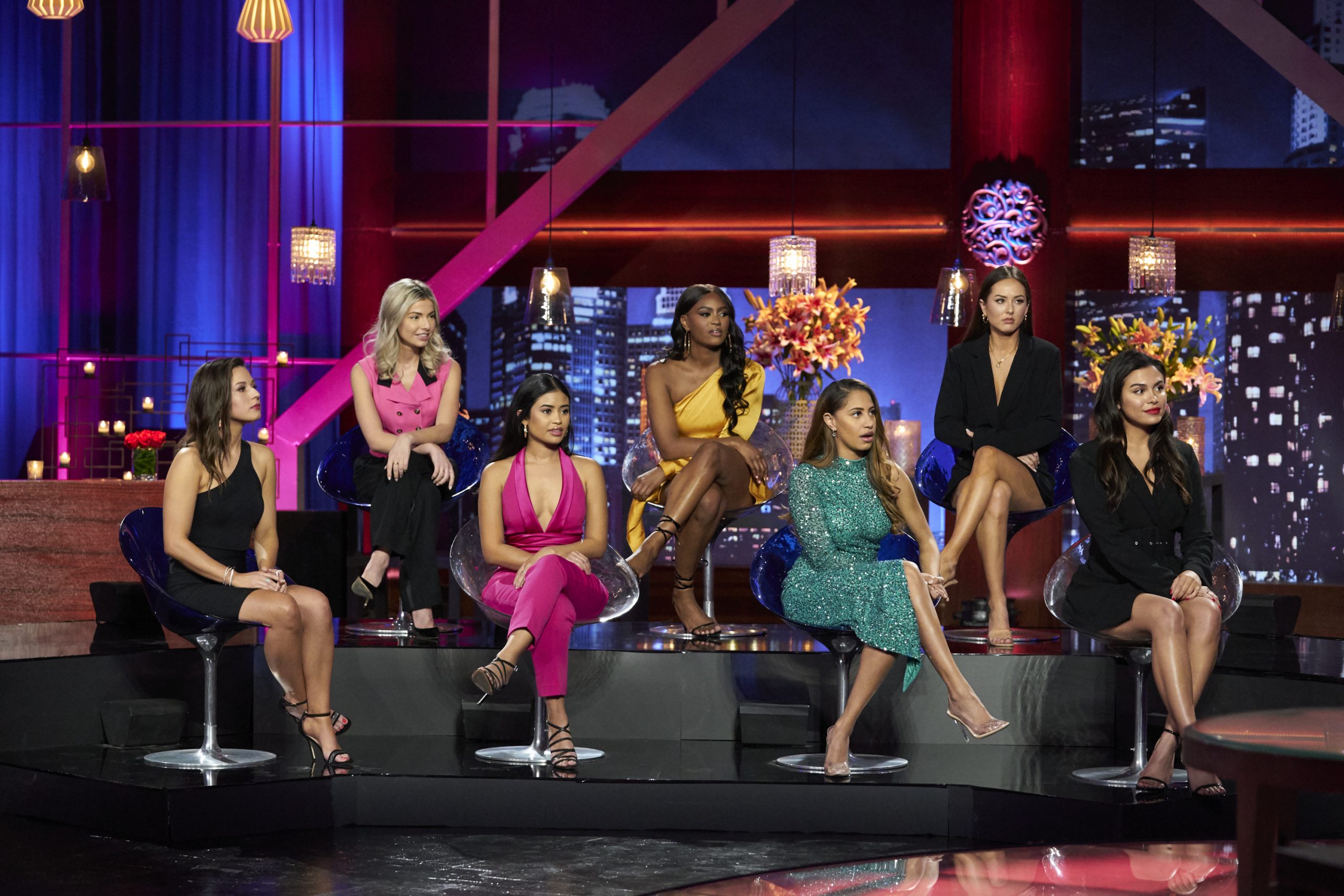 Ahead of The Bachelor finale, ABC addressed the drama this season during the “Women Tell All.”

The episode called out the bullies, addressed the rumors that spread like wildfire, and tackled some of the biggest and unaired moments! Also, Matt James debuted a pretty impressive beard!

See the best tweets from The Bachelor Season 25 Episode 9.

Matt looks like he’s emerged from the forests of Nemacolin after months of soul-searching & PTSD from this season #TheBachelor #WomenTellAll pic.twitter.com/3EmP2qXu1M

Chris Harrison: I can’t wait to see you all again!

Sat through two hours of #WomenTellAll for what could have been an email smh #TheBachelor pic.twitter.com/eWztM2eH3R

me looking for the heart that matt said some of these girls have #WomenTellAll #TheBachelor pic.twitter.com/fOIcOTXKox

victoria can dish it but she cannot take it #TheBachelor #WomenTellAll pic.twitter.com/MFGTwPEpv4

The personality flips of these girls while Matt is here… #TheBachelor #WomenTellAll pic.twitter.com/LepnC4Albx

kudos to serena for not getting swept away in the ~bachelor magic~ and trusting her gut#TheBachelor  #WomenTellAll pic.twitter.com/zL7drpisCN

These women are still going against Katie? #TheBachelor #WomenTellAll pic.twitter.com/zaRFb9nf4C

The Women and Matt: *chilling in a hot tub*

@AbigailHeringer being vulnerable and open about living with a disability, all while bringing the only non-toxic moment of #WomenTellAll…#TheBachelor #TheBachelorABC pic.twitter.com/wMP1Yp6JpA

She showed empathy toward her hater. Empowered sex workers. And looked bad as hell in the process. Team #Brittany all the way. #womentellall #TheBachelor #thebachelorabc pic.twitter.com/sE06bFTD5T

so you're telling me we could have had fun date scenes instead of stupid drama this whole season? #TheBachelor #WomenTellAll #TheBachelorABC pic.twitter.com/wcopv1ZfBS

The bugs were one thing, but raw eggs?!?! #TheBachelor #womentellall pic.twitter.com/wKGmjXpCOA

Katie stood up for every girl in the house. The fact that all of them are attacking her is despicable #thebachelor #WomenTellAll pic.twitter.com/ptRmbXpGaP

All of the girls together watching clips of themselves bully each other throughout the season and then trying to explain how they all share this common goal of “lifting each other up” #thebachelor #WomenTellAll pic.twitter.com/bSJP2dQFM8

trying to figure out how katie is being forced to defend herself more than victoria is right now #TheBachelor #WomenTellAll pic.twitter.com/TzRDJ1DYfC

a bunch of the women somehow blaming katie for the toxicity in the house #TheBachelor #WomenTellAll pic.twitter.com/hxAbq2mk9T

So nice of #TheBachelor to separate the good from the bad #WomenTellAll pic.twitter.com/sDXoB9eUQF

So bachelor producers kept fake rumours about Brittany being an escort but edited out a pancake eating contest….???#TheBachelorABC #TheBachelor  #WomenTellAll pic.twitter.com/SHwK6GUPqc

HOW did these terrible bullies manage to not only keep up the mean girl attitudes after months of reflection but ALSO upgrade their tactics to gaslighting Katie too?!?! #TheBachelorABC #womentellall pic.twitter.com/i24colj6Xb

Check out the best tweets from last week’s hometowns!