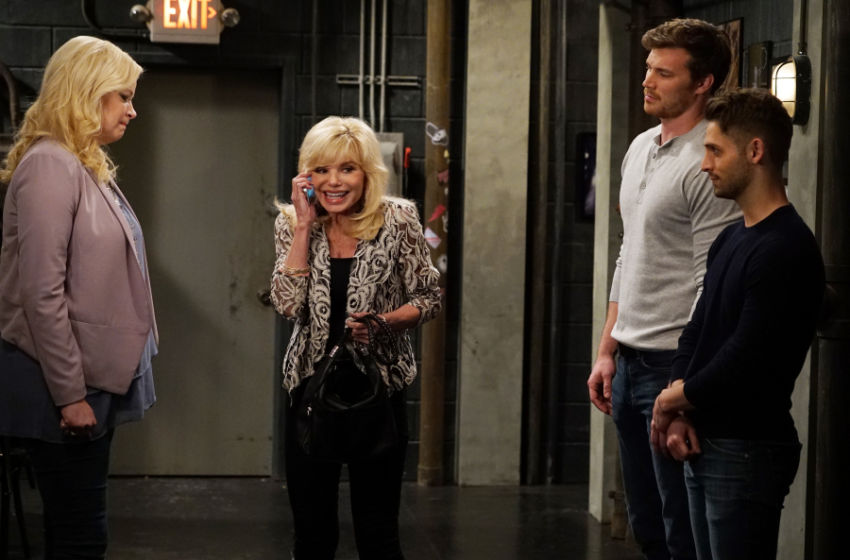 This was obviously hell for Bonnie who pretty much believes her mom is the devil, but the boys didn’t understand cause Nana has always been so great to them.

Bonnie tried to play it nice for Emma but things didn’t go too smooth during family day at school when Nana tried to pose with her the great granddaughter she just met for pictures. A little quibble ensued and Nana Lyle ended up on the floor.

Ben and Danny decided they needed to have mother and daughter talk it out so they tricked them into both attending the same event. That’s where we finally found out why Bonnie hated how mom and it was powerful. I mean we’ve never seen Bonnie this way and this serious. For a character that it ditzy, blonde and proud of her drinking, Bonnie really went through a lot and despite how crappy her mom was about her teen pregnancy, still managed to be a great mom to these boys, in her own way. I have to say, there was a lot of depth to this weeks episode that I never though I’d see on the show. Props to you Bon Bon.

So finally, the boys realized that they were blessed to have a good mother like Bonnie, even if she showed her love in her own and unique way.

Meanwhile, Riley and Tucker teamed up for some improv classes to help them in their careers as lawyer and weatherman. While it was funny, I was a little upset to see that nothing about Riley and Danny’s relationship was touched upon.

Related Topics:baby daddy
Up Next 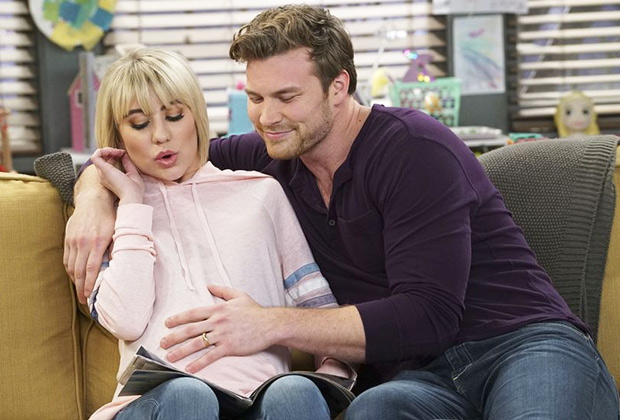 Who else felt a bit jipped by that Baby Daddy series finale?

Ben and the gang were up to their usual shenanigans and not even the birth of Riley and Danny’s first child could keep the tone serious. It may have been a great 100th episode, but it lacked the closure we needed. I guess I’m not content with just knowing things will go on as usual in the Wheeler household but on the plus side, all the “loose ends” were tied up.

Riley had few false labors, which prompted Danny to be very overprotective since the doctor said she could “explode” any minute. The only time he left her side was when he realized he had to get her a push present. Don’t worry, Tucker knows a guy. Seriously dudes, don’t ever think a puppy is an appropriate present. Like Bonnie said, you want her to raise BOTH at the same time? “Even I don’t hate Riley that much.”

Ben promised to be there for Riley in case Danny didn’t make it to the birth but he was also dealing with Emma’s first recital, which caused her to for the first time, inquire about her mother. Ben felt a little jaded that he wasn’t “enough” for his daughter but she eventually agreed to perform with him, which gifted us with Ben proving that he’s THE sweetest father by singing and dancing to “Sweet Pea.”

Unfortunately, he didn’t get to perform at the recital because Riley went into labor at that very moment and he had to rush her to the hospital, which also meant he wouldn’t get to run into Elle, the girl of his dreams.

Having Ben in the delivery room for his ex Riley was kind of like the show coming full circle, since he never got to witness Emma’s birth. While it was adorable that he was such a good brother, I felt like there was a lack of Danny and Riley chemistry, even during the birth. In fact, it seemed like Ben and Elle finally running into each other because she was going to deliver Riley’s baby(as a soon-to-be-doctor might I add) overshadowed the actual delivery, which by the way, would NEVER be that quick and painless. When I say I felt like the finale was glossed over, I don’t think they even named the baby. Seriously, what did they name it?

To sum it all up, Riley cleared Brad of charges and got him out of jail, Riley and Danny became parents, Tucker got a job working for the judge’s new show by throwing around catchy rhymes and Ben found the girl of his dreams, but it was lackluster. They didn’t have any connection, they simply talked and he confided in Emma that if things went well, she might possibly become her full-time mom, which seemed rather selfish. And Emma didn’t even need it because like she said, Ben was enough.

I know the series and the cast weren’t prepared for an end but I just feel like there was so much more story to tell –  I wish we had the opportunity to see Riley and Danny become parents, Elle and Ben’s relationship flourish and Emma and her cousin bond. Maybe that’s just me hoping we had more time because 5 seasons were not enough.

Baby Daddy, a show written off way too soon. All that’s left is Young and Hungry as my guilty pleasure. 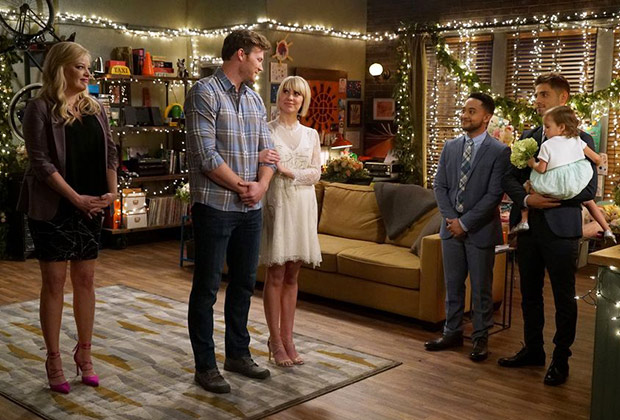 Baby Daddy brought all the feels on this week’s episode with a surprise wedding for Danny and Riley.

Who would have thought that a wedding would actually happen without any interference? It’s rare for the Freeform comedy but definitely a welcome change. It almost seemed like everything was reversed, with Danny and Riley taking their honeymoon before the nuptials.

The two of them embarked on the cruise Mrs. Wheeler bought for her and Brad, before he was sent to prison. While you’d imagine a vacation to be relaxing, nothing about it was smooth sailing. And that isn’t because Bonnie somehow finagled her way into a room next to the lovebirds after Danny specifically asked her not to.

Danny was focused on trying to convince Riley to marry him for most of the trip while Riley was focused on eating and winning every competition. When Riley finally figured it all out, she wasn’t impressed by any of his romantic gestures but instead annoyed that he’d been distant and ignored her the whole time.

Back at home, Ben was ambushed at the bar by a girl named Annabelle in a wedding dress. Right before she walked down the aisle, she heard that her mystery man, her soulmate, the man who she had several meaningful encounters with, finally came for her.

The problem? Ben had no idea who this girl was. This girl literally took a few run-ins with Ben to mean that they were soulmates, just like he’d done with Elle, who for the record, he’s still looking for.

Annabelle decided not to go through with the wedding and went on a date with Ben instead. That’s when she realized, Ben wasn’t as awesome as she’d imagined. She ruined a good relationship for something she thought up in her head.

Ben decided to help Annabelle out and persuaded her fiancee to take her back but then, the wedding still didn’t happen. This girl simply had a case of cold feet, or she watched Runaway Bride too many times. Moral of the story – Ben should stop doing nice things.

On their way back from the vacation, Riley assumed the bar was decorated for their wedding and finally told Danny to give it a rest. This time, she really pushed him past his breaking point – who knew he had one – and realized, she was looking at it all wrong. Danny didn’t care if she was pregnant, or what she was wearing, he just wanted to marry her.

So with the help of the Wheelers and Tucker, Riley decorated their apartment with anything and everything she could find in the $5 Target aisle I presume and the two of them finally tied the knot.

Now that Riley and Danny had their happy ending, will Ben ever find his true love? 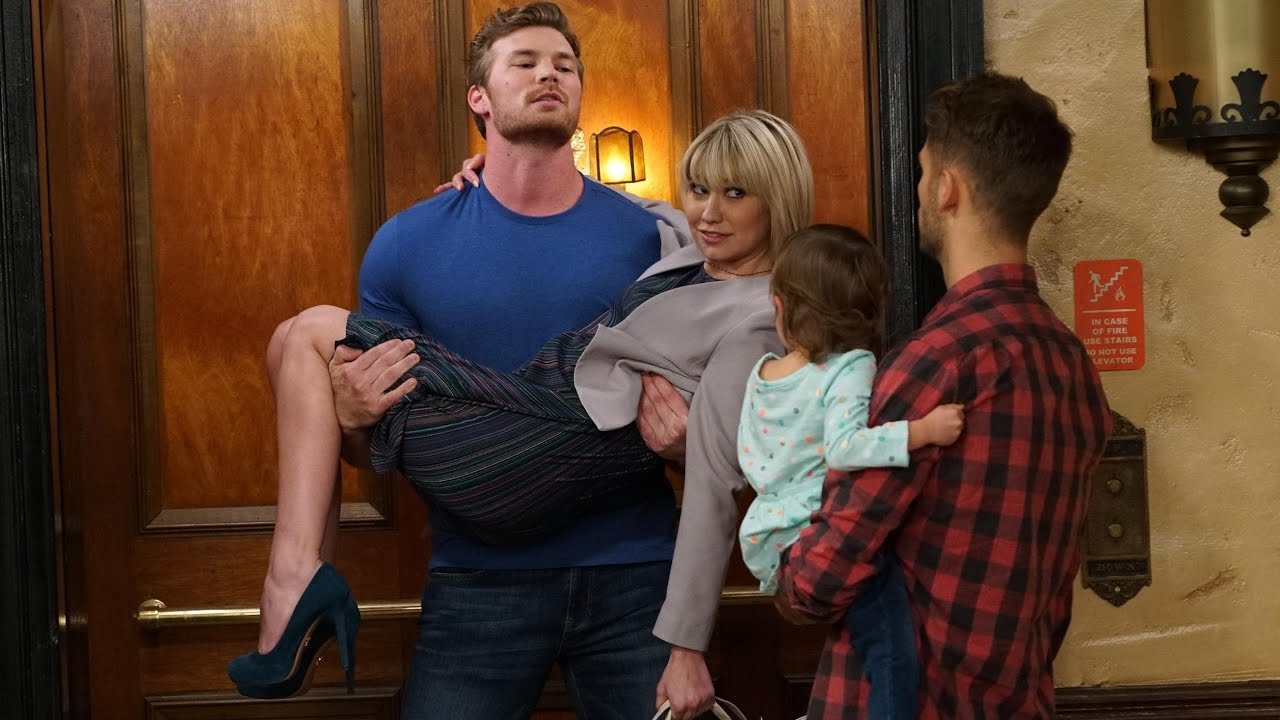 Ben took a break from trying to find his mystery girl Elle this week to rekindle his friendship with Riley, who he felt pretty distant from lately.

Ben’s distraction came in handy however, considering Riley was doing everything possible to stay away from Danny, who became obsessed with a new baby book and feeding her “kale” to make the baby stronger. Yep, that’ll do it.

It’s refreshing to see Ben and Riley’s relationship turn from friendly to romantic to basically “bro and sis.” Aside from getting lost in the woods and eating all the jerky, Riley finally confided in Ben that she was terrified about becoming a mom but more importantly, about not disappointing Danny who she felt was putting a lot of pressure on her to be perfect.

It’s fitting that Ben would be the friend she turns to in time of need considering he’s “ben there, done that.” From his experience no one is perfect and a book will definitely not teach you about parenting. But Ben, like we, knows that Riley will be a good mom though because she’s been there for him and Emma since day 1. If she was willing to stick around and help raise a girl that wasn’t even hers, there’s no doubt that she’d do right by her own child.

Throughout the hike, Danny continued being “obsessed” with Riley and followed them to make sure everything was ok. His intentions were in the right place but he just went about it all wrong. I swear, this show makes him so much stupider than I think the character really is, which is upsetting because it casts a shadow over all the things he really does because of the goodness of his heart. And no one can blame him for hiding out in poison ivy – it’s happened to the best of us.

As for Bonnie and Tucker, the two teamed up once again, this time to help free Brad from jail. Brad swears that Bonnie’s boss Louis set him up and was the mastermind behind the whole scheme and Bonnie, wanting to get her man back, sets out to prove it. She does everything from getting shocked by Tucker’s 11-year-old spy kit, to dressing up as a nun at the confessional, to sticking a phone in her boobs to seduce Louis and make him confess. When he finally does, Brad forgives him and Tucker fails to get it on camera – predictable Tucker move.

All in all, the episode won in finally spending some time nurturing that bond we loved so much between Riley and Ben. Ben might be all sorts of messed up but he’s always been a great friend, brother and father so I’m glad the show put emphasis on it.