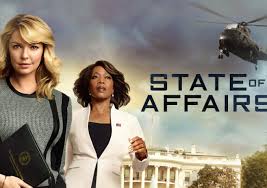 NBC is the number one network this year in ratings! Except that it didn’t do much to get there. They killed off much of their programming for the next fall and are adding new, flashy dramas and comedies. Hit show, Parks and Recreation and Parenthood will be playing out their final seasons. State of Affairs– Literally, the next Scandal. Katherine Hiegl is a CIA Analyst who works for the President helping him make moral and political judgement.

A to Z– A romantic comedy about a couple that almost wasn’t with How I Met Your Mother’s Christin Millioti.

Bad Judge– Rebecca Wright is a wild child, but also one of the toughest and most respected criminal judges.

Marry Me– Another romantic comedy about Jake and Annie. Jake meant to propose after returning from their Caribbean vacation, but his proposal is ruined when Annie snaps at his for his inability to commit stating she hoped he’d ask her to marry him during their vacation.

The Mysteries of Laura- Debra Messing stars as Laura, a brilliant NYPD homicide detective who balances her daily job with two unruly twin boys and a soon-to-be-ex-husband.