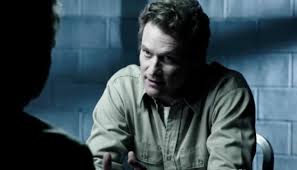 Daddy’s home!! James Tupper who plays David Clarke on the hit ABC drama Revenge has been upped to series regular. This news isn’t that shocking now that we know David Clarke is in fact alive. We kind of expected him to get a permanent job following his very-much-alive appearance right before stabbing Conrad. But what does his return mean for our favorite revengers when they finally find out? Assuming he actually reveals himself. David being alive is literally a game-changer not just for Emily, but Victoria and Charlotte as well.

“That is huge! that changes everything,” star Nick Wechsler told Zap2It. That changes the engine of revenge for next season. What are the implications? We don’t know yet. We don’t know the direction it’s going to take. He has presumably known this whole time that his daughter has been doing this stuff. What does that mean? Was he allowing it to happen? Was he happy about it? Was he not?”
Additionally, much of the past couple of seasons have been very immersed in the past. We were constantly digging up people who used to work with Conrad, who helped frame David Clarke for the bombing of flight 197. But now, we’re living in the present completely. We’ve put all those situations behind us and now its really about living with the realization that Emily’s father is alive, that Victoria hates her and now wants her own revenge, that Aiden is dead but Jack is very much alive. I feel like it will almost feel like a new show.

Wechsler along with executive producers Gretchen Berg and Aaron Herberts discussed what was ahead for season 4 during the ATX Television Festival.

“How it changes the series moving forward is [encapsulated] exactly where Emily and Nolan had that conversation in that sound-booth where she said, ‘I don’t know who Amanda Clarke is anymore.’ She’s really got to start confronting who Amanda Clarke is,” Harberts said.

It is said that David will also cause a lot of problems, namely for Emily and her arch nemesis Victoria. Obviously, Emily is his daughter and she’s been trying to avenge his death, but Victoria is his ex-lover and the two have a complicated history. I mean, lets not forget they have a daughter together! I feel like it is something Emily never thought of; what if her father was here. Would he want her to be trying to ruin Victoria’s life? Would he ask her to stop because he still loved her? It’s an interesting dynamic because Emily hates Victoria and vice-versa. Now with David being back, no one really knows which next move is the right one.

Peace is not a possibility between these two, especially when Victoria finally gets out of the psychiatric hospital.

“She’s done terrible things, she’s obviously a very wounded and messed up character, but at the end of the day, when she manages to get out, she’s going to be setting her sights on Emily,” Harberts teased. “That’s going to be quite a drive, because we did see how Victoria reacted when ‘Amanda Clarke’ was out in the world, and she was bad to her … but when she actually takes stock of all the horribly awful things Emily has done and all the chaos she’s rained down on the Grayson family, she’s gonna be pissed, and she’ll come out swinging. As Emily is trying to create a new, more positive life for herself, as she tries to move forward, Victoria is going to be coming up behind her.”

Emily will also be coming out to the world as Amanda Clarke, which is someone she doesn’t really know anymore. She’s been hiding behind Emily for so long, so seeing how people react when they find out will be really interesting. She’s obviously going to be coping with losing Aiden and that really does open up some doors for the Emily and Jack relationship we’ve been secretly hoping for. I guess it wasn’t a possibility when Emily was still Emily. Jack wanted to be with Amanda and now he has that chance. “This year, Emily has the opportunity to come out as Amanda Clarke … as we get to know more about Emily/Amanda, she has to start confronting all the things she’s left undone and the mess she’s left behind, and how willing is she to clean up messes for all the people who’ve taken such good care of her? As we launch into season four, Jack becomes the center of that turmoil,” Harberts admitted. “There’s really only one character on the show who knows the relationship between David Clarke and the girl who was Amanda Clarke, and that’s Jack Porter. In a year of Emily asking herself ‘who is Amanda Clarke, how do I get back to that?’ Jack’s going to play such a huge component in that.”

“I think he’s crazy about her and wants to see justice being done,” Wechsler agreed. “His feelings for her will draw him into some morally complex situations. He might be willing to do something illegal, but less likely to do something immoral.”

Why Did They Bring David Back?

Well, he’s the only person that can really turn Emily’s world upside down and shake her to the core. With his return, she literally loses sight of everything because the one thing she’s been focusing on for so long is revenge for this man!

“It’s hard to introduce new characters who don’t have a past history with Emily, but will make her invest as much in their character,” Harberts said. “As we looked back, David seemed like someone who would shake an unshakable character to the core. She’s certainly not predictable, but she’s a machine and we know how she’s going to react in certain situations, but we don’t know how she’s going to take it when she finally sees her father. What if he says, ‘I’m disappointed in you.’ And what happens when he crosses into Victoria’s story and says, ‘She did some things to you. You don’t really know why, but there might’ve been a reason.’ [David] is a new barrier to entry [and] he can fill in a lot of the gaps Emily wasn’t privy to.”

What are your thoughts? Are you excited for season 4? Do you think Emily and David will get along? How will she react when she finds out her father never really died?